NEIL SEDAKA Live in Bradford in 1995 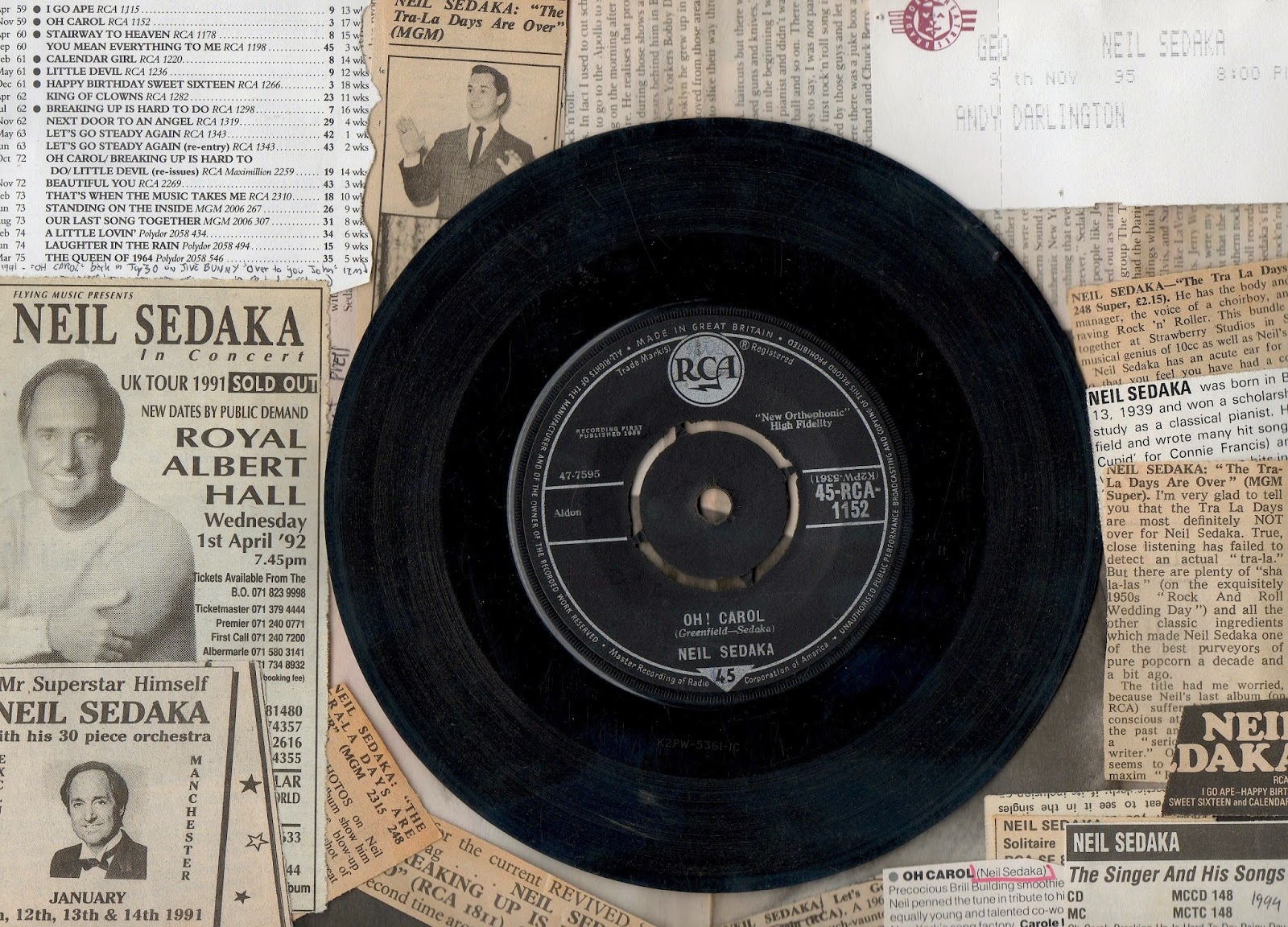 1950’s Teen Idol NEIL SEDAKA is back in the charts with his
heavily TV-advertised new album ‘Classically Sedaka’ (1995),
new settings of Classical Themes. And his promotional tour –
with full orchestra, opens at Bradford’s St George’s Hall.
ANDREW DARLINGTON was there,
before, during and after the event…

‘I hang around the gold-painted pillars, watching the Dodgem Cars weave
and impact, their tall poles sparking as they thrip across the grid.
Watching the attendant ride the cars with easy loping leaps from
one to the other, the girls shrieking as he leans over them.
Talking at them. The words lost by the slightly out-of-phase
treble-drenched records, Neil Sedaka’s “Oh Carol”, Del Shannon’s
“Runaway”, Connie Francis’ “Stupid Cupid”. I love those singles,
but they come vividly alive in new more raucous ways, the
bass-lines thrumming up through buckboards with the
reverberation of the cars…’    (memories of ‘Hull Fair’)


Mid-point in the second half there’s a serio-comic interlude. Neil Sedaka, son of a New York Taxi Driver, plays “Breaking Up Is Hard To Do” in the manner of various classical composers. It’s the kind of routine Victor Borge might once have done, instantly striking responsive sparks off his audience, while also betraying a knowing familiarity with technique and style. He does Beethoven. And if Ludwig Van had known his way around his ‘come-a come-a come dooby-doo down-downs’ he might just have written this way. Then Mozart. Yeah – Rock Me Amadeus. And Claude Debussy, with the liquid lines of the 1962 hit single still detectable there inside its smoky impressionistic swirls.

‘My father worked so hard to put me through Music School’ he confides. ‘I’m so grateful for that.’

Neil wears a burgundy suit with scrupulously shiny patent leather shoes. A quietly striped tie. And his hair, oddly peaked at the front, fringes away raggedly over his collar at the back. An almost impossibly dapper Bank Manager. Even as a 195’s Pop Star he was never actually the stuff of teen-dream pin-ups despite promo attempts at drastic monochrome profiles in ‘Mirabelle’ and ‘Roxy’ – the ‘Smash Hits’ of their day. The album sleeve of his ‘The Tra-La Days Are Over’ (1973) cleverly juxtaposes the two, with his mature self leaning against a huge blow-up of an old publicity mug-shot of himself. And tonight we get both.

He does a ludicrously dumpy little shuffling dance, then jokes about his lack of stature as he screws his piano stool furiously higher. ‘I’m getting shorter and shorter. The people in the front row can’t even see me,’ But when he opens with ‘come and get your memories, you’re not too far from yesterday’ (“Tin Pan Alley”) none of that matters. “Oh Carol”, “I Go Ape”, “Calendar Girl” or “Little Devil” magic up enough memories and yesterdays for this audience without any other visible means of support. 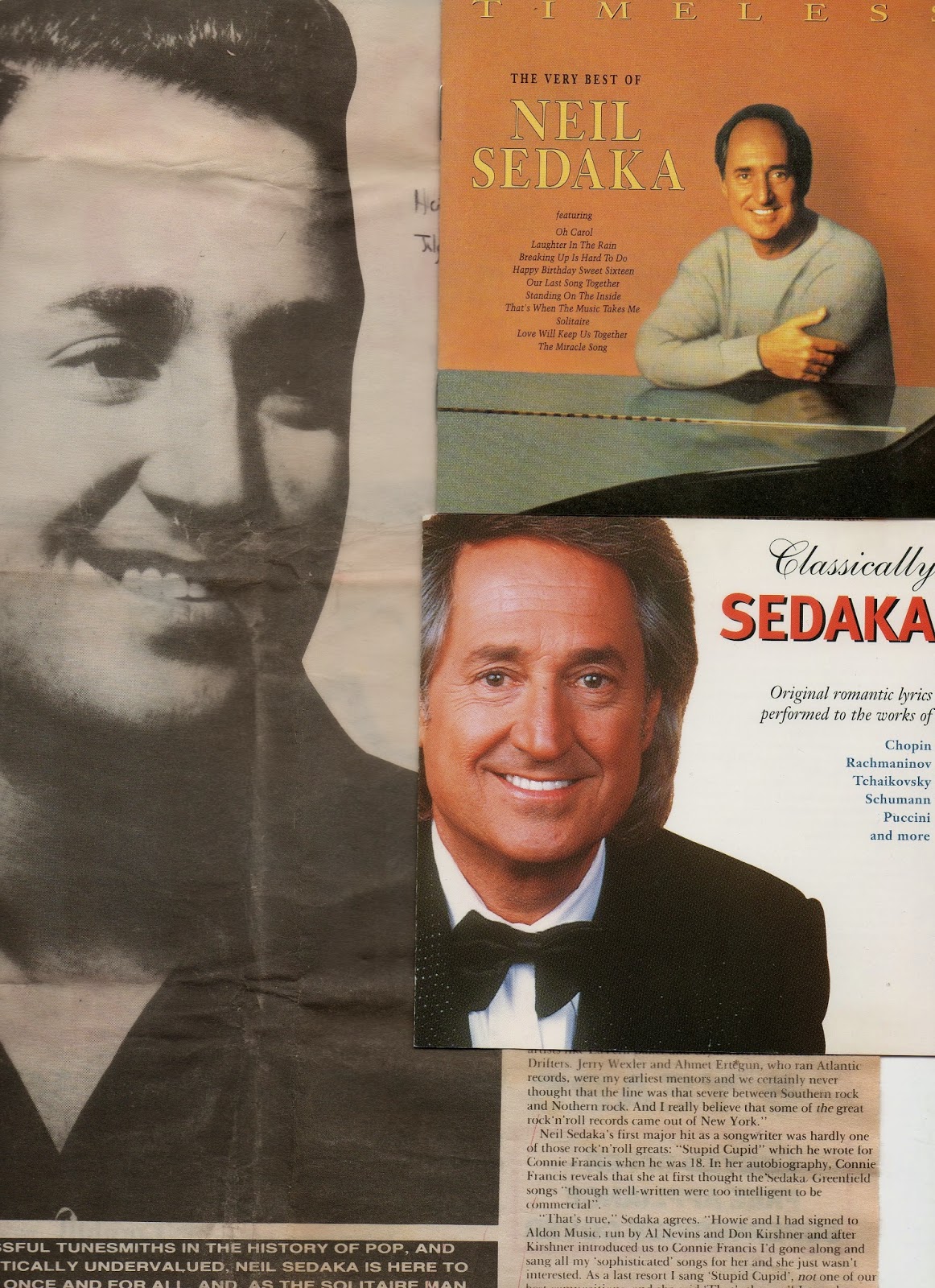 Yet his current album, and the motivation for this high-profile tour – is ‘Classically Sedaka’, a set of songs built around the kind of tunes you hum along with to ‘Classic FM’, two Tchaikovsky’s, Chopin, Verdi, two Beethoven’s, and more of the like. To this end he’s accompanied by enough strings to rot your teeth in a full orchestra conducted by the reassuringly solid figure of Dick Palombi. The live stand-out is “Turning Back The Hands Of Time”, a tribute to his father written around Puccini’s “Nessun Dorma”. And it all ties in. The ‘Music School’ his father drove Brooklyn Cabs to put him through – with the bonus of a recommendation from Arthur Rubenstein, was New York’s prestigious Julliard School of Music. And ‘when I thought of doing a new album I asked myself ‘what can I do that takes me back to my Classical Music roots?’’ he explains in the CD insert. ‘My passion has always been Classical Music’ he adds now. ‘Many people are intimidated by it. Particularly by Opera when it’s sung in a language that they don’t understand.’

The answer – for Neil, was to wrap Pop lyrics around Classical themes. ‘This was a difficult task’ he insists. ‘These pieces were my favourites as a music student. So it was a difficult task. I had a great responsibility, having to marry those marvellous pieces with lyrics that would match the artistic level of the melodies…’

Neil Sedaka’s is an odd story. He is primarily a songwriter. His first hit came with a song called “Stupid Cupid” recorded by Connie Francis. He’d met his collaborator Howie Greenfield on 11 October 1952, a date he considers sufficiently significant to mention tonight. In fact it marks this concert as practically his forty-third anniversary as a songwriter! And between 1958 and 1963 – he tells us smugly, he sold forty-million records. ‘I was lucky to be in at the very beginning of Rock ‘n’ Roll. With Roy Orbison. Buddy Holly. And the great Elvis.’ He briefly illustrates the point by pounding the keyboard with one scrupulously shiny patent leather shoe. But unlike other writers-turned-stars who neglected the former for the glittering lure of the latter, to their eventual detriment – like Gene Pitney, who began by writing “He’s A Rebel” for the Crystals, or Leo Sayer writing “Giving It All Away” for Roger Daltrey, Sedaka never lost his ability to craft perfect Pop. “Calendar Girl” hit no.8 in February 1961, a catchy piece of ephemeral chart fluff with its soaring falsetto carrying the simplest of lyrical ideas – the months of the year, each one tagged to a fairly obvious pay-off line. January ‘you start the year off fine.’ February ‘you’re my little Valentine.’ Yet its irresistibly contagious progression transforms it into a formula that even Stevie Wonder considered worthy of resurrecting twenty-five years later for “I Just Called To Say I Love You”.

And when Sedaka’s first run of hits stopped abruptly with the arrival of Beatlemania, he was able to resume writing hits for other artists such as Andy Williams, Tom Jones, the Fifth Dimension, Tony Christie, ‘the great Elvis’, and… Mae West! Faded Teen Idols seldom get a second chance. For which we should perhaps be grateful. But Neil Sedaka was different. ‘Songs are like my children in many ways’ he claims. ‘They live and breathe. And some of them are neglected children. Ideas come from Movies. Plays. Books you read. People you meet. It’s a very great fortunate gift.’ And he was able to use his ‘neglected’ ‘ten years out of work’ to mature his gift and write himself through the bad times in personal terms he’d never before attempted. 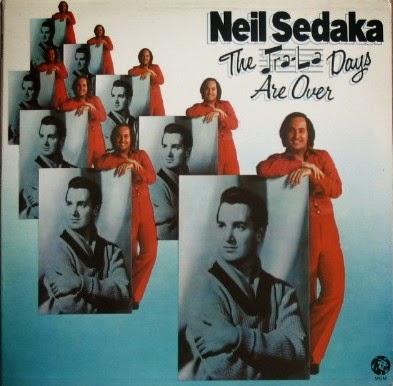 Superficially a love song of gentle regret “Our Last Song Together” actually marks an affectionate but decisive break with long-time writing partner Howie Greenfield, ‘nostalgia just gets in the way… it’s time to turn the page.’ “I’m A Song, Sing Me”, on first hearing a celebration of the power of music, is also a deeply anguished cry of loss and confusion, ‘let me fill the air, the way I used to do… tell me, what did I do wrong?’ Until “Standing On The Inside” documents his triumphant return to chartdom – ‘every waking moment I just wanna sing the news… I’ve kicked away them Blues.’ More, and bigger hits were to follow. “Laughter In The Rain”, with a sax solo from Earl Seymour that’s just about the bee’s knees, gets one of the biggest receptions of the concert’s first half.

But now he’s ‘reinventing the Neil Sedaka career’ yet again. Maturing, as his audience matures, yet carrying a unifying continuity with him to validate and give it all meaning.

‘Classically Sedaka’ takes its starting point from an earlier pre-Rock ‘n’ Roll example of the Pop-over into Classics project, when lyricist Joseph McCarthy put words to Chopin’s “Fantasie Impromptu”, and thus created the Great American Songbook standard “I’m Always Chasing Rainbows”. Sedaka’s neat precise piano interprets its wistful mood carefully. Then Neil’s words to Verdi’s exuberant “Sempre Libera” makes it “Santiago”, a bustling upbeat number, even if the thematic connection between Italian Opera and this fluent South American travelogue escapes me. On the album he also does Debussy’s “Clair De Lune” as a straight but beautifully reflective instrumental, before moving on to Beethoven’s delicate “Für Elise” which becomes “Honey Of My Life” done with only touching piano accompaniment.

Sometimes he has the look of a wealthy Bistro owner greeting valued diners. And nostalgia remains an important element in his show. He packs those superior Juke-Box Oldies in early. They provide the momentum that carries the audience through his newer adventures. But he works with unrelenting energy, and never undersells. That’s an essential part of his continuing appeal. Of course, it’s easy to snipe. The quasi-Classical hybrid has been done before, and seldom with credible results. ELP inflicted their preposterous electro-pomp on Mussorgsky. Argentine composer Waldo de los Rios charted with a speeded-up dance-beat “Mozart 40” (no.5 in April 1971). While, once he’d discovered the sales power of Classics with “O Solo Mio” (“It’s Now Or Never”) ‘the great Elvis’ followed it with a series of Operatic re-treads of diminishing artistic and commercial returns.

But seldom has it been done with such a knowing familiarity of style and technique as it is tonight.

‘I do hope Chopin, Beethoven, and the rest would be pleased with my work’ Neil Sedaka adds.