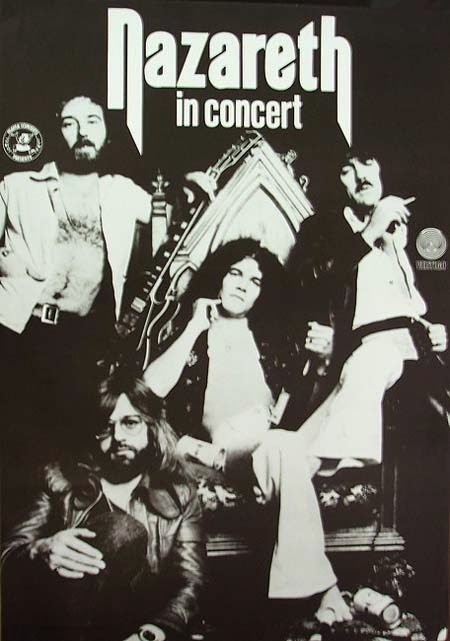 Humberside might be in recession, but for Nazareth it’s business as usual. The ‘City Hall’ is a large echoing labyrinth of Victorian excess better suited to Symphony Orchestras, and more than several bands have retired defeated by its eccentric acoustic properties. But the Naz ride smooth and effortless through a set distinguished by pristine competence, if topographically undistinguishable from any other set they’ve done over the last ten years. Their galvanisation of Joni Mitchell’s “This Flight Tonight” made perfect radio programming sense in 1973 – a no.11 hit, now they do it note for note with big-haired Dan McCafferty’s voice slewing alarmingly from a leap to a hoarse crawl over a vocal range that would stagger seismic print-outs, yet running through the entire gamut of emotions from A to B!

Next they’re doing Tim Rose’s “Morning Dew”, thumb-printed by all the Naz stylistic flourishes, Pete Agnew’s gut-thumping bass riff churning and vibrating on hot rails to hell, yet that energy paced, the climaxes spaced, the sound well balanced. Originally featured on their debut LP ‘Nazareth’ (November 1971), it could’ve been a hit in 1974, or 1976, or 1978, but no – it’s reconfigured into their new 1981 single! Deep Purple archivists in the audience tonight might recall that Roger Glover recorded the song as part of Episode Six in 1966. That same Roger Glover who took producer credits for Nazareth’s breakthrough ‘Razamanaz’ (May 1973) album – boasting hit singles “Broken Down Angel” and “Bad Bad Boy” (no.9 in August) – ‘we’re gonna razamanaz you tonight, we’re gonna razamanaz you ALL night!’, as well as its equally successful ‘Loud ‘n’ Proud’ (November 1973) sequel. ‘Damn right!’ 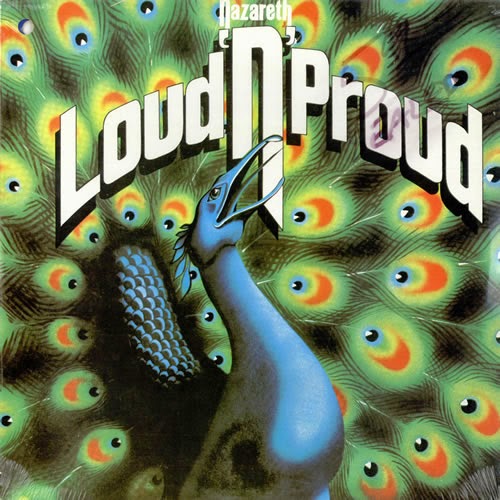 Which was part of the problem, even though it might not have seemed so at the time. The early 1970’s was a weird transition period. Singles hits were suspect. Zeppelin never issued any. Deep Purple and Black Sabbath both had Top Ten hits, but they were spin-offs from epic albums, they were career-exceptions sensibly not followed up. Nazareth – by contrast, embraced the full hits thing, with regular ‘Top Of The Pops’ promotion, caught up partially at the periphery of the sartorially flash Glam thing. “Broken Down Angel” was no.7 in a June chart headed by Wizzard, Suzi Quatro and Sweet. Which devalued their credentials within the heavy-osity pantheon. Too slick and too Pop-melodic for the new Heavy Metal tribes, yet too mechanistic and flash to interest other sub-cultures. The audience tonight is a disparate miscellany with few unifying labels, some denim, some AC/DC flashes, some long-hairs. 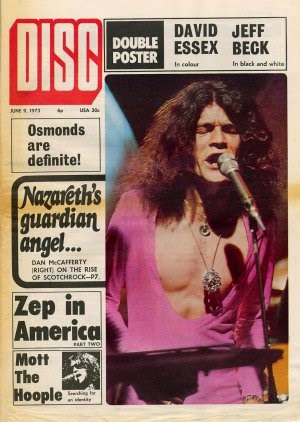 “Love Hurts”, the self-pitying Roy Orbison ‘Mills & Boon’ weepie was lead track on the US edition of their mega-selling ‘Hair Of The Dog’ (April 1975), and radio-play highlight on their 1977 no.15 EP – despite a rival Jim Capaldi revamp of the same song. Here it’s treated to full overkill kitsch, dripping theatrical heartache at full Richter intensity. Best for me, though, is their retread of the Yardbirds’ “Shape Of Things” with Manny Charlton’s tasteful lead guitar embroidering at length all around Jeff Beck’s old vinyl-imprinted chording patterns, McCafferty’s lyrics pleading ‘please don’t destroy these lands, don’t make them desert sands’ suddenly regurgitated into Cold War relevance all over again, his Dunfermline phrasing there in the ‘time and tide’ line. Then they slot JJ Cale’s “Cocaine”, “Every Young Man’s Dreams” and “Hearts Grown Cold” in and around for light and shade, with Darrel Sweet, behind a massive drum-array, never less than adequate. Nazareth is (are?) timeless. Technically awesome, if emotionally vacuous.

Afterwards, the promoters can be heard bemoaning the mere six-hundred punters who traipsed here to be assailed by this near two-hour album-full-of-hits spectacle. But if Nazareth fall between several stools, there’s plenty of empty ones here to fall between! Restraint, like intelligence and ability, don’t exactly bring kudos in what passes for the current Music Scene. But, inoculated into sheer competence by marathon American tours, I doubt if the Naz even notice… 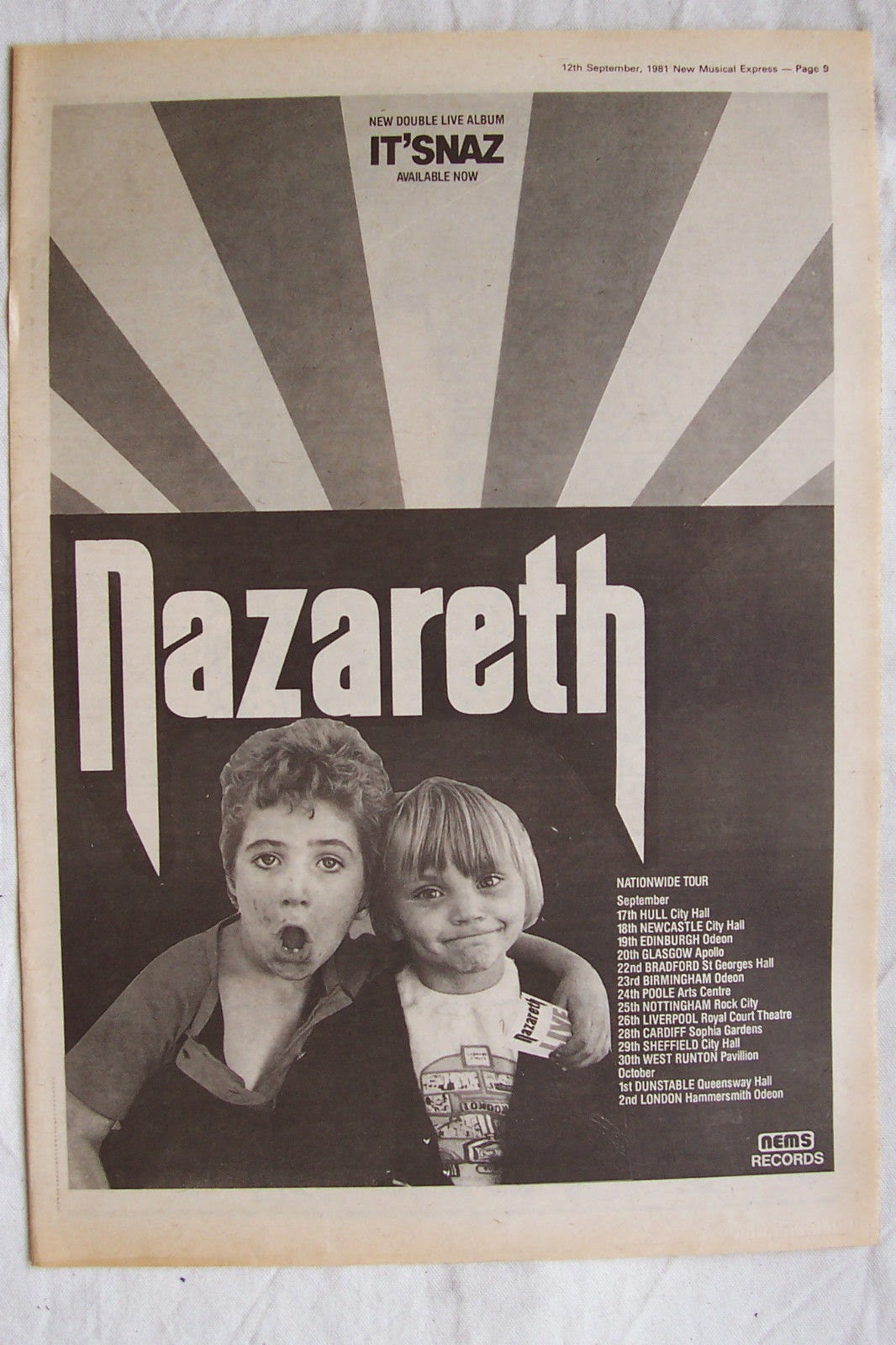 Posted by Andrew Darlington at 20:55

In my mind, I seem to have confused up to now, Nazareth with a local North Carolina band with a somewhat similar trajectory: Nantucket.

Both seem to have been trying very hard for commercial success in a hot genre (Heavy Metal/Southern Rock); but had roots in another style of music (Brit Invasion/Beach Music); each is named after U.S. lesser known geographic locations which were not the point of the groups origins (Nazareth, Pennsylvania/Nantucket, Massachusetts); each had similarly named hits (Love Hurts 75/Heartbreaker 78); both faded in the early 80s -Nazareth more so -; and both groups continued playing well into the OOs.

I have no memory of Nazareth, but I do have a Nantucket memory with a Scottish connection. Nazareth, in what I think was 1981, was supposed to be playing at North Carolina State University at some sort of outdoor campus festival. The event was rained out at the last moment. Our dorm was next door to the festival and somebody went down to see if they could get the band to join us at our dorm room party. They didn't find the band, but did find some Roadies. The Roadies were fine, until they showed an amazing ability to suck down a huge amount of beer from the keg. With concerns as to supply shortage (many of the folks were underage and could not easily get more) a moment of panic ensued.

The solution was solved by someone put on his tape of Scottish bagpipe music on the stereo and turned up the volume: which acted much like garlic to vampires and drove the roadies away.