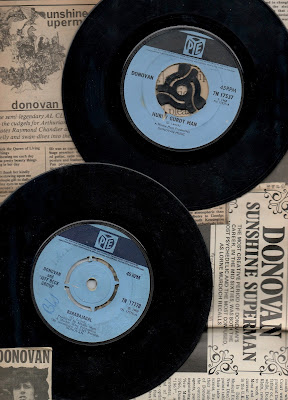 I originally bought the Pye red-label single of “Catch The Wind” as a love-token for Val, a girl I fancied but was too tongue-tied to tell. She subsequently proved hardly worth the 6s 9p, and I’ve since regretted not keeping the record myself. But here it comes again, in a variety of versions and formats. Donovan Leitch was a tousle-haired mistrelsy wisp of wistful myth with would-be poetics that rhymed ‘when the rain has hung the leaves with tears, I want you near, to kill my fears.’ No awkward Dylan hard edges of reality. Donovan is for dreamers, with stars in his eyes and his eyes on the stars. When he needs politics – as in “Universal Soldier”, he borrows them from Buffy St Marie or Bert Jansch.

‘Good Morning Mr Leitch, have you had a busy day?’ taunts Paul Simon from the mid-break of “Fakin’ It”, I still don’t exactly understand what that means, but yes – just lately Mr Leitch’s back-catalogue has enjoyed some very busy days indeed. Of course, he rose and fell across the 1965-1974 stretch covered selectively by the 22-track ‘The Collection’, but rises again into the new ‘Donovan Rising’ double live set caught 1982-’86. Naturally there’s some duplication, from the aforesaid “Catch The Wind” on through. 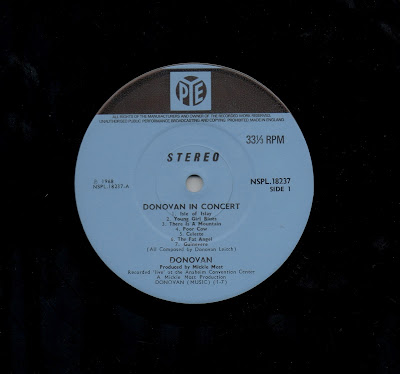 Then there’s ‘In Concert’ – a souvenir from a 1968 Anaheim Convention Center gig with ‘the very debonair’ Harold McNair on flute, and drummer Tony Carr. A Donovan for dreamers. Here, it’s recounted how the sheer magical intensity of audience applause exorcises even the rain and makes the sun shine through freshly-spun fleecy clouds, a ‘Sunshine Superman’ indeed. It’s a moment matched on the later concert album, with Pentangling Danny Thompson on resonant double-bass, when Don interrupts perhaps his finest song – “Hurdy Gurdy Man”, to tell tales of extraordinary madness with Gurus John and Paul, visiting the Maharishi. And the period celebrity-count remains high – “Fat Angel” on ‘The Collection’ is about Mama Cass, with more flower-age reference-points dropped into “Sunny South Kensington” – Allen Ginsberg and Mary Quant, plus Dylan and Joan Baez in “The Trip”, while ‘In Concert’ takes us further and deeper into hipness as he urges us to ‘fly Jefferson Airplane’. 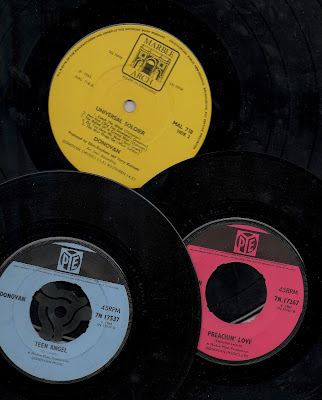 Pared back to acoustic, Donovan comes on frail, sensitive and elemental, a proto-Bolan sprite of nature, excelling on the Folk-pure Celtic simplicity of “Isle Of Islay” or the Movie theme “Poor Cow”. While electric – with a Mickie Most production, Led Zep’s John Paul Jones in the mix and Jimmy Page soloing (on “Sunshine Superman”), while Paul McCartney adds whispered vocals to “Mellow Yellow”, he could be inspired and yes, sometimes even COSMIC. Silly? Sure – he’s that too, but even at his most psychedelically excessive he never loses the ability to weave skipping reels of rhyme into semi-precious confections of pretty wisps of tune.

On “Mellow Yellow” live 1968 he reminds us that there were other, more fleshy pleasures around at the time too – ‘I’m just mad about fourteen-year-old girls’ – sure, tell THAT to ‘Childline’ Don! But the 1970’s were hard on dreamers, it all swallows itself up into “Cosmic Wheels” (on ‘The Collection’ and ‘Donovan Rising’), and “There Is An Ocean” from the Andrew Loog Oldham-produced ‘Essence To Essence’ album in 1974, by which time Don was well into eclipse and had temporarily run out of celebrity. Until now. Me – I’ll still stick awhile with these original statements – ‘histories of ages past, unenlightened shadows cast’, though he does manage to look passably tousle-haired and minstrelsy even now, surrounded as he is by seven stars on the new gatefold sleeve. And I can’t help but wonder if Val still plays that Pye red-label “Catch The Wind” once in a while, and thinks of me…? 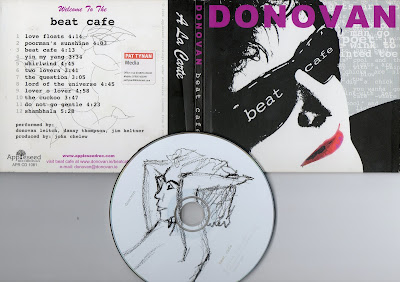 Donovan’s major contributions to the across-the-counter culture occurred within that magic circle of the 1960’s. Since then he’s maintained a lower profile. Some prefer to view their romantic poet-troubadours from a safely posthumous perspective. But in a career move that fails to meet those expectations, Donovan’s still very much around. Here he’s drawing on the ‘Beat’ routes that were already evident in the stoned melancholy “Sunny Goodge Street” (1965), a track from his second album in which he’s ‘listening to sounds of Mingus mellow fantastic’ with Terry Kennedy’s sparse arrangement using double-bass, cello, brushed drums, and flute. And didn’t Allen Ginsberg cameo in his “Sunny South Kensington” (with virtuoso Danny Thompson already there on double-bass) a couple of years later? Sure he did. Not to mention those ‘Beatniks out to make it rich’ from “Season Of The Witch”.

Right, so now he’s off with the Dharma Bums in a virtual Beat Generation café with a ‘poet in a beret, as the sax he blew, and the bongo boy – go man go,’ to a finger-clicking ‘Fever’ groove that just oozes hipster cool. These are rhythms that pour ‘out of my head, and onto the page.’ Into a liquid vibe on “Yin My Yang” that blacks some whites, days some nights, and where she even wears flowers in her hair. Who else could get away with that in 2004? There’s an effortless tight-but-looseness here where “Love Floats” on Danny Thompson’s pulse as Don urges ‘let me come in,’ his voice spaced in tasteful echo dual-tracking and chanted incantation. Then “Whirlwind” with his vibrato quaver sliding over a teasingly repetitive guitar figure and Danny’s eerily resonant ‘into the mystic’ bowing. While the traditional “The Cuckoo” may have already been recorded by Kristin Hirsh, and by Danny himself in his Pentangling ‘Basket Of Light’ incarnation, but Don throws it a new spin. For these are tracks that stack up strongly against the new acoustic whimsy of, say, Belle & Sebastian or Kings Of Convenience. Dylan – Thomas not Bob, advises ‘old age should burn and rave.’ He does that here too. Poetry? – remember “Atlantis”? So – hey man, here are some intriguing variations for a well-cool Mr Leitch, while staying well-within his already-defined continuum.

Great piece! The bit on "Fakin ' It" was actually Beverly (aka Beverly Martin) who Paul Simon latched onto during his month break from Garfunkel over in the U.K. and as legend would have it, had just been involved with Donovan.