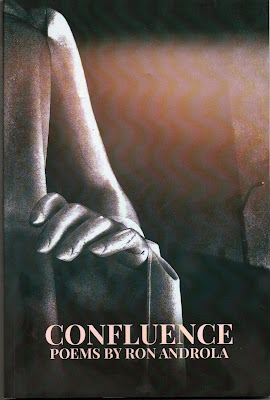 Don’t be alarmed, you’re inside a poem. And yes, everything is a poem. All that’s required is the insight and perception to see it. Ron Androla is an original. An authentic voice. He’s old enough to know, although we might be made of stars, we’re subject to fleshy failures too. ‘Confluence’ is the act or process of merging. Well, maybe, but this is a singular no-compromise voice. In “Digging For Inspiration” Ron lists Ray Carver, Bukowski, translated Rimbaud, Jack, Beats, New York murderers, dead Russians, dead poets, live poets. Which sets up a notoriously unreliable sat-nav of direction points. In fact, his long grey thin ponytail is a rope to nowhere, and everywhere. Since 1980 he’s located in Erie, Pennsylvania. 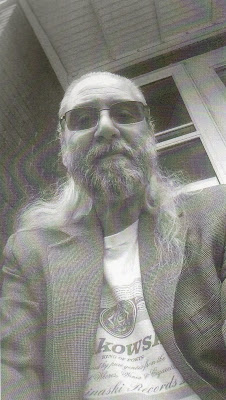 We’ve sporadically intersected since the mid-1970s when we appeared in the same disreputable Indie small-press journals, and zipping down the contents-page, his is always the name you riff to first. The debut, apparently, was Richard Peabody’s excellent ‘Gargoyle’, while he grafted at a sewage treatment plant in hometown Ellport. Seldom, if ever since, do his thorn-and-blood word-pits let you down. Ampersands (&) and abbreviations (yr) spatter, as though his mind’s chain-of-detonation races so fast, fingers pecking at keys scramble to keep up. You have to bleed, he says, to know blood. Poetry, he says, reverses our mouths. An unremembered poem wakes him beneath black night sheets. Another poem bursts dopamine into bloodstream on its way to cerebral flashpoint, to nail molecules to the rush of eternity. A place where atoms bloom and germinate, and poems are biological constructs that breathe by way of rhythm and sound. “Shrinking” is also an eerie vid-clip on ‘Belinda Subraman’s Gypsy Art Show’, charting the metamorphosis inflicted by aging, some body-places imploding, others sagging, some hollow, others thickening in a disturbingly malleable switch-trade. The brain ticks and records each fleshy betrayal. Ron says as how he’s always writing his first poem and always writing his last poem and always writing between poems. That’s what writers do, with every twitch and spasm of mortality. And while the world fails us, these poems rarely do. 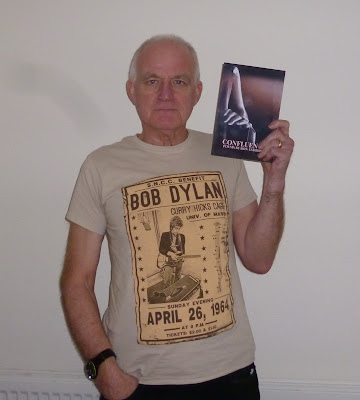 Posted by Andrew Darlington at 15:20