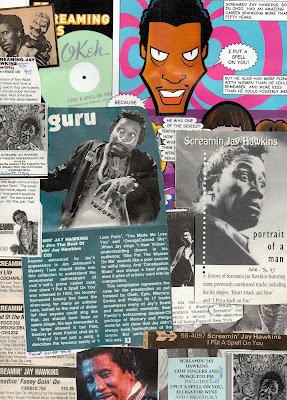 SCREAMIN’ JAY HAWKINS:
HE STILLS PUTS HIS SPELL ON YOU…


‘I really HATE that kind of music’ says Bela, stabbing the cassette off in Jim Jarmusch’s 1984 debut movie ‘Stranger Than Paradise’.

‘It’s Screamin’ Jay Hawkins, and he’s a wild man, so bog off’ retaliates the Beat Girl in this black-and-white celluloid kitchen sleazorama filmed in original Spellavision.

Shock-Rock for Gore-Hounds. Wild man Screamin’ Jay laid down the ground-rules that Lord Sutch, Crazy Arthur Brown, Alice Cooper, the Cramps, the Damned and ‘The Addams Family’ would pick up on in their own separate timeframes. A grinning skull. A Juju hand. The onstage coffin you saw in ‘American Hot Wax’ (1978)… and a cannibal bone-through-the-nose goofiness. Screamin Jay is the original Rocky Horror-show.

For Jalacy Hawkins (18 July 1929 – 12 February 2000), born in Cleveland, Ohio, his commercial success was brief – it began and ended in 1956, but his notoriety for macabre theatrics haunted him on down the long decades since. In some ways it served to put a voodoo hex on his very real ability as a R&B blues shouter of some considerable power. Perhaps he realised that? But he continued to replay the role as if stuck in a Hammer Horror freeze-frame.

There was a brief window of opportunity for re-assessment when his ‘Levi’s’ ad-aided cover of Tom Waits’ “Heart-Attack And Vine” lifted him all the way to no.42 on the UK chart in April 1993. The ‘B’-side was a Dance-edit of his signature hit “I Put A Spell On You”, coming around again after Bryan Ferry’s lack-lustre crawl through the song, as well as following earlier chart reruns by Nina Simone and the Alan Price Set. This supernatural clash of skulls was lifted from his reactivated and hastily re-promoted 1991 CD ‘Black Music For White People’.

But unfortunately this was part of a sudden opportunistic gridlock of CDs, and this worthy abundance of back-catalogue material tended to blunt the sales mobility of his then-current proper set – which was ‘Stone Crazy’. Yet certain elements are interchangeable. He still overtrades the basket-case quotient into a whammy of a Mau-Mau feast full of well-wired weirdness. And the basic humour-line still runs like the result of a Mad Scientist’s experimental studio gene-splice vivisection of John Lee Hooker and Bernard Manning. For every stone-gone gem like his reading of Tom Waits’ “Ice Cream Man” or the Smiley Lewis classic “I Hear You Knocking” on ‘Black Music For White People’, there’s a hammy “Ol’ Man River”. Just as his “Sherilyn Fenn” (‘the whole time the movie played, I was thinking how good it would be to get laid’) is marred by the ‘Late Night Hawkins’ of “On The Job” and “Call The Plumber” on ‘Stone Crazy’. Where they need some grit and soul, both albums are given inappropriately clean production sheens by occasional co-writer Robert Duffey. And both also come from the critically well-credible Demon stable via a fortuitous link-up with Frank Zappa’s Bizarre label, which first had the good grace to rescue the Voodoo-Guru from a ten-year studio silence. 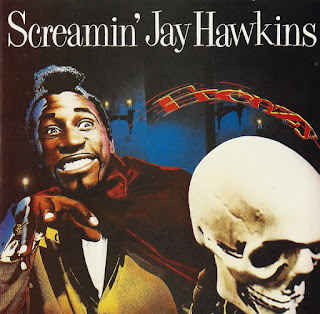 Yet the third CD in this triad – the earlier compilation ‘Frenzy’, despite further blunting the sales mobility of his brief TV-advertised window of opportunity, is the original stuff. A fourteen-track set drawn from his Okeh recordings from the 1950s, sparked by the primal “I Put A Spell On You”, including an “Alligator Wine” dripping with surreal spookiness, and “There’s Something Wrong With You”. But there’s some campy fillers here too. By mismatching the insanity of “Frenzy” with the attempted legit croonery of “I Love Paris” he provides some evidence of a genuine, if misguided vocal dexterity and a desire to expand out of Pop-Rock’s Novelty Room. An imbalance that never quite achieves career equilibrium.

But what the hell – when he’s good, he’s spine-chillingly good. Check out that TV jeans-ad again on ‘YouTube’ – ‘liar liar, with your drawers on fire’, and give thanks to the Satanic gods of Juju for that. Even the ‘Observer’s movie-drone Philip French was moved to praise Hawkins’ ‘massive impassive presence in Jim Jarmusch’s later more acclaimed ‘Mystery Train’ (1989). 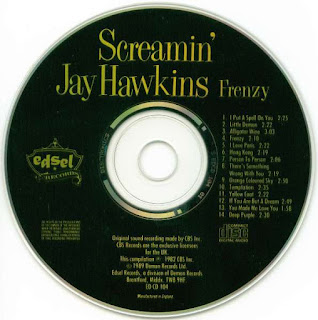 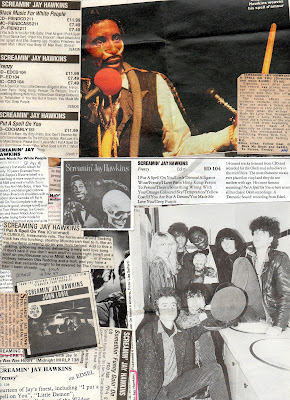 Posted by Andrew Darlington at 16:20

Ever wanted to get free Facebook Followers?
Did you know you can get them AUTOMATICALLY & TOTALLY FOR FREE by getting an account on Add Me Fast?

Start following our signals today and profit up to 270% daily.

BlueHost is definitely one of the best web-hosting company with plans for any hosting needs.