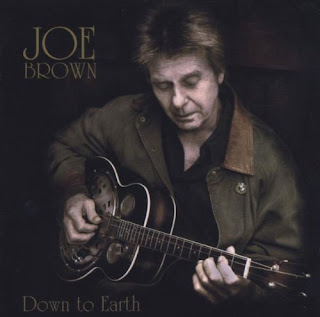 
There’s a tendency to take Joe Brown for granted. Which is a mistake. Chirpy Cockney image-associations and catchy hits on sixties nostalgia compilations tend to relegate him to the margins. Which only serves to emphasise his status as a neglected treasure of British Rock ‘n’ Roll, in much the way that Lonnie Donegan was prior to his timely rediscovery. In fact, in this CD insert, Joe is pictured backstage at Glastonbury with Lonnie (alongside guesting Jools Holland). Now, Joe presents himself as the self-styled ‘ghost of Rock ‘n’ Roll’, come back to haunt this push-button age of synthesised adventures and press-switch/get-rich thinking.

There are thirteen tracks, a song-selection Joe described to Janice Long as the album’s ‘building blocks’. Three new Joe originals, three trad: arranged Joe – including “Gallows Pole” which is reinterpreted from the ‘Led Zeppelin 3’ version and given another twist by alternating verses with daughter Sam, a formula they repeat on “Reuben”. Elsewhere Joe’s more weathered lived-in voice is perfectly matched to the world-weariness of Dylan’s “Well Well Well”. The beautiful steel guitar pictured on the insert picking out haunting electric-slide licks easily equal to his nods in Ry Cooder’s direction. He chooses Paul Simon (“One Trick Pony”), Richard Thompson (“The Dimming Of The Day”), Tony Joe White (“As The Crow Flies”), Bill Monroe (“Uncle Penn”), and McGuinness-Flint (“Malt & Barley Blues”). With just one song – Hoagy Carmichael’s “Lazybones”, reaching out of the rootsy ‘Down To Earth’ genre, back to Joe’s earlier ‘56, & Taller Than You Think’ album (1999). It’s a family affair, with son Pete producing what Hugh Fielder accurately calls a ‘grown-up album… tight, no frills, but with purpose’. It’s a mistake to take Joe Brown for granted. As this album proves, he’s far from a ‘One Trick Pony’. Something worth remembering. 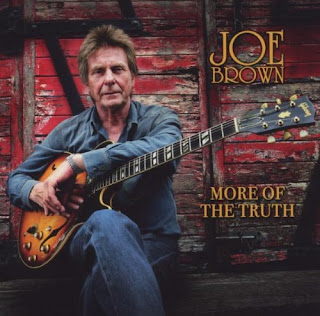 Joe Brown is now a heritage artist. Here he embraces Rock ‘n’ Roll tradition from Elvis’ “All Shook Up” to U2’s “I Still Haven't Found What I’m Looking For”... 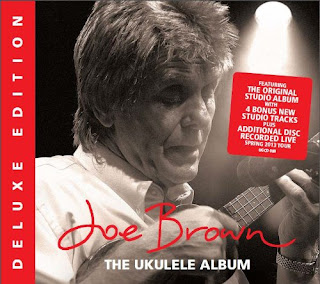 Curious instrument, the ukulele. There’s just a chance George Harrison adopted it when learning the sitar proved too problematic. George is here as author of the Wilbury’s “Where Were You Last Night”. The other star of the four-stringed uke was, of course, George Formby, and Joe does his cheeky nudge-nudge “When I’m Cleaning Windows” too. Joe’s project to raise the instruments profile peaked with the 2011 release of this definitive album, now reissued with bonus tracks plus a live CD taking in early hits “Picture Of You” and “That’s What Love Will Do” as well as a new uke-friendly take on his once-upon-a-time B-side “Hava Nagila”. Joe’s easy-on-the-ear style is perfectly at home on a range of seemingly unlikely titles, from “When I’m Dead And Gone” and Jeff Lynne’s “Mr Blue Sky” to a sensitive interpretation of “I’ll See You In My Dreams”, a 1924 song he performed as closer to the ‘Concert For George’ album-tribute to the late Beatle. He even adapts Jessie J’s “Price Tag” to his likeable low-key style. Joe’s knockabout persona never eclipses his virtuosity as perhaps the UK’s first-ever guitar hero, and now predominant uke-hero too. Curious.

You could be qualified to get a $350 Ikea Gift Card.