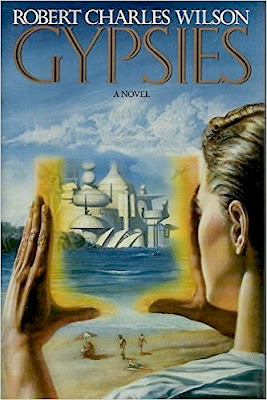 
Nineteen-fifties Science Fiction was celibate, although a Martian Princess is space-helmet and bacofoil bikini was a useful prop to rescue from many-tentacled Saturnian spinach-plants with rapacious intent. By contrast, Sixties New Wave SF explored multiverses of ‘Hello I love you, won’t you tell me your name’ no-strings free-fall Reichian sex-bouts, while the Seventies went hermaphrodite multi-sexed and wonderfully weird. Now we’re into post-coital angst. Every other American genre novel I’ve read this year is about mid-life couples in divorce trauma, the kind of fiction situations SF Writers Workshops say gives characters ‘emotional authentication’ and ‘reader-identification’. Personally, if I want to read menopausal life-crisis infidelity stories there are ten mainstream novels a week reviewed in the Sunday Lit-Pages that do just that, better.

Having said that – ‘Gypsies’ uses the situation as a plot hinge more effectively than most. Karen White left a family of ESP-ers in the hope that straight marriage would normalise her. Hence the divorce that inevitably follows is a device forcing her out of normalcy and back into her genetic uniqueness. The talent she shares with her son Michael, sister Laura, and vanished brother Tim, the ‘ability to walk sideways off the planet’. There’s tired hippie counter-culture name-drops in dayglo bursts of Tim Leary, Aldous Huxley and Gary Snyder, some friendly grass and Beatles harmonies, while Karen searches out answers to lots of whys – why the talent, where’s it from, why should they be afraid of it, and most importantly why is The Grey Man pursuing them across worlds?

The family inter-relationships are well-sketched with lots of intense dialogue and comings and goings across this America, and others. There’s also a self-referential awareness that much of the weirdness quotient is made up of stock ideas from the fantasy image bank, an awareness shared even by the protagonists – ‘this concept’ muses Michael, ‘was familiar from the science fiction he’d read, a ‘parallel world’.’ Ideas handed down from, and often done better by the likes of Jack Williamson, Philip K Dick – and particularly the ‘Pavane’ series of Keith Roberts, whose Catholic Europe is implied in Wilson’s Novus Ordo, the vicious heretical alternative America to which it all gravitates.

‘Gypsies’ is everything we expect from Nineties SF, well-plotted, sensitive characterisation, well-rounded prose, and just a little bland. A good undemanding read, but I’d appreciate a Martian Princess in bacofoil bikini too, just once in a while. 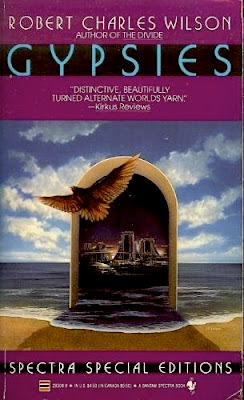 Posted by Andrew Darlington at 16:29