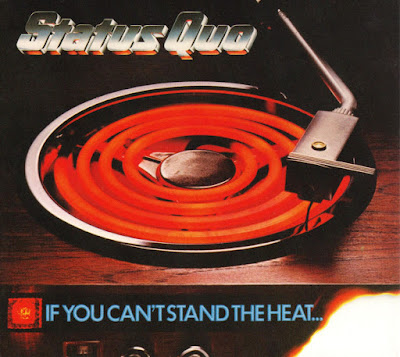 
Yes. As Soap Opera’s go, Francis & Rick are in a strange no-place. As other bands of a vaguely similar longevity – Kinks and Who, only increase their retro-value, name-dropped by everyone from Kaiser Chiefs to Thrills, the Quo get to guest on ‘Coronation Street’ as Les Battersby’s pet-band. Quo’s legacy is apparently limited to Oasis’ much-maligned “Roll With It”, or to a psychedelic TV-ad for Gordon’s Gin, to such an extent that it’s difficult to know who this ambitious lavishly-packaged re-issue programme (with bonus tracks and demos) is targeting. Yet Mark Radcliffe describes them as ‘design classics’ and these are Quo’s peak-years albums, spanning ‘Live Aid’ and their celebrity pinnacle, spawning hit after hit, not all of them conforming to that familiar three-chord stereotype – such as the slow lilting “Rock ‘n’ Roll” (on ‘Never Too Late’) or the stoned glide of “Living On An Island” (on ‘Whatever You Want’, the strongest of these albums). And true enough, their essential instinct lies in a solid respect for those early radio-days when Rock ‘n’ Roll was ‘delivering us from the days of old’, when ‘you couldn’t find a rhyme ‘cos you couldn’t find the time’ (“Again And Again”). And from there, evolving their sound by layering Everly Brothers harmonies over Chuck Berry-derived R&B for a Lumpen Rockariat fan-base. And, after all, before it got high-jacked by intellectualisation, isn’t that what Rock was all about? Repetitive? Of course it’s repetitive. But when they do that relentless heads-down no-nonsense boogie-thing it’s impossible not to grin yourself stupid. Admit it. 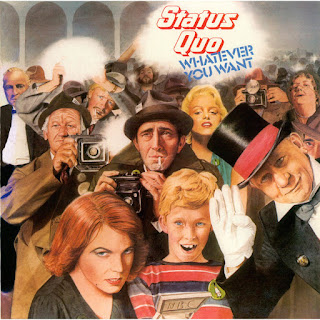 Posted by Andrew Darlington at 19:21