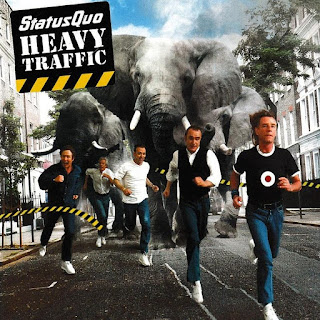 A new Quo album is the least envied assignment in Music Journalism. And sure enough, the album’s first four opening bars tell the entire tale. To venture further is only to reveal this unique brand of all-British Rock stripped down to its minimalist thong. But it’s engagingly unpretentious. Sure, Quo know their limitations. But they work damn well within them. So what did you expect – a Hip Hop album? A Free Jazz experiment? There are fourteen original tracks, with a strong – if unpretentiously autobiographical feel to them. ‘I started gigging in my early teens,/ sewed the great leather patches on my velvet jeans,/ got my first Fender Telly/ got my Marshall stack’ is probably pretty much as it happened (“Blues & Rhythm”). “All Stand Up” is a straight-ahead audience-participation rocker with a catchy hook chorus. The single “Jam Side Down” fades into some close Everly-style harmonies about failed love with some tortured metaphors about ‘I’ve got a butter heart/ you made it melt’. A rhyming jokiness taken to possibly racially offensive extremes (if you could only bring yourself to take it seriously), on “The Oriental” introducing ‘Mea from North Korea’ a ‘raver of eastern flavour’, and ‘May Wong from Hong Kong’ who ‘if you ever get some, you want another one, and another one’. Ho-Hum! Elsewhere they slyly rewrite John Lee Hooker’s “Dimples” into a blues-sleazy “Creepin’ Up On You”, include a harmonica-driven “Solid Gold” and an acoustic riffing rural-themed “Green”. Yet the Rock-life is what this album is really about – ‘if it hits you right/ just do it again’, which is pretty much what they’ve been doing for three decades. And yes, their three chord changes still chime as meticulously as synchronised gear-shifts. If this album did not exist the effect of its absence would be well below zero. It won’t change lives. It alters or advances nothing. It’s a further episode of what went before in an enduring Rock ‘n’ Roll Soap Opera. The Quo are not for now or then. The Quo are for life.
Posted by Andrew Darlington at 19:31