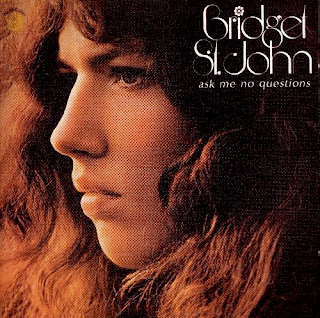 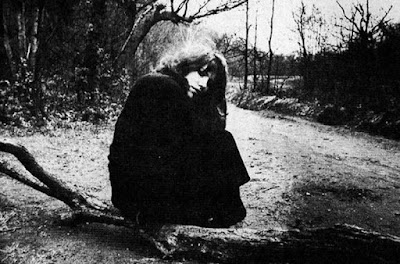 The conundrum involved with getting signed to John Peel’s own label was that – due to the BBC’s conflict of interest policy, Peel couldn’t actually play the records on-air on his show. So Bridget gigged on his road shows, and did a live 1969 ‘Top Gear’ session, its four tracks preserved on CD4 of this valuable box-set. Bridget resembles Françoise Hardy by way of Donovan, Nico via Nick Drake, a softly-bruised simplicity that trips barefoot on hot pavements, tastes buttercup sandwiches and hitchhikes with a boy with lizard-long tongue. All set with notes of crystal purity in a spangled bohemia where the alchemy of curlews, mistle-thrush and church-chimes ornate the melancholy 7:49-minute title song of ‘Ask Me No Questions’ (1969), underscored by John Martyn’s guitar and Dominic’s pitter-patter bongos. Then ‘Songs For The Gentle Man’ (1971) produced by Ron Geesin, is breathy pastoral chamber baroque-Folk with airy woodwind and Donovan’s exquisite “Pebble And The Man”. And ‘Thank You For…’ (1972) produced by Peel, choosing highlights is hard, but “Lazarus” is one. Three studio albums that pretty-much contain this vital phase of her career, bulked out with bonus live material and previously unreleased tracks, predominantly her own songs with a few Cohen, Dylan, Joni and Kevin Ayers thrown in. There were subsequent albums, a Greenwich Village sojourn and contributions to Mike Oldfield’s ‘Ommadawn’ epic, but everything you really need to know about Bridget St John is here, in this beautiful box.