Cult Albums: Two by THE FALL 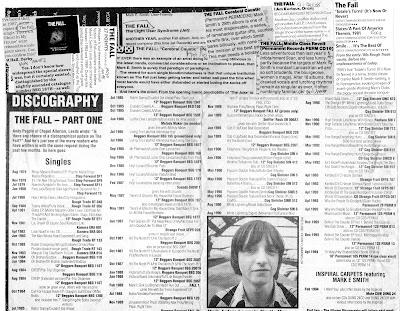 HOW BEAUTIFUL IT
WAS TOMORROW:
THE FALL’S SAVING GRACE

What is this thing called Fall?

Is it Fall: as in the verb – to fall (did he FALL or was he pushed? I’m not FALLing for this crock of crapola no more! FALLing in and out of love).

Or is it Fall: as in the noun – The FALL. FALL from grace, vis theology.

Does it even matter? Mark E Smith’s a word-scrambler of some eight years standing (and FALLing). That irresistible rise and rise of Fall has taken him into a niche midway between upwardly mobile and horizontally frozen. This album, their tenth – and first for Beggars Banquet, will give both Fallophiles and Fallophobes pretty much what they’ve come to expect; some further conjugations of the verb ‘to Fall’ (in which everything’s delivered and nothing much is revealed). Same as it ever was… same as it ever was…

The inner sleeve collage shows Mr E Smith situated beneath posters for Billy Cobham, Bo Diddley, and The Trio. Are we to draw conclusions from these references? Chances are they’re scat-random, much like the use, miss-use and abuse of language within. ‘What have you got in that paper bag?/ is it a dose of vitamin C-ee?’ now is that heavy or is that HEAVY?!? The collage also cannibalises press-cuttings (‘punk is strung somewhere between the Fall and the Doors’), and a Music-Biz small-ad for a kit to change your unwanted vinyl albums into Picture Disc Wall Clocks (for a mere £3.95). Is this (a) commercial sponsorship, (b) a significant statement… about ‘Hex Enduction Hour’ perhaps?, or (c) an instruction on the recommended use for THIS album?

Vinyl-wise the album fades in and fades out with an identical motif – the first one (“Mansion”) at 01:21, both brief and instrumental, the final one (“To NK Roachment: Yarbles”) the same but with some tacky lyrics tacked on – ‘ev’ry day I have to cry some/ wipe the tears from my eye some’, didn’t Dusty Springfield sing that? Side one continues through “Bombast” with its ‘feel the wrath of my bombast’ vocals lost inside John Leckie’s labyrinthine mix, audible fragments drifting free like the bubble-patterns working their way through the surface of your own backlit aquarium; and “Barmy”, a huge cavernous dense dissonant echoing slithering interlocking imbroglio of noise threaded onto an irritating riff litigation-close to “Satisfaction”. Then there’s a rowdy rabble of vocalese leaden down with brain-dead bass (from Dublin-born Stephen Hanley) listing all the things “What You Want” – Watneys, a censor who cuts out pals like these, etc. And “Spoilt Victorian Child”, a twangy laser-knife Brix guitar cutting around a classic non-constructed song-structure in jerky zigzags of repetition just this side of cacophony – an exercise in the fine art of (almost) FALLing apart that Fall specialise in.

Side two’s a whole lot more interesting – “My New House” will probably become this album’s stand-out – its saving grace, it matches an acoustic intro and a near-Rockabilly slap-kick backtrack to Mark’s expressionless voice-over; but the one I keep jacking the stylus back to is the intriguing “Paintwork”, intercut with odd meanderings of tape and megaphone-distortion voice declaiming a stream-of-conscious narrative of notebook jottings. An acid-rain of drums (from ex-PiL and ex-Nuclear Angel Karl Burns) and “I Am Damo Suzuki”, a skewed reference to Can, maintains the interest quotient while remaining infuriatingly unmistakeably Fall.

‘All the groups who hit it big/ make the Kane Gang look like an Einstein chip’ sneers Mr Hip Priest (on “Gut Of the Quantifier”), a neat couplet, and an even neater encapsulation of the inverted snobbery of the Indie aesthetic that snares him. Does it matter? What is this thing called Fall? Is this man deep or is this man DEEP?!? 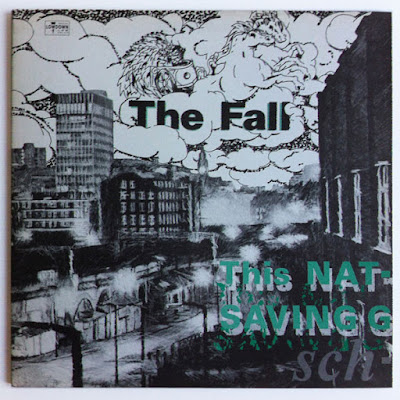 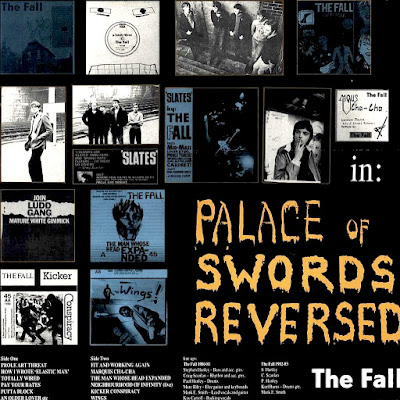 Fall’s latest vinyl evidence up for analysis is an odd and eccentric compilation of obscurities and curios trawled mid-period from their ten years of recording. It could be said that ANY Fall album is – by definition, odd and eccentric. But this one fields clues simply by its being a personal assemblage served up as launch issue by Mark E Smith’s own label. ‘Cog Sinister’ is presumably a twist on the previous album title ‘Bend Sinister’ (September 1986), a tag lifted from a Nabokov tale, which therefore might betray some kind of literary bent. Contents-wise things get a little less exact – “How I Wrote Elastic Man” and both sides of “Totally Wired” c/w “Putta Block” go back to 1980 and the debut singles from the Rough Trade phase. Then there’s “The Man Whose Head Expanded” and both sides of the “Kicker Conspiracy” c/w “Wings” single. Plus “An Older Lover”, “Fit And Working Again” and “Prole Art Threat” salvaged from the now-rare ‘Slates’ ten-inch EP a year later. Followed by Mark’s Falklands babble-logue “Marquis Cha-Cha” which should have formed instalment three of a 1983 singles-triad before Fall flitted from Rough Trade to Beggars Banquet – if it wasn’t for the fact that this third title was pressed up and advertised but never officially released (until the Kamera-label ‘Room To Live’ mini-album track).

There’s more… all core-samples drilled from Fall’s most fertile formative time-zone, when their initially directionless gut-liquefying sonic dementia was being sculpted into the most distinctively idiosyncratic noise in Indie-Pop. You know it by now, they all operate on the same long-established Fall principle that forbids any construction of sounds that are too obviously well-finished, surly non-audible rants delivered with the air of practiced boredom all wrapped up in a neurological devastation of riffs at head-kicking eye-thumping power. It still sounds smashed, blocked, and as exhilaratingly stunning as it ever did. And whatever it is they did – and are still doing, they did – and are still doing, pretty damn right. Theirs is a practiced and professional shambles, and if this retrospect, this Greatest Non-Hits doesn’t exactly unpervert the language or uncover the Fall-guise, then it does dig around the Prole-Art Threat some, and that makes it worth the price of admission hereabouts. 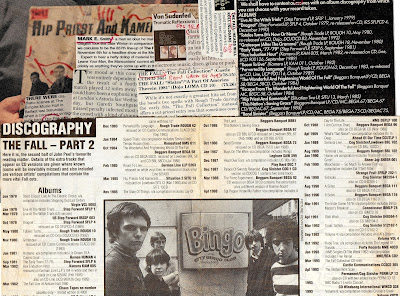 Posted by Andrew Darlington at 18:16

Want To Boost Your ClickBank Banner Commissions And Traffic?