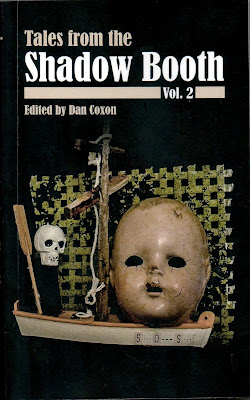 
The iconic ‘Pan Book Of Horror’ paperback series launched modestly in 1959 curated by Herbert Van Thal, it offered a fiendish cauldron of classic tales stirred in with tyro untried writers. Accused of down-market bad taste and vilified as garishly nasty, it nevertheless nurtured and fed the gory thrill-hungry appetites of a misfit generation. It survived for thirty editions, before finally winding down in 1989. Yet it’s legacy lingers on like a noxious aroma, suggesting further possibilities of otherness.

Until now – as Dan Coxon explains, there’s ‘The Shadow Booth’, ‘a bi-annual journal of weird and eerie fiction I’m editing, published as a mass market paperback with a nod to the old ‘Pan Books Of Horror’.’ The concept of this beautifully-produced pocketbook is that the ‘Shadow Booth’ itself offers an outré portal into a Twilight Zone located just around the dogleg of your subconscious, a step off the path into a parallel realm of weirdness. ‘Enter the Shadow Booth, and you will never be the same again.’ The first volume included fiction by Paul Tremblay, Malcolm Devlin, Sarah Read, Timothy Jarvis and others. And already its momentum accelerates…! 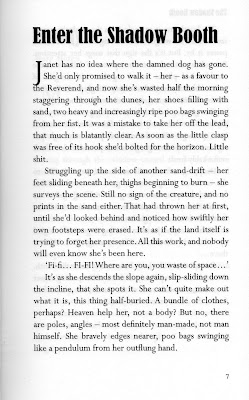 The voyage into unfamiliar strangeness is one of the earliest human story-telling devices, all the way back to Homer. Gareth E Rees innovatively utilizes climate-change oddness to infiltrate renewed dimensions of the unknown in “We Are The Disease”, as his Research Vessel ‘Salvo’ investigates mutant spores and microbial biochanges released by the melting icecap of ‘a planet in awful transformation.’ And elsewhere, subaquatics form a meme that deep-ripples through other tales. ‘The water wants to drown us’ protests George Sandison in “Keel”, ‘it’s all it knows.’ Caught in the lure of past times, haunting yesterdays that submerge beneath the former festival site lakeside. While the mismatched duo in Dan Grace’s “Waves” are also camping, on Jura this time, to encounter a creature that’s not quite a bird. ‘Life and art feed off each other’ in postmodern awareness, ‘we’re copying the movies, but then they’re copying us copying them,’ into a place where memory becomes ‘the Tardis of my skull.’ Then Chikodili Emelumadu details the problems and etiquette of interspecies relationships with aquatic life-forms.

Already the mainstream contemporary edge and character depth goes places those dusty old Pan writers never suspected. Into the unsettling trauma of never-born children, the Halloween anniversary of a stillborn son, from Mark Morris in “Buddy”, as children slip by like a shoal of fish, and assume the Mer-horror costume-guise of ‘sharp teeth and mean faces and hair like octopus legs.’ Or the terrible memories of an absent father blurred by merciful amnesia, in Giovanna Repetto’s “My Father’s Face”, translated by Amanda Blee. There’s also a surreal continuum about Kirsty Logan’s “Good Good Good, Nice Nice Nice”, a step sideways from anything as unsubtle as visceral shock, where post-war mutant shark-children are hatched from net-cage pods, with all the tenderness of a maternal lullaby. And the deceptive normality of Aliya Whiteley’s “Ear To Ear” about the butcher’s daughter persuaded to wear floral hats in order to disguise the hole that runs through her head, temple to temple. Then the elegant poised prose of two slipstream tales from Anna Vaught, a haunted old house in the sleepy French village that is ‘a living breathing organism’ thronged with a company of ghosts (“Feasting; Fasting”), and the mesmerizing sorcery of the strange cold street in the beguiling “Cave Venus Et Stellas”.

Ralph Robert Moore’s “Monkeys On The Beach” documents the most disaster-prone of Caribbean family-bonding holidays, while Johnny Mains’ stunning “The Joanne” returns to the voyage into unfamiliar strangeness theme beneath a double-sun, nudging Samuel Taylor Coleridge through a space-time anomaly, combining elements of the surreal with epic nautical adventure and downright eldritch ‘Weird Tales’ fantasia. Interestingly enough, there’s another continuity loop at work here, for Johnny wrote an introduction to a ‘Pan Book Of Horror’ relaunch edition published in 2010. But on this evidence, let’s just ensure that ‘The Shadow Booth’ continues as long as its illustrious predecessor. 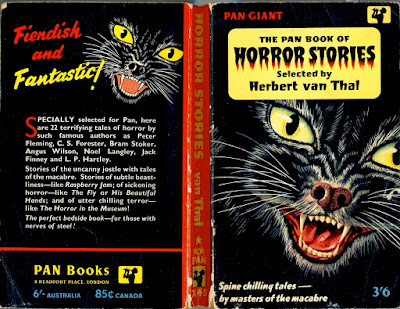 Posted by Andrew Darlington at 20:47

Invest in Ripple on eToro the World's #1 Social Trading Network!!!

Join 1,000,000's who have already discovered better strategies for investing in Ripple.

Learn from established eToro traders or copy their positions automatically.