Poem: 'Where Do All The Dead Birds Go?' 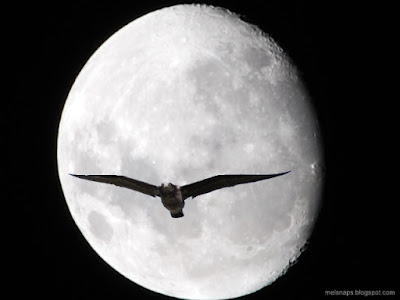 WHERE DO ALL
THE DEAD BIRDS GO?


when I was nine I ask my Mother
where do birds go when they die?
the clock ticks on the mantelshelf,
the fire cracks and spits in the grate,
she turns the page of her magazine
as though she hasn’t heard my voice,
a bug’s life, to a bug, she says at length,
is as long as a human life to a human,
or a bird’s life to a bird, yet when they
near the end they get the calling deep
in their feathery hearts, gulls fly north
beyond arctic glaciers and icebergs
where they freeze to snow-crystals
and fall in white shrouds until spring
melts them, terning them into new gulls,
pigeons build nests in the clouds where
they scrat and strut, disturbing rain droplets
into morning drizzle that falls on our faces,
ravens fly to the dark side of the moon
which is a cosmic bird-house, sparrows and
wrens wriggle through small crater-holes
onto perches in the moon’s hollow interior,
with thrushes, swallows, tom-tits and swifts
beneath the roosts of owls, herons and kestrels,
as the lunar phases wane, until the crescent and
its aviary of souls are reborn New Moon anew,
canaries and yellowhammers stream molten
into the sun to return in golden rays of summer,
then, if you look up at midnight
every star you see in the sky
is a starling ghost, each fiery streak
of a falling star marks their return
to the trees of their favourite forest,
I’m not sure I believe everything
my Mother told me, but now, when
the clock ticks on my mantelshelf
and I get the calling myself
I wish I’d thought to ask her
where do lost boys go when they die?

Posted by Andrew Darlington at 23:16