Poem: 'DANCE-BAND AT THE EDGE OF INFINITY' 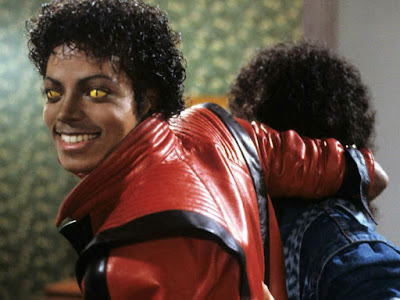 DANCE-BAND AT
THE EDGE OF INFINITY

I recall how Michael used to come around
and say ‘Andy, show me some dance moves’
and I throw stylish shapes that I later see
him use when the video debuts on MTV,
how just once, when I idly scratch my balls
he goes ‘yeah man, that’s so fine-superfine’
in that sweet melodic falsetto of his,
and despite my protestations he’s there
crotch-grabbing on that next hit vid of his,
sometimes I miss that little Jackson guy…
and I remember how this scruffy little Folkie
comes pestering ‘Andy, help me write hits’
but I’m busy sequencing Little Mix tracks
and he’s such an obvious no-hoper
I tell him to sod off, I still feel a tad guilty,
about whatever happened to that Ed Sheeran…
Posted by Andrew Darlington at 15:19