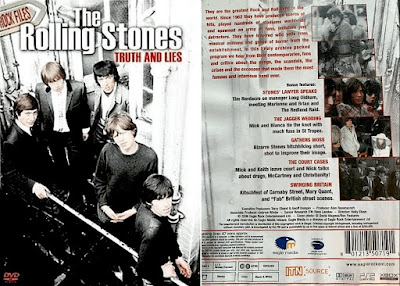 Can the Rolling Stones’ story be conveyed through image as much as music? Surely those who pay to see the antique relic’s ‘Bigger Bang’ tour only do so to glimpse ghosts of former glory? Whatever music is involved – perfunctory tribute-band umpteenth-regurgitations of “Satisfaction”, must be incidental rather than central to the experience. Andrew Loog Oldham’s vital contribution to the scam was to seize on the group’s surly visual power from the beginning, and to mould it into a durable rough-trade contra-Beatles brand, a highly-marketable identity refined and ultimately pared down into the ubiquitous protruding-tongue logo. But is that enough? This DVD, a smaller and more modest ‘bang’, succeeds in relating the full arc of ‘Their Satanic Majesties’ career devoid of a single note of original music. You want the hits and clips? go to the excellent 130-minute ‘25x5: The Continuing Adventures Of The Rolling Stones’ (originally CMV Ents, 1989) which has them all.
By contrast, this is purely voice-over, enhanced by an assemblage of public-domain newsreel items and film of theatrefulls of screamage teens – and it was theatres then, not stadiums. Study the swaggering insolence without the distraction of block-chord riffs. Or hear Jagger’s educated articulate sneer out of the context of lyrics. This – after all, as much as the Gered Mankowitz portfolio of feral tour photo-studies, conjures the inflammatory alchemy the Stones contrived during their ascent, an iconography of images plundered and replicated by generations of bands since. Of course, it couldn’t possibly last. But it did. While the Beatles always had the edge when it came to cutesy girlie fan-mags, it was the Stones more confrontationally rebellious stance which became the default setting for US garage-Punk bands from the Chocolate Watch Band on. With Brian’s damaged stoned smile as an integral asset. Wherever the sixties were not Fab, they were Rolling Stoned. Then the New York Dolls were one Mick Jagger backed up by three Keith Richards. Aerosmith’s Steve Tyler sought to out-pout Jagger. The Stone Roses Ian Brown took and remodelled the pout, while Primal Scream attempted a total artful replication. 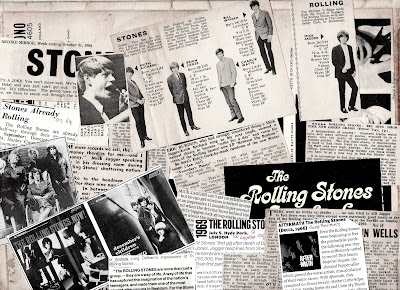 This DVD re-tells the familiar tale efficiently. Mick and Keith meeting on the platform of Dartford Rail station in October 1961. Brian Jones’ forming his Blues Band, and the group living ‘in squalor’ on Jagger’s student grant at Edith Grove SW10. Oldham moving Ian Stewart back-stage because his image was wrong. John and Paul gifting them “I Wanna Be Your Man”. Brian becoming marginalised within his own band as Mick & Keith’s writing partnership develops. The hits. The pissing against the garage wall. Now we shrug – yeah, Rock ‘n’ Roll life-style. But it wasn’t like that then. We forget how fast things were changing. As a positive example to the ‘kids’, Elvis never publicly drank or smoked. Cliff neither. The Beatles indulged in their ‘ciggies’. But the ‘b’-side of the Stones second single was titled “Stoned” – pretty risqué even considered as a pun on the group’s name. They followed it with teasing references to “Mother’s Little Helpers”. So when the ‘Redlands’ bust and Jagger-in-handcuffs photos hit the tabloids it was far more than just another tedious Peter Doherty escapade, it was seismically breaking new ground for Pop-culture. Seeing this newsreel stuff now captures something of that moral panic. 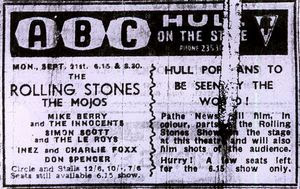 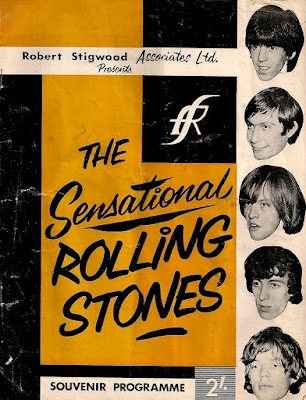 A ‘Pathe News’ cine-sequence illustrating their appearance at the Hull ABC cinema on a bill with the Mojos, and Ike & Tina Turner, a visit to my home city which I remember well. Another, ‘The Stones Roll In’, documenting the ‘frantic and disorderly’ arrival of the ‘shaggy-haired’ reprobates at Sydney airport for their 1965 Australian tour. There are no original to-camera Stones to narrate the tale as talking heads, but journalist Chris Welch was there at the time, writing for ‘Melody Maker’ through the Swinging London hits, and he adds knowing – if scarcely revelatory comments. Paul Gambaccini fills in during that amazing run of albums that go from ‘Beggar’s Banquet’ (December 1968) to ‘Exile On Main Street’ (May 1972) when the band were literally the finest most dangerous thing around. 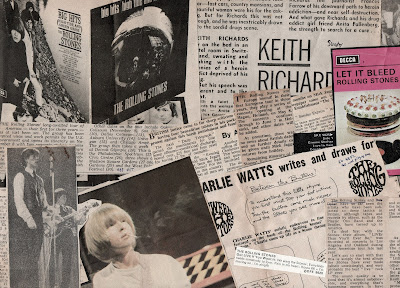 If Redlands was the establishment’s revenge, and Altamont was the counter-culture’s Faustian reckoning, both were feeding as much on the Stone’s image-threat as on their music. Grace Slick – who was there, told me Jagger was wearing a devil’s costume at Altamont. He wasn’t. But in the intensity of the event, that’s the way she saw it. That’s how powerful the demonic vibe was. There’s also spoken-word contributions from a youthful-looking David Hepworth of ‘The Word’ who talks about growing up the fifties, but surely must only have been there for the Ronnie Wood tax-exile career-low through to the brief resurgence of ‘Some Girls’ (June 1978), and even ‘Voodoo Lounge’ in 1994 . But if we don’t get to hear any of the music, it runs as a subliminal soundtrack in your brain, surely even those born twenty years after the hits know them all anyway. 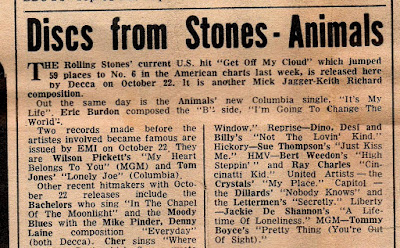 Among the generous selection of bonus cine-featurettes is a dayglo-colour ‘Pathe Pictorial’ exploration of those lost Swinging London days done in the manner of an Attenborough ‘Strange Planet’ wildlife doc. Explaining the phenomenon of ‘swinging youth’ – ‘this strange and disturbing generation’, these weird new creatures, mutant and exotic with their radiant garb and incomprehensible language. It’s essentially a shameless promo-piece for a magazine-launch ‘written by the kids for the kids’ with sequences regularly plundered ever since for every TV sixties retro-flashback you’ve ever seen – Carnaby Street trendies and proto-Flower Power poseurs, and it’s amusing to have the opportunity of viewing the full short movie, although I don’t remember actually noticing the magazine itself in the local newsagents. ‘Rave’? – yes, that was everywhere, but ‘Intro’? – sorry, no.
www.liberationentertainment.co.uk
Published (abbreviated form) in:
‘ROCK ‘N’ REEL Vol.2 No.12’
(UK – November 2008) 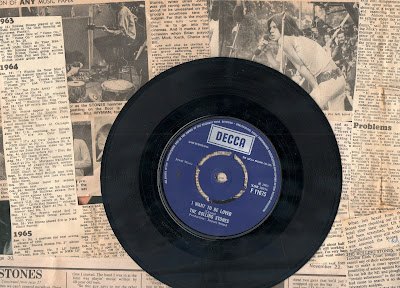 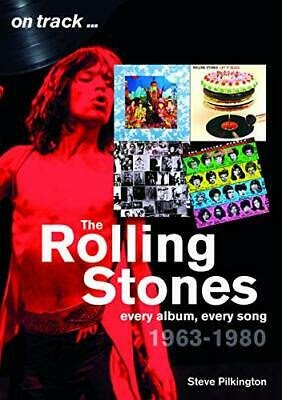 I bought the Stones debut single – “C’Mon”, when it was gathered onto the September 1963 ‘Thank Your Lucky Stars Vol.2’ spin-off compilation from the TV Pop-show, alongside tracks by Jet Harris & Tony Meehan, Karl Denver and the Marauders. It was the first time they appeared in twelve-inch format, and I played it to death. Steve Pilkington is dismissive of their “The Rolling Stones” EP, although it reached no.15 on the NME singles chart (22 February 1964) with a moody beach film-clip, providing early indication that the fivesome were more than just another Beat-Boom fad. But he’s good at teasing out track-by-track details of their early US albums, rejigged and padded out by the London label to include B-sides, EP tracks and some rarities including “Blue Turns To Grey” on ‘December’s Children (And Everybody’s)’ (December 1965) which provided an unlikely hit single for Cliff Richard, struggling to retain some kind of relevance in the tsunami of the new weird. The Stones first US hits – “Time Is On My Side” and “Heart Of Stone” weren’t even singles here. The value of this book, and others in the SonicBond series, is that it concentrates purely on the recorded vinyl evidence, with none of the distracting gossip-stuff, and effectively tells the story via fax ‘n’ info through to ‘Emotional Rescue’ (June 1980) with all the gritty studio detail you could reasonably expect to get.
Published in:
‘R’N’R’ Vol.2 Issue 78’
(November/ December 2019) Posted by Andrew Darlington at 11:58

I'm here to let everyone know that there is a cure for HERPES1&2. The doctors have succeeded in letting people living with Herpes know that there is no cure for Herpes and they have been enslaved to the antiviral and other supplementary Orthodox medicine just to help suppress the virus and not a cure. I got diagnose of herpes1 January this year 2021 and i did not believe in my doctor that no cure for herpes rather i went into research online and I was introduce to Dr Osato a herbal healer by a blogger who also narrated Her story online on how she was cured of Herpes after using Dr Osato Herbal Medicine. I got the herbal medicine from Dr Osato and made use of it as I was instructed. I went to the clinic for a checkup after two weeks of using the herbal product. My result came out Negative and I was booked another appointment after 30days to confirm my result and the test still showed Negative and I was given the green light that I am fully free from herpes. All thanks to God for using this Great herbalist to heal me. You can contact Dr Osato by email: osatoherbalcure@gmail.com or WhatsApp +2347051705853. His website is osatoherbalcure.wordpress.com. I have promised to keep sharing my testimony so people will know that there is a cure for herpes.