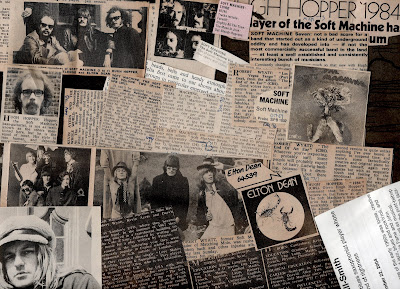 BEYOND THE SOFT MACHINE

Album review of:
‘LIVE AT THE PROMS: 1970’
by SOFT MACHINE
(August 1988, Reckless Records RECK 5)
Fan-Bloody-Tastic!
In-Bloody-Credible!
With the Sixties slopping messily over into the Seventies, the serious music buzz-words are ‘improvisation’ and ‘progression’. But if any one group can provide justification for those pretentions it’s the Softs. Starting out as sub-Floydian psycho-Poppers with a sales-friendly single “Love Makes Sweet Music”, and two in-house Syd Barrett-wacko clones in the figures of Kevin Ayers and Daevid Allen – within the three years it takes them to reach this Albert Hall ‘Henry Wood’s Proms’ one-off they’ve mutated out of all recognition. Even now, with this concert finally side-stepping onto vinyl after eighteen years of Radio Three legend and cult memory it still comes at you as unexpectedly as the soundtrack to a surrealist movie. By then composed and deconstructed into Hugh Hopper (bass), Mike Ratledge (keyboards), Elton Dean (sax), and Robert Wyatt – on his penultimate album as Softs drummer, they run through scripts from their albums ‘Third’ (1970) with Hopper’s “Facelift” and Ratledge’s “Out-Bloody-Rageous”, and ‘Volume Two’ (1969) – with just a taster for what was to come on the ‘Triple Echo’ (1977) compilation and ‘Fifth’ (1972) drawn into the five segments making up side two’s long “Esther’s Nosejob” which moves from 7/8 time into outer space through an asteroid-storm of electronics and Wyatt’s eerily resonant scat interjections. 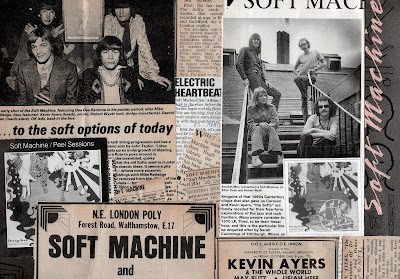 Yet from the opening dissonant moans of Ratledge ‘kick-starting’ his organ this is very much a human music produced by people making it up as they go along. Compact exploratory solos are housed in angular time-signatures, complex interplays lurk inside partially structured structures that defy classification. There’s a scampering of Hot Rats here, a judicious stirring of the Bitch’s Brew there, all orbiting a Nucleus of Elastic Rock, but the Softs were – and would stay, so well into their own continuum that comparisons become a nonsense. This release formed Soft Machine’s first-ever CD, and it’s made up of music spontaneously assembled, free music played before such concepts were digitalised out of existence.
Su-Bloody-Perb!
A-Bloody-Mazing! 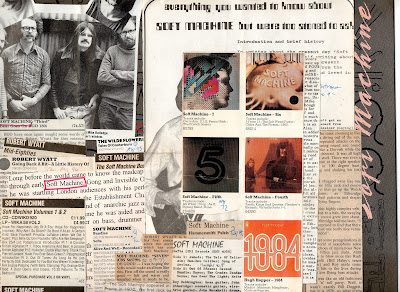 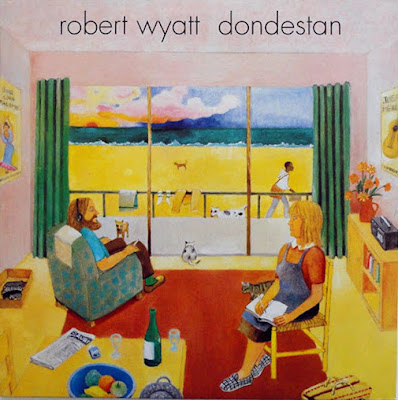 Album review of:
‘DONDESTAN’
by ROBERT WYATT
(1991, Rough Trade R274)
At the time of this album’s original release there was a joke going around, ‘what’s the difference between Russia and Britain?’ – in Britain you can still belong to the Communist Party! As indeed did Robert Wyatt at the time. In the political credibility ‘are you or have you ever been’ stakes, Wyatt is a shoo-in. Physically he cuts an impressive figure; as shock-bearded as a pre-revolutionary anarchist bomber, as grizzled as some Tolstoyan guru jammed to the not-inconsiderable seams with opinions, righteous rage and esoteric wisdoms. But Wyatt – the ex-Soft Machine drummer, is an artist whose ideologically Left right-on-isms you respect, rather than whose music you enjoy. His finest post-Softs moment thus far was Elvis Costello’s “Shipbuilding”, a song about the Malvinas Argy-Bargy, incidents now as irrelevant and as time-lost as Suez.
And ‘Dondestan’ – following six years of vinyl silence, is just as odd as his history would lead you to expect. Largely co-written from his wife-partner Alfreda Benge’s lyrics, recorded and multi-tracked as a solo musical project – apart from fellow Soft Machine Hugh Hopper’s contribution to “Lisp Service”, it’s a dense and uneasy work that goes by turns from monotone repetition to unexpectedly striking within the space of a single track. The five sets of lyrics crafted by ‘Alfie’ – originally penned as poems during an off-season Spanish sojourn, have a reflective depth of imagery that decisively rejects agit-prop in favour of a more ambiguous sensitivity. They read with the narrative detail and subtlety of poems, they humanise the album invaluably, Wyatt’s melancholic and frequently tuneless elaborations delivered over haunting washes of layered synths, investing them with an attractively hard cutting edge. 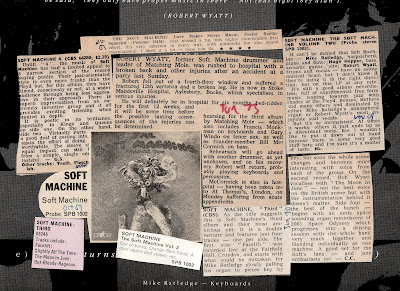 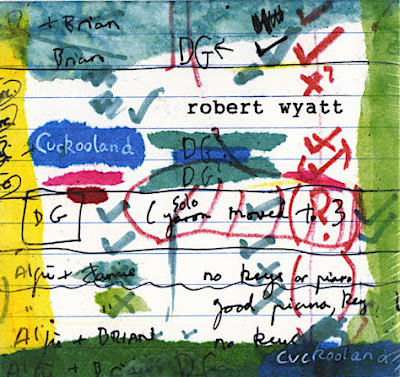 Album review of:
‘CUCKOOLAND’
by ROBERT WYATT
(October 2003, Hannibal Ryko HNCD1468)
To recap. Soft Machine, after misfiring with the sweetly psychedelic-Pop “Love Makes Sweet Music”, became just about the most invigorating jazz-fusion band of that strange lost time-coded period. Not through supernaturally flawless un-human Weather Report virtuosity. But by adding a more robust raw-edge to their angular spontaneity and technical incandescence. Then drummer Wyatt falls out of a window at a party, and loses his mobility. And his voice, on subsequent recordings is a stranger more uneasy instrument. Some say haunting, dreamy, others languorous, meandering.
All this preamble is relevant, because – with ‘Cuckooland’, his first album in six years, Wyatt sets his pained vocals into a free-music context led by Annie Whitehead’s sinuous trombone and Yaron Stavi’s resonant walking double-bass, Karen Mantler’s subtly looped vocal samples and her three compositions, plus drop-in visits from a tastefully restrained Paul Weller, Dave Gilmour, Phil Manzanera, and Brian Eno. Sixteen new tracks neatly divided, vinyl twelve-inch style by a thirty-second ‘suitable place for those with tired ears to pause and resume listening later’. A useful consideration. To recap. “Shipbuilding” was a fine Falklands-relevant equation, with Elvis Costello’s perceptive lyric balancing the evil of foreign war with the benefits it brings to a more regional working class. Some see it as Wyatt’s finest moment, even though his monotone whine fails to rise to Elvis’ own interpretive power.
Yet here Wyatt is never less than hand-wringingly unreconstructed retro ‘Old Labour’, with a ‘Guardian’ slant on the Iraq invasion (“Lullaby For Hamza”), on Roma asylum-seekers (“Forest”), no-nukes (“Foreign Accents”), and right-on nods to World Music (“La Ahada Yalam” from an Arabic original by Amal Murkus). But there’s more. The melancholy samba of Antonio Carlos Jobim’s “Insensatez”, beatnik-cool references to Juliette Greco falling in love with Miles Davis in Paris – with a bonus Jean-Paul Sartre name-check for additional cultural weight (“Old World”), plus a voiceless piano-take on Buddy Holly’s “Raining In My Heart”. An unwieldy mix to intellectualise on paper, but oddly involving coming at you through upwardly spiralling soprano sax, straining ghost horns and a descending mist of voices. Those smooth electro-slipstreams and carefully-structured cool-jazz cadences envelop and make a nonsense of such apparent contradictions. The End of an Ear? Far from it. Love – even at its most defiantly abstract, left-field and left-wing, still makes sweet music.
Track Listing:
Part One: Neither Here…
1. ‘Just A Bit’ (Robert Wyatt) dedicated to Richard Dawkins 5:09
2. ‘Old Europe’ (Robert Wyatt with Alfreda Benge) 4:15
3. ‘Tom Hay’s Fox’ (Robert Wyatt) 3:33
4. ‘Forest’ (Robert Wyatt with Alfreda Benge) features David Gilmour guitar 7:55
5. ‘Beware’ (Karen Mantler) 5:09
6. ‘Cuckoo Madame’ (Robert Wyatt with Alfreda Benge) 5:20
7. ‘Raining In My Heart’ (Felice & Boudleaux Bryant) 2:42
8. ‘Lullaby For Hamza/ Silence’ (Robert Wyatt with Alfreda Benge) 5:00
Thirty-second pause.
Part Two: …Nor There
9. ‘Trickle Down’ (Robert Wyatt) double bass by Yaron Stavi 6:47
10. ‘Insensatez’ (Vinicius de Moraes with Antônio Carlos Jobim) 4:24
11. ‘Mister E’ (Karen Mantler) 4:20
12. ‘Lullaloop’ (Alfreda Benge) features Paul Weller guitar 2:59
13. ‘Life Is Sheep’ (Karen Mantler) 4:14
14. ‘Foreign Accents’ (Robert Wyatt) 3:48
15. ‘Brian The Fox’ (Robert Wyatt) 5:31
16. ‘La Ahada Yalam (No-One Knows)’ (Nizar Zreik) instrumental 4:16
Published in:
‘SONGBOOK no.1’ (October 2003 – UK)
‘MONOMYTH no.12’ (February 2004 – UK) 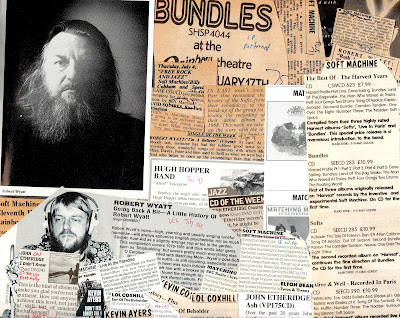 Posted by Andrew Darlington at 14:45

I am so Happy to be writing this article in here, i am here to explore blogs forum about the wonderful and most safe cure for HERPES SIMPLEX VIRUS . I was positive to the deadly Virus called HERPES and i lost hope completely because i was rejected even by my closet friends. i searched online to know and inquire about cure for HERPES and i saw Dr.USELU testimony online on how he was cured so many persons from Herpes Disease so i decided to contact the great herbalist because i know that nature has the power to heal everything. i contacted him to know how he can help me and he told me never to worry that he will help me with the natural herbs from God! after 2 days of contacting him, he told me that the cure has been ready and he sent it to me via FEDEX or DHL and it got to me after 4 days! i used the medicine as he instructed me (MORNING and EVENING) and i was cured! its really like a dream but i’m so happy! that’s the reason i decided to also add more comment of Him so that more people can be saved just like me! and if you need his help,contact his Email:(dr.uelucaregvier@gmil.com) you can contact him on WHTASAPP +2347052898482 He said have the herb to cure difference cure for any sickness  https://druseluherbalhome.simdif.com/
(1) HERPES,
(2) DIABETES,
(3) HIV&AIDS,
(4) URINARY TRACT INFECTION,
(5) HEPATITIS B,
(6) IMPOTENCE,
(7) BARENESS/INFERTILITY
(8) DIARRHEA
(9) ASTHMA… AND MORE