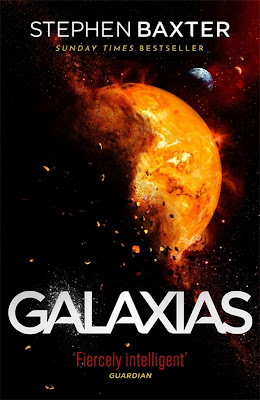 THE DARKNESS OF THE SUN:
STEPHEN BAXTER’S ‘GALAXIAS’
Book Review of:
‘GALAXIAS’
by STEPHEN BAXTER
(Gollancz, 2022, ISBN 978-1-473-22887-0)
www.stephen-baxter.com
Beware: Includes plot-spoilers!
‘WHERE WERE YOU WHEN
THE WORLD WENT DARK?’
This is a self-contained stand-alone novel. But – running to 523-pages, excluding ‘Afterword’ and ‘Credits’, it’s still only a dozen or so pages short of Isaac Asimov’s entire ‘Foundation’ trilogy, which collectively adds up to 548pp. So, still a hefty tome, although a strangely static one. There are jaunts to the Moon, and a character who freezes to death on a return trip from Mars in the Al-miriykh, but there’s also much high-level conferencing, symposia and presentations, dialogue and discussions from which clues are eked, conjectures considered and radical conclusions arrived at. It might have been an advantage to have at least one ordinary protagonist, buffeted and baffled by events, struggling to comprehend the massive changes through rumour and fake news. Instead, the In-Jokes are a Yale clique of academic nerds who map out the protagonist constellation, they talk, they separate, and are drawn inexorably back together again in various configurations. But they are less than action figures.
Stephen Baxter is nothing if he’s not SF-literate. After all, he’s the man who wrote the authorised HG Wells sequels, the head-spinning ‘The Time Ships’ (1995) and ‘The Massacre Of Mankind’ (2017). But the obvious nudge here is Arthur C Clarke, with an alien ‘Lurker’ assemblage located on the Moon’s Sinus Medii – a region that ‘Jules Verne’s lunar travellers saw,’ which fires off a signal projectile in the direction of the newly-revealed worlds of Ophiuchus, Barnard’s Star which is six light years away. And the American Pioneer 10 probe which – as the first human-made artefact to leave the solar system, in doing so, alerts a galactic consciousness to not only human presence, but our expansive potential. Baxter collaborated with Clarke on the ‘A Time Odyssey’ trilogy.
This novel opens in 2057, which is a century since Sputnik 1 became Earth’s first artificial satellite. And a century since Elvis Presley appeared on the Ed Sullivan Show, actually it was 9 September 1956, although the New Diaspora 1957-themed summer party in secessionist California obviously ain’t counting! The world Baxter imagines has endured climate change trauma, and emerged in some ways stronger, in other ways more fragmented. Britain is fractured into independent states, with the English Federal government relocated north to Gateshead. After the DC floods the rump of the dis-United States of America is governed from the Alaskan Winter White House in New Anchorage. Melting ice-caps and the ‘Greenland Melt’ have resulted in flooding land-loss, and the erection of huge barriers to contain and channel floodwater. There were ‘massive technological fixes’ including carbon-munching trees in every public place, ‘but, you know what? We adapted and survived.’ 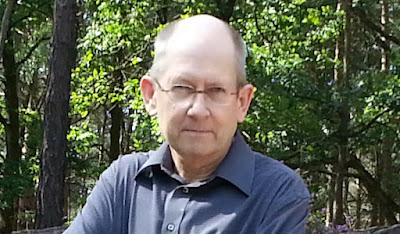 There are drones and everything is smart, from smart-walls to smart-cars, smart-planes, smart-wood, a smart bus, smart-doorways, smart-materials and smart-tables. And the prose is so politically correct it creaks, all the power-figures are female, including American President Cox and Space entrepreneur Serena Jones – a kind of hyper Elon Musk figure, and the only couple allowed to express love – and then grief, are two Gay men engaged to be married. The In-Jokes are Natasha ‘Tash’ Brand – who has a Nigerian-born mother, and is adviser to Science Minister Fred Bowles. With strawberry-blonde Melissa ‘Mel’ Kapur who rides the vacuum-dirigible Skythrust, ‘a human-made island in the sky’, and has an activist daughter called Jane. And there is Wu Zhi on Lodestone a million kilometres from Earth, whose estranged mother – Wu Yan, a senior space scientist in her own right, is central to the Chinese Replicator project on the planet Mercury. Even Astronomer Royal Charlie Marlowe resembles ‘Judi Dench as M’.
The novel’s central idea is that the sun vanishes at a point timed to coincide with a total eclipse, the reflected light from the visible planets going out in light-speed order. Facing a potential new Dark Age and rapid extinction, the sun is first relocated twelve-light-minutes out beyond the Kuiper Belt, but then reappears back in its original position. This is interpreted as a warning message from a galaxy-scale extra-terrestrial intelligence they name Galaxias. But what the warning means, and how to react to it, remains moot. As a response to Pioneer 10 it could be the imposing of limits, a quarantine that says so far, and no further. Faced with a power capable of shifting suns, is it wise to challenge that warning… if that is indeed the warning? Or can humanity forever cower, bottled up within the inner solar system by this Sinister Barrier for fear of provoking that seemingly limitless power further? And yet, Galaxias is less than omnipotent, the sequence timing of events suggests that it is limited by the speed of light.
Why Galaxias? It was the ‘Greek or Roman name for the Milky Way, as visible in the sky. Named for the spilled milk of a goddess. Root of our word ‘galaxy’… so, a singular name – yes. It. Not they. Monstrously powerful, but one entity.’ There’s later speculation of its aquatic evolution on a water-world radiocarbon dated to ten billion years ago, with resonances back to Stanislaw Lem’s 1961 novel ‘Solaris’, filmed twice, by Andrei Tarkovsky in 1968, and then by Steven Soderbergh, with George Clooney in 2002.
‘Another conference, Tash thought. Another all-nighter to prepare.’ And yes, it does seem that way at times. Like the characters, the reader gets conference-fatigue, conferenced out, until Naples disappears in a massive volcanic eruption that precipitates a nuclear winter. And on mission-day 513 the three-person crew of Pioneer 14 – including Wu Zhi with Texan Sara West and Russian Marina Petko, reach the Kuiper Belt ‘Blink-point’. A negative-matter anti-Sun. ‘The enigmatic artefacts of Galaxias.’ Yet there is no meeting. No first-contact communication. Galaxias remains an off-stage presence. All is inference and guesswork.
Baxter’s detailing of, first the strategies employed to combat the climate threat, the global plagues and pandemics, then the resounding aftershocks of the Sun’s disappearance are exhaustively pursued. Brainstormed fully as if it’s some rigorous intellectual exercise, what ‘Starburst’ magazine calls ‘big thinking and ‘New Scientist’-flavoured techspeak.’ The orbits of the worlds have been slightly altered due to the abrupt gravitational loss, with resulting extreme weather events, shifted seasons, tidal patterns and a new calendar. Electromagnetic ozone-layer irregularities cause communication problems, and there is seismic magma instability as the Earth’s interior adjusts. Hurricanes become hypercanes, as formerly dormant volcanoes erupt, and massive submarine quakes cause major land slippage. Halley’s comet fails to reappear. The Fermi Paradox is resolved. Elections result take a lurch to the right as the world becomes a more introverted paranoid place.
All of which is happening as governments struggle to formulate their response to ‘Blink-day’. America plans to defy Galaxias by deliberately confronting its ultimatum with a crewed dark-energy-powered spaceship following Pioneer 10 out of the solar system. Lodestone is part-cannibalised in order to construct Pioneer 14, powered by solar sail and a dark-energy ramscoop as the notoriously secretive Chinese scheme their own more nuanced response. Replicators devour Mercury just as they had devoured Mars in Baxter’s earlier work ‘Evolution’ (2002). Theoretical technologies are meticulously explained, with credits correctly assigned in the Afterword, including the Lodestone station located in the Earth-umbra, the Skylon spaceplane, self-replicating machinery and the Kardashev classification of hypothetical alien civilisations. As well as Negative matter and Dark Energy. Stephen Baxter does his research with unstinting thoroughness, while his well-earned status as hard science fictioneer in the Arthur C Clarke lineage commands the respect of helpful academics. The final sequences in which the sun and the entire planetary system are shifted out of Galaxias’ reach to the M-12 globular star cluster might just reference back to Clarke rearranging constellations in ‘The City And The Stars’ (1956).
This may be a self-contained stand-alone novel, but it does span millions. 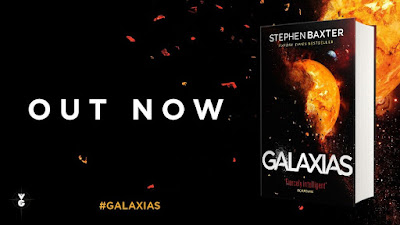 Posted by Andrew Darlington at 17:21