POEM: 'THE POET SELLS OUT!' 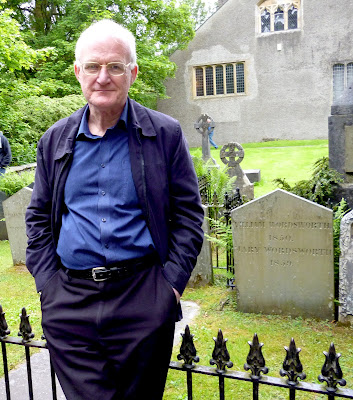 THE POET SELLS OUT…
‘AND TO BE YOUNG
WAS VERY HEAVEN’

stood in grassy Grasmere graveyard
where, engraved in graven image
on gravestone april 1850, but more,
the poet beneath died decades before,
at the moment this radical sold out,
Mary Wollstonecraft Shelly wrote it new
but for Bill Wordsworth? no, Prometheus
plucks inspiration’s fire back to very heaven
leaving only dull apostate blissful emptiness

we pace them, to Sour Milk Gill and far
scrabble up EasdaleTarn, the still stillness
just as still, with brooding poetic musings
maybe fretful mind-ticks of laureate remorse,
as he and Mary picnic, of swarming cities
of malnourished illiterate children and oh,
how the poor do proliferate irresponsibly
what price tumbrels and cordite now with
poetry impotent against such profligacy…?

but not me comrade, not me, and yet and yet
two decades since a reading in noise where
May gazes up at me with ‘why such anger?’,
me? ‘no, I’m not angry’, she knows more,
anger is what I breathe, screwed in so hard
beyond even knowing, scripting night-dark
subversive xerox texts, revolution in the air,
but hey, stuff alters, we organisms evolve,
adapt, or we ossify, it’s basic survival
targets shift, evaporate, or we die, yes?
we grow, we learn, devour old selves
old orders fall, walls move, change is
the only constancy, stability speaks lies

but Adrian Mitchell never sold out,
Allen Ginsberg never sold out
(but bought in differently anyway),
Mike Horovitz never sold out,
Heathcote Williams rages now in
‘Autogeddon’ and anti-royalism,
Dave Cunliffe still the tousled radical,
Shelly never sold out… and me?
here in Grasmere graveyard now,
feel that burn, feel the earth turn?
that breeze in the trees…
is it not changing…?
Posted by Andrew Darlington at 11:48