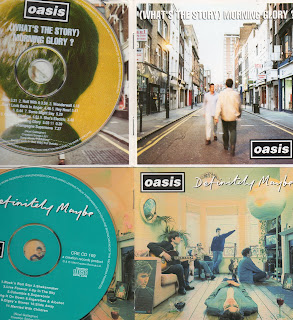 FESTIVAL REVIEW OF:
OASIS and others at LEEDS 2000,
Temple Newsam


‘We’re all in this together, right?’ insists Jarvis Cocker, up-ending his Evian water over his head, scratching and shaking his sopping hair like a long mangy dog, as the deluge pisses on. ‘In a field in Yorkshire’, this is a Humanitarian Disaster Zone. Elastica pull out. Eminem got detained by the PD, and doesn’t even bother sending over a stand-in Slim Shady Look-A-Like (you’ve seen the video, dummy, there’s dozens of ‘em!). The Fire Brigade get bottled and call for back-up as they attempt to douse some arson-blazing Porta-Loos. And somewhere, a voice lost in the mud yells ‘I AM SPARTACUS’. An answering yell echoes from the far side of the arena. ‘I Am Spartacus’. Then another, then another. While someone misquotes to his girlfriend ‘what don’t kill us makes us strong’. Hey, we all speak in media clichés nowadays.

So on stage – after Noel does his ‘Big Announcement’ about ‘Me, Liam, Alan, Andy and whatsisname’ splitting and going on ‘to get absolutely shitfaced on the absurd amounts of money we get for playing Festivals like this’, he does Neil Young’s “Hey Hey, My My”. And it’s a conscious vindication of Rock ‘n’ Roll roots. A song of hope and continuity defiantly asserting ‘rock ’n’ roll will never die’. But the lyric was also the source-text for Kurt Cobain’s suicide note about being better to burn out than fade away. And when Noel finally closes with ‘we’ll meet again, don’t know where, don’t know when’ – it’s a message of hope. But also quotes the soundtrack to Dr Strangeloves’ movie Thermo-Nuclear extermination of the world. So is this event a career pause button, or the longest suicide note in Rock ‘n’ Roll? All this post-modernism’s doin’ me crust in.

Earlier, there was Primal Scream. An awesome set more multi-layered than the Gallagher chimps could ever envisage, beginning with “Swastika Eyes” and taking in “Loaded” en route. And Bobby (‘you don’t fuckin deserve us’) Gillespie dedicates “Higher Than The Sun” to ‘Liam and the boys in Oasis’. They fail to return the compliment. Elsewhere Beck restates his credentials as the most intelligent man in modern music with stunning changes and genre-switches constructed with the precision of an Einstein equation, from sweet soul through hard harmonica blues into Latin and big-band hip-hop. It’s a bewilderingly impressive set... but then Rock ‘n’ Roll was never really about such intelligence-levels. Intelligence in music, like sugar in petrol, can do more harm than good. Rock ‘n’ Roll’s essential quality is inspired stupid. Elvis was inspired stupid. Lennon, who guests tonight on the Gallagher’s video screen, was more Buffoon-inspired-stupid than current mythology allows.

And Oasis get it – got it, dead to rights. The tired and battered hoary old war-horse of Brit-Rock gave guitar-bands a new – and last lease of 20th Century life with two decade-defining albums. Now they’re up against the impossible expectations their own success engendered. And while they can never be ‘Definitely Maybe’ (August 1994) or ‘What’s The Story (Morning Glory)’ (October 1995) again, they can still sure-as-fuck sheee-ine. After opening with “Go Let It Out” and “Who Feels Love” with no pause to inhale, Liam sneers an immaculately derisive ‘that’s the fuckin soundcheck out the way’ before kicking into “Supersonic” and “Shakermaker”, the lyrics doused in petrol, then torched, while snarling ‘you’re all crackheads’ at the ‘dirty red bastards’ in the audience. Noel announces “Digsy’s Dinner” then plays “Roll With It” – ‘don’t let any fucker get in your way’. For those that care about such things they do three songs off ‘Standing On The Shoulder Of Giants’ (February 2000), only one from ‘Be Here Now’ (August 1997) – “Stand By Me”, two ‘B’-sides (including the one ‘for the Stevie Wonder fan’), one cover, four from ‘Morning Glory’ and no less than five from ‘Definitely Maybe’ (with “Live Forever” done ‘for the two Leeds fans who got hit in Turkey’) with much crowd-baiting and banter between. The state of ‘Rasta-arse’ Liam’s SHOCK-HORROR-TABLOID anal-hair condition, and – come the encore, Noel jibes ‘we’re on overtime now, you can pay for it’, with Liam snapping back ‘not me, you’re fookin loaded, and I’ve got a divorce going on.’ Until – how can they follow a “Champagne Supernova” which infiltrates your brain like a soft narcotic? There’s only one. “Rock ‘n’ Roll Star”, the first track on their first album, recorded when they were still suspended between ecstasy and the everyday, when this moment, headlining the magnificent desolation of this disaster zone, was still the ‘dream that is real’. Well – they took that dream, and they made it happen. Full circle, to closure. Now it’s gone. Perhaps. And like Lennon said about the Beatles break-up, ‘it’s only a band’. Who cares? But actually, strangely enough, I care. 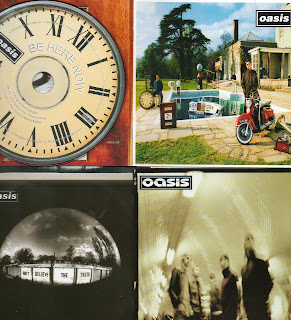 Gig Review of:
OASIS and THE BURN
at THE APOLLO, Manchester (2001)

The contra-Backlash starts HERE! While chart-music is vomit-full of pretty girls and even prettier boys, with guitar-dullards wallowing in angsty acoustic whimsy, here’s loud loutish hairy-arsed testosterone Lad’s Rock at just about the best you’re gonna get it. Thirteen months ago I’m watched them on-stage at ‘LEEDS 2000’ with Noel doing his ‘Big Announcement’ about ‘me, Liam, Alan, Andy and whatsisname’ splitting and going on ‘to get absolutely shitfaced’. Instead, they’ve toured the year solid. And it tells. Liam’s still master of the all-over body sneer, and he still gobs on stage, but the tantrums – or, at least, most of them, are history. Tonight, in this home-town converted movie-house, Oasis are tight and solid. No video-screen. Little dialogue. No banter. Liam in denim top, Oasis T-shirt and baggies. Yet touchably close. Humanly close.

We park up. Seems like we walk ten miles, to the fork between Hyde Road and Stockport Road, M12 6AD. Then spiral around a series of parallel barriers to even get close to the venue, an Art Deco 1930’s former-ABC cinema. The Beatles played here 20 November 1963. Later Hawkwind, Alice Cooper, New Order. And now, for the full forty minutes of their uncomfortable support-slot, Burn grab this fucked-up Oasis-centric audience despite itself. Unannounced, a local band without even a single available, they catch the acoustic buzz, but with strong add-on Blues harmonica to “Water To A Drowning Man”, toms and slide for “Drunken Fool”, and full-on noise for “Fight The Fire”. Expect more.

Until “Fuckin In The Bushes” rumbles empty-stage over the pa with the trademark down-angled mike awaiting Liam’s Quasimodo hunch... Some bands have a vision. It usually involves drugs. Sex. And behaving badly. But if it’s about anything at all, Rock ‘n’ Roll is about doing exceptional things that go beyond the narrow confines of ordinary life. Noel had a vision. It was simple, uncomplicated, and clearly defined on the first track of their first album. ‘In my mind my dreams are real, tonight... I’m a Rock ‘n’ Roll Star’. But unlike other no-hopers who also dreamed that dream, he had the songs to back it up. Against all odds, and despite their unpromising chemistry, somehow – between them, they ignited all that’s best and most memorable about Rock in the 1990’s. Arriving with “Supersonic” in April 1994, achieving a chart high of no.31 the same month that ‘Loaded no.1’ hits the newsagents at a special introductory price of 95p, and fortuitously getting a name-check on the cover, they were Ker-azy days. And Oasis shone, forcing the tired and battered hoary old war-horse of Brit-Rock into a new – and last lease of 20th Century life with two decade-defining albums. Until suddenly – after ‘Ten Years Of Noise And Confusion’, the clarity of the Oasis vision got complicated by its total fulfilment, stacked up against the impossible expectations their own success engendered. But while they can never be ‘Definitely Maybe’ or ‘What’s The Story (Morning Glory)’ again, they can still sure-as-fuck sheee-ine.

After opening with “Go Let It Out” they plunge right back to the start with “Columbia” (‘I can’t tell you the way I feel...’), before kicking into “Morning Glory” and “Supersonic” with no pause to inhale. For those that care about such things they do three songs off ‘Standing On The Shoulder Of Giants’, three new ones (meet the new song – same as the old song, ‘the dreams we had as children, fade away’, ‘god gave me soul’ (“The Hindu Times”) and ‘another new song – you can dance if you want’), some ‘B’-sides, one genetically-modified cover (“I Am The Walrus” with Johnny Marr’s eerie slide), six apiece from ‘Morning Glory’ and ‘Definitely Maybe’, and none at all from ‘Be Here Now’. Liam quits half-way. “Masterplan”, “Half A World Away” – for cousin Emma up in the circle, “She’s Electric”, and “Whatever” (fading into Mott’s ‘All The Young Dudes’), are all done solo stand-alone Noel. Then Liam is back for a stand-out “Gas Panic”, Noel’s guitar howling in pain, facing the amps, playing directly into them. But throughout, the spots never leave the Gallagher chimps, with ‘Alan, Andy and whatsisname’ left firmly in the background. Even when Mr Johnny Marr joins them for “Champagne Supernova”, he gets left in the shadows with no spot. Liam aping hugely behind him. Until – ‘as though you didn’t know’, it’s “Don’t Look Back In Anger”. And there’s only one song they can possibly follow it with. Tonight, “I’m a Rock ‘n’ Roll Star (in Manchester)”, the first track on their first album, recorded when they were still scrattling their benefits, a bunch of mates sat around a pub table, when this moment, was still the ‘dream that is real’. Well – they grabbed that dream by the scruff, and they forced it to happen.

Me and Susan are sat in the front-balcony. A girl reviewing for a Swedish newspaper leans in and asks if we’ve got a set-list, so we start into trading titles, they did this next, no, they did this. Eventually arriving at a satisfying consensus. And yes, it’s an impressive set-list bang-full of hits. The contra-Backlash starts HERE!