CD REVIEW: 'ALL SAID AND DONE' by BLODWYN PIG 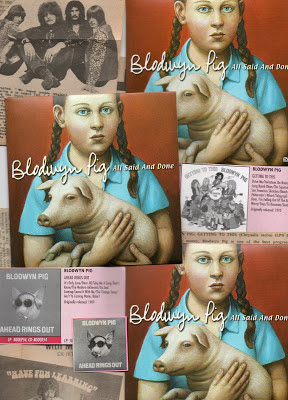 Tales of Ian Anderson’s control-freakery are probably apocryphal. About how, after Jethro Tull’s first incredible year he deliberately eased out equally strong-willed band-members to replace them with musicians more pliable to his will. So leading Tull off into hugely successful, but less interesting concept albums such as ‘Aqualung’ (1971) and ‘Thick As A Brick’ (1972). Now Mick Abrahams convincingly re-writes that history in his favour by re-recording the entire first Tull album – ‘This Was’ (1968) as a solo project, so emphasising the importance of his own not-inconsiderable input. And it’s a stunning reminder of just how innovative that album was. At a time when preconceptions had been blasted beyond the commercial stratosphere, and all was up for grabs with no obvious signposts, the Tull were playing to the max they were capable of, from the gut until the speakers vibrate. An ambitious jazz-Blues concoction unlike anything else before, or since. Cut it, it bleeds.

Here, from “My Sunday Feeling” with Mike Summerland’s walking bass and Steve Dundon’s scat-vocals, into the slow Blues “It’s Breaking Me Up” with Abraham’s excoriating extended soloing, and “Song For Jeffrey” on which I can hear the lyrics for the first time, Dundon excels at that most difficult task of convincingly replicating Anderson’s vocal while retaining his own interpretive skills. Highlights include the breathy swing of Roland Kirk’s jazz-paced instrumental “Serenade For A Cuckoo” and an outstanding 10:54min version of Dr Ross’ “Cat’s Squirrel” (via Cream), moving through tight-fingering sequences back to that jaggedly era-defining riff. The Anderson/Clive Bunker “Dharma For One” persists nicely to 5:15mins whereas Tull’s own re-creation goes to twice that on their live-at-Carnegie-Hall side of the ‘Living In The Past’ (1972) double-vinyl set (and longer still when I caught them doing it at Hull ‘City Hall’). Then there’s Abrahams’ prominent slide on his own “Move On Alone” and his writing-collaboration with Ian Anderson for “Beggars Farm”.

As such tracks indicate, that original line-up was a vibrantly creative contradiction, which hung together for a bare twelve months. Mick was already gone – temporarily replaced by Tony Iommi, by the time they did the ‘Rolling Stones Rock ‘n’ Roll Circus’ at the end of 1968. By then Blodwyn Pig had taken Mick into another career-phase. There’s a second CD in this elaborately-dressed package sampling new impressions of those subsequent incarnations (as well as a DVD interview explaining the project). He even reassembles his original Luton-based McGregor’s Engine (Andy Pyle on bass, Clive Bunker drums) – the template for Tull during its living guitar-to-mouth years, with “Let Me Love You Baby”, then Pig’s first slide-illuminated single (“Dear Jill”) plus highlights from ‘Ahead Rings Out’ (August 1969) and ‘Getting To This’ (August 1970), which precede Mick’s first exit from Pig. Supposedly fired from his own band! But there’s much more too, including piano sax boogie Blues (“Road Roller”), brawling Brit-Blues just aching for a showcase on Paul Jones’ Radio 2 R&B Show, old Alexis Korner (“I Wonder Who”), jaunty neat-picking rag, dust-bowl lament – “How Can A Poor Man” which compares well with Michael Chapman’s recently released version, plus three tracks revisiting the Pig’s 1994 re-union album ‘Lies’. Although it’s tempting to say that neither Anderson, nor Abrahams were ever to be as powerful apart as they had been – briefly, together.