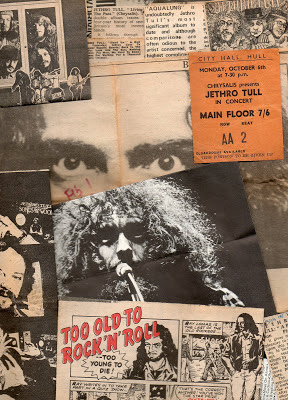 ‘Come lend me your ears while I call you a fool…’ Jethro Tull are a strange conundrum of a band. Always were. There are rumours, myths, stories, which may be apocryphal, or not. They centre on the alleged Machiavellian machinations of one Ian Anderson. You probably know them already. Questions and equations that fuck with your head. Things were less confused back then. The orange programme, with its white cover butterfly, announces Chrysalis presenting its Autumn Tour. And yes, 1969 had already been a year of significant escalation for the Tull. Earlier – 12th June, they’d played the ‘Locarno Ballroom’, a smaller venue, with Kenny Burrell as support. But just two weeks after that, “Living In The Past” shoved them up to no.3 (two places beneath the Beatles “The Ballad Of John And Yoko”), with associated ‘Top Of The Pops’ hit-status mega-increased visibility and quantum ticket-sales (7s 6d). From the jumpy bass play-in to the line about ‘now there’s revolution, but they don’t know what they’re fighting’, it catches the perfect pulse of the moment. Headlining at the City Hall this night represents a major up-swing.

It’s a big cold venue overlooking the City Square. Its chill unfriendly stone hosting an unruly audience rabble. Massed hairies within striking distance. First up – ‘Bang Bang it’s Terry Reid’, young and intense, doing power-vocals all over Donovan’s morally-dubious “Superlungs”, ‘she’s only fourteen but she knows how to draw’…? Well, things seemed different then. Less about under-age nubiles and more about liberation, freedom and joints. Then, Savoy Brown are leaden sweaty worthy plank-spanking Brit-blues. Tull are already different. So much is obvious. They’re not about to settle for the quotidian. Not so much against the current, for they take the same hard blues gantry to string it onto, but more a parallel evolution. More focus. More presence. More theatre, with Ian Anderson as the great shape-maker. Already an exaggerated half-‘Worzel Gummidge’ cartoon, half-Rasputin and half half-mad half-witted holy fool. A demonic lasciviously leering jester in a cod-piece. But amid the galumphing and cavorting, his frenetic flute-flaunting darts bright as mirrors as it plunges and soars. Burbling and bubbling with stomach-lurching mood-switch time-changes. “Living In The Past” itself is taken in 4/5 time. Would that there’s a chart band now capable of such muscular dexterity.

When they first emerged from Blackpool, or thereabouts, in the apocalyptical final month of 1967, playing their jazz-blues set at a ‘Marquee’ residency, they seemed four more-or-less equal musicians – solid Mick Abrahams (guitar), Glenn Cornick in black waistcoat and hippie headband (Gibson Thunderbird bass), Clive Bunker (drums) and Anderson (flute and vocals). In fact, the Tull’s debut single – “Sunshine Day”, is an Abrahams song. And much later Abrahams would rerecord their debut LP ‘This Was’ (October 1968) in its entirety (as ‘All Said And Done’ in 2005) as a deliberate act of reclaiming his own creativity from the artifice subsequently structured around the group. For sure, it’s an album that illustrates Ian’s breathy stylistic debt to Rahsaan Roland Kirk with his “Serenade To A Cuckoo”, but also debuts “Dharma For One” as a showcase for co-writer Clive Bunker’s drum solo, an extended part of their live set at least through to the 4 November 1970 Carnegie Hall ‘Drugs Benefit’ set hoovered up onto the ‘Living In The Past’ double-LP (1972). The music-press styles such musical indulgence as extemporisation, like jazz, and since Eric Clapton and Jimi Hendrix the improvised solo has been de riguer. Even when not all bands are adequate enough to deliver, devaluing the currency. Tull seldom disappoint. Supple enough to flex around the testosterone jousting, excess kept in check. It’s impressive. At Hull’s ‘City Hall’ I’m impressed, undeniably. If more cerebrally than on gut-level.

When they started, as Anderson told journalist Nick Logan, they played ‘other people’s music, predictable Blues stuff, things Mick Abrahams said we should play.’ But ‘playing variations of “Dust My Broom”’ was never going to be enough (‘Melody Maker’, October 1970). And when it comes to writing, Mick doesn’t like Ian’s songs, and Ian doesn’t like his. So Mick Abrahams is first to quit, to become almost like Tull’s Pete Best – to ignite a more purist Blodwyn Pig with ‘Ahead Rings Out’ (August 1969). Exuding eloquent derision on a recent BBC4 TV-doc Ian Anderson regales how Terry Ellis and Chris Wright, the label suits, had at first suggested that just maybe Abraham’s guitar should be Tull’s lead instrument instead of Anderson’s flute. He rolls his eyes to the ceiling in patronising ‘what do THEY know’ exasperation. As if…? Cunning, articulate, with a total absence of false modesty. A sly fox, for sure. Was this the plan all along? Mick Abrahams is replaced for second Tull album ‘Stand Up’ (also August 1969), by Martin Lancelot Barre – its elaborate novelty gatefold pop-up sleeve inset with card band-figures that, yes, actually stand up. With “Bourée” which he announces on stage between adlibs and doo-dad scat as ‘this one’s by Bach, I couldn’t have wrote it, it’s just ripe for prostitution’, and it’s an artful stop-start jazz interplay between bass and flute over a Bach piece in ‘E’-minor, a walking dialogue interspersed with bestial grunts and tasteful balance. And “Fat Man”, a Celtic hoe-down scored with Barre’s high-tuned mandolin and Cornick’s manic-rattling bongos, riddled with politically-incorrect jibes at obesity.

Glenn Cornick survives until ‘Benefit’ (May 1970). He was fired – or ‘invited to leave’ during the album’s tie-in US tour. He forms Wild Turkey as Tull continue ever-upwards. And ‘Aqualung’ (March 1971) is the last to feature Clive Bunker. He leaves to flicker briefly as part of Jude. So the coup – if coup it was, is complete. The resulting cleansed line-up leaves only Anderson from the original four – not just the flute-player, but the group. The original Jethro Tull was one man, inventor of the horse-drawn seed-drill. Is Jethro Tull still one man? One man, with Barrie ‘Barriemore’ Barlow replacing Bunker on drums, Anderson’s long-time friend Jeffrey Hammond-Hammond on bass, and grammar-school pal John Evans recruited on keyboards. Fine players all, doubtless, with impeccable skill sets. But following the cull, they’re also musicians more amenable to interpreting Ian’s ideas. A less conflict-prone restructuring, less inclined to pull troublesomely towards alternate poles. With long-standing associations going back to the Blades – for this line-up is a virtual replication of Ian’s first group in his native Blackpool, the ‘Golden Mile’ and the ‘candyfloss-sales man’ that he gets all reminiscent about in “Up The ‘Pool”. And it works.

Uncomplicated by internal opposition, the ‘Aqualung’ sleeve-art caricatures the album-themed rough-sleeper in ‘Uncle Nasty’ tatty-overcoat – a vivid blow-up of Anderson’s ratty stage-persona. While the pervy ‘sitting on the park bench, eyeing little girls with bad intent… watching as the frilly panties run’ is feral in pace, even given its killer metal riff. Ian’s cup of bile runneth over in its cracked North Country voice. It’s what he’d later describe as ‘a singer of these ageless times, with kitchen prose and gutter rhymes’. But “Locomotive Breath” gets you ‘by the balls’, accelerated by the shuffling madness of Barre’s choppily-chugging guitar work, using the runaway steam-train as metaphor for life hurtling you towards death. Part of the album’s second side reserved largely for pointed attacks at religion, with the Pope coming in for some verbal kicking along with those gods you ‘wind up on Sunday’, or whose names are reserved as a final refuge in death. It’s an LP astutely art-targeted at the sniggery prurient puerile adolescent male. All those sixth-formers who cleave to the hard poetry of ‘snot running down his nose’, who carry the album conspicuously to establish that elitist clear blue division that stands them above and apart from the trashy glam-glitter stomp of the latest ‘Top Of The Pops’ singles from T Rex or Slade. With the distinction between concept album and ironic comment on concept albums getting lost somewhere in translation.

The rich wine-red ‘Living In The Past’ double-LP sleeve also shows just Ian in characteristic one-legged troubadour pose. Yet its pick ‘n’ mix compilation format draws in their run of clever boisterous exuberant singles, each of which serves its purpose in shoving Jethro Tull across the awareness threshold, while retaining their integrity. “Sweet Dream” (no.7, 1 November 1969) with dense horns and David Palmer’s orchestration, but still space for a blistering guitar break. The intriguing “The Witch’s Promise” which reaches no.4 (24 January 1970). And the charting EP “Life’s A Long Song” (no.11 in September 1971) about the brevity of an existence that ‘ends too soon for us all’, with keyboard and tasteful acoustic guitar-duetting between Anderson and Barre. It opens ‘when you’re falling awake’. You don’t ‘fall awake’, you ‘fall asleep’. It’s wordplay like Procol Harum’s ‘all hands on deck we’ve run afloat’ on their “A Salty Dog”. Ships don’t ‘run afloat’, they ‘run aground’. It’s creatively poetic use of language above and beyond gratuitous snot and glimpsed panties. The track promises ‘don’t you fret, don’t you fear. I will give you good cheer’, and it delivers on its promise.

‘Thick As A Brick’ (March 1972) with a sleeve that opens up into a twelve-page spoof-newspaper, is a single 43:46-minute track, supposedly penned by schoolboy ‘Gerald Bostock’. ‘I may make you feel, but I can’t make you think’ pens the fictional Bostock, ‘ I’ve come down from the upper class to mend your rotten ways.’ And ‘A Passion Play’ (July 1973) is also a single track broken into ‘Acts’ – pretentious? Moi? To Allan Jones it resembles ‘a naïve adventure that sounds like the results of Roy Harper jamming with the Nice on lyrics by Tristan Tzara’ (in ‘Melody Maker’, 5 February 1977). Much-derided by critics it leaves you crying out for the one concise single-length accessible track. Delivered finally on ‘War Child’ (October 1974) with US no.12 hit “Bungle In The Jungle”, a luminously brilliant record by anyone’s standard, one that rediscovers the playful frivolity and fun of the single after all the preceding dour intricacy. Against a slithery snuffling background of rainforest noises he anthropomorphically warms ‘I’m a tiger when I want, love, I’m a snake if we disagree’. Well, maybe. But soon it would no longer matter. All those Prog-Rock sixth-formers would start slashing their hair spiky-short in response to Punk and furiously denying they’d ever listened to Yes, ELP… or Jethro Tull, like never, ever. While the realignment shunts Tull off into a new Folk-Rock parallel dimension where trend no longer matters. Their audience-future predictably assured.

But that still waits beyond tomorrow and tomorrow. For now Jethro Tull is a strange conundrum of a band of contrasting personalities. A jazz-rock combo. A sell-out chart band. A seven-legged Blues group with a manic edge. Things end in radiant meltdown, releasing the audience rabble across the chilly sprawl of City Square into the drabber, duller world of everyday reality. 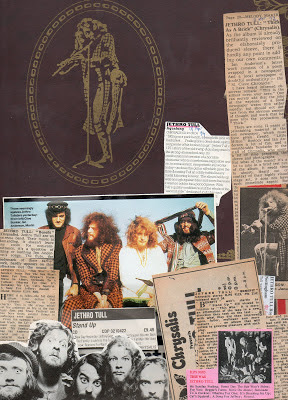 Posted by Andrew Darlington at 22:13

eToro is the most recommended forex trading platform for new and professional traders.