Live: Utah Saints at the Leadmill 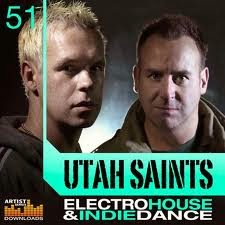 THESE ARE THE VOYAGES OF
THE STARSHIP UTAH SAINTS!!!

UTAH SAINTS and RAWHEAD
at ‘The Leadmill’, Sheffield

‘The thing’s hollow – it goes on for ever, and – Oh my god, it’s full of stars!’ breathes David Bowman as he melts through the ‘2001: A Space Odyssey’ (1968) Star Gate and swirls into Stanley Kubrick’s ‘ultimate trip’. It’s happening now on these screens arched around the strobe-drenched ‘Leadmill’ stage as Utah Saints electro-syncopate blips and spatters of “Solution”. Visuals flash up at blur speed. It begins with ‘COMPUTER MALFUNCTION’ then dissolves into psychedelic waves of awesome color.

THESE ARE THE VOYAGES OF THE STARSHIP UTAH SAINTS!!!

And already it’s a night of seductive contrasts. Rawhead are made of mutated metal from Manchester, fronted by Dave Hicks who co-wrote “Seven Reasons” with Peter Hook as part of New Order’s spin-off band Revenge. ‘Hey, Sheffield is cooler than Manchester’ he grins through Jim Morrison shocks of hair over a music to dress up and carry a whip to. The guitars lodge midpoint between Motorhead and the Ramones. But there’s a subterfuge of sequencers that kick the melange into new fusions that occasionally achieve spectacular lift-offs, as in “Come With Me” – probably a sexual innuendo, with Dave howling ‘twenty-first century in your eyes’ as the dance-floor erupts. 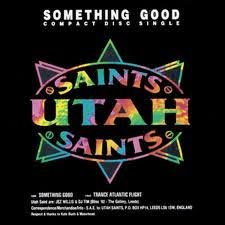 Then, from nowhere – well, from Leeds actually, Utah Saints inflicted two of the decade’s most audaciously cheeky dance hits into the Top Ten. But they’re raiders, not just traders. The beats are exquisitely agitated, driving the images to distraction, and they perform linguistic origami with their samples. In a sonic promo for the advancement of ludicrous shorts ‘Surfin’ Jez Willis plays with a Sci-Fi gallery of keyboard-axes strewn with a pinboard of lights and digital windows. While DJ Tim Garbutt squats atop his decks to drop phrases and breaks from his twelve-inch imports into the jittery hyperactivity of speed-driven rhythms. The excitement is unreal – in the exact sense that it’s not always obvious who plays what.

They open with “New Gold Dream” – figures vibrate on the screens, “82-83-84”, then “What Can You Do For Me?”, Nintendo simulations of the Planet Fortuna, Elvis 1967, the new single “I Want You”, Arnold Schwarzenegger, and “Gimmie Shelter” – new twists on the Rolling Stones’ war-children classic from the ‘Putting Our House In Order’ (1993, Food Records) charity compilation.

Utah Saints can only belong to the 1990’s. The perfect post-industrial Pop. They finish with “Something Good” and Hal’s ‘2001: A Space Odyssey’ ‘LIFE FUNCTIONS TERMINATED’ punch-line. And for a moment of stunned suspension, the Leadmill noise nightclub communes with the cosmos. 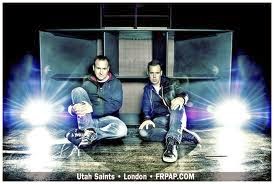 Posted by Andrew Darlington at 19:45

I wasn't even remotely familiar with the Utah Saints. I came late to enjoying this style of music so thanks!