New Book: 'The Kindest Lies: The Lyrics Of John Lyle' 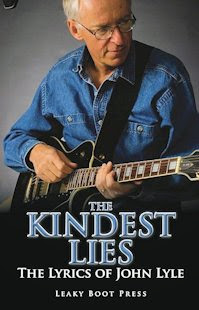 Rock ‘n’ Roll he gave you the best years of his life. Following early group projects and rootsy solo albums John returned home to Vancouver to work a postal round. Learning that Paul Rodgers happened to be staying over along his delivery route he slips a demo of songs into the mailbox. After a tactful pause the Free/Bad Company frontman – ‘down to earth, just another guy’, follows him down the street enthusing about the songs. But never records any of them. Then moviemaker Robert Altman gets John to record some backup Leonard Cohen songs for the soundtrack of ‘McCabe & Mrs Miller’ (1971) in case of licensing problems with Laughing Len’s originals. There are no problems, and John’s Sisters Of Mercy’ and the rest get shelved. John meets Bob Dylan too. Or rather, stands beside him at the 1972 Mariposa Festival. Neither spoke. A book of poetic lyrics is difficult if you don’t know the songs already. You can get them from iTunes or hear snatches on his CDBaby page, enough to entice and maybe buy some. His slurred rough-edged story-telling voice adds bitter-humour dimensions to the page. But the lonesome cowboy shaggy-dog ‘There’s A Hole In My Lariat’ stands up without. And this engaging pick ‘n’ dip anthology is interspersed with anecdotes from the personal rim of Rock, like catch-up bulletins from an old friend. Intrigued? You should be!
Posted by Andrew Darlington at 20:38

Excellent book. His songs are not just lyrics sung to music they are celebration of life. Everyone must listen to his soulful voice. It put a spell on me.