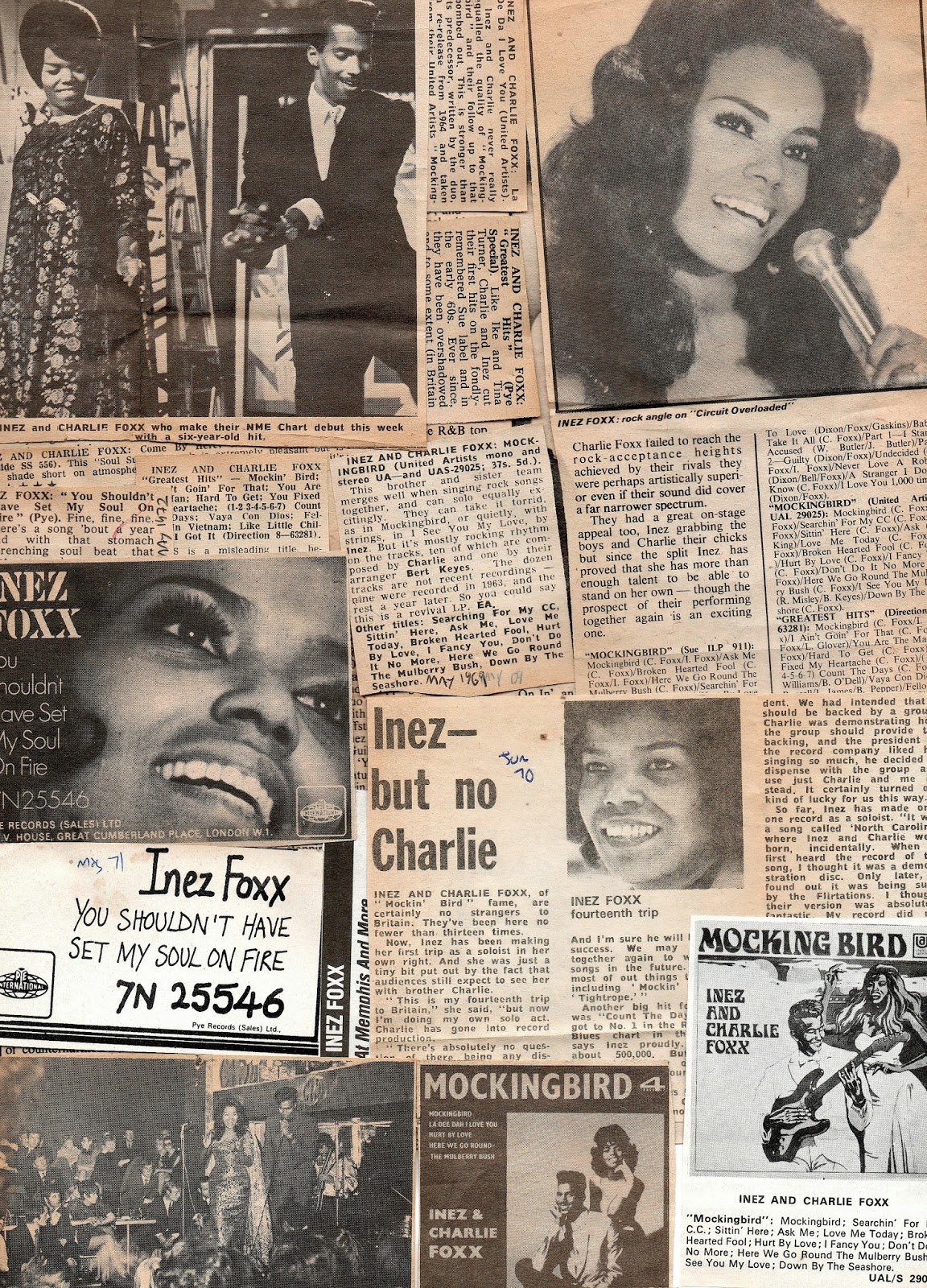 Retro Album Review of:
‘MOCKINGBIRD: THE BEST OF
INEZ AND CHARLIE  FOXX’
by INEX AND CHARLIE FOXX
(Stateside SSL 6000, 1986)


The more I hear the likes of Atlantic Starr or Patti Labelle/ Michael McDonald the more I’m grateful for the techno-primitiv of boy-girl duo’s – Inez & Charlie Foxx from Greenboro NC. Stood out in stark relief against the schlock-digital AOR Radio Sweethearts, this stuff is raw, spontaneous, a jolt of sheer joy to the central nervous system. Although never a Tina T or an Aretha F, Inez was pure undiluted Soul of the lighter flash ‘n’ trash school – she could testify on “Hurt By Love” with a scalding scolding finger-pointing outrage plugged direct into Gospel tradition, with elder-brother Charlie’s vocal-sparring chant orbiting supportively, urging her on in much the same way as, live, he’d physically dance around her in the oddest long-leggy spider-bizzaro visual routine this side of James Brown. His elaborate pompadour and beanpole physique perfectly contrasting her sinuously guileless eroticism on the stand-out 1964 appearance I clearly recall on ITV’s ‘Scene At 6:30’.

On ‘Mock-YEAH-ing-YEAH-bird-YEAH-yeah-YEAH’ – their highest chart flier, the two call-and-response voices juxtapose counter-harmonies, Inez’ top-line wail versus Charlie reciting hybrid bass. Lines twine and slide, complement and compete deliciously around a schoolyard jingle already oral history when Bo Diddley first plucked it out as HIS anthem, yet still shiny-newer than anything on this week’s playlist. An inspired studio accident – Charlie’s eccentric interjections originally intended as guide vocals for a backing group who bunked off, his phrasing stretches and warps the lyric (‘it’s gonna break this heart of my-yi-yi-yi-yine’) completely out of the realm of language and into pure bliss. “Mockingbird” still deguts all opposition (there IS no REAL opposition!).

A ‘Billboard’ no.7 in August 1963 – on the Symbol label, “Mockingbird” eventually charted here as high as no.33 on a United Artists reissue in March 1969. By then, “Hurt By Love” on the original Sue had already reached the UK no.40 in July 1964, promoted by tours with the Spencer Davis Group, and the Rolling Stones. But there are other blasts from R&B’s age of innocence here, sixteen tracks lovingly transcribed from Henry ‘Juggy Murray’ Jones’ antique ‘Sue’-label originals. There’s “La Dee Dah I Love You” – solid power from the Motown-charged handclap intro through its quirky staccato drum-breaks and honking sax, “Here We Go Round The Mulberry Bush” – another nursery rhyme re-cast by Charlie (in cahoots with regular arranger Bert Keyes), and “Broken Hearted Fool”, showcasing Inez’ range spun out over a broken-backed rhythm-track thefted from “Mockingbird”. And more…

From what followed – a coupla minor gems for Musicor subsidiary Dynamo, including the excellent “Count The Days” and Northern Soul favourite “Tightrope”, an Inez solo stint with Stax subsidiary Volt, an early-seventies Inez solo scorcher “Circuits Overloaded” (1974), and writer-production credits on product as diverse as the Platters (Inez co-wrote their “I Love You 1000 Times”) and Gene Pitney (Charlie co-writing his final US hit, “She’s A Heartbreaker”) – there was nothing to quite recapture the primal power of what’s en-vinyl-ised in all its uniquely tacky grandeur here. Charlie died of leukemia 18 September 1998, aged just fifty-eight. But, although “Mockingbird” has never quite vanished over the intervening decades and years, it’s GREAT to have it back!