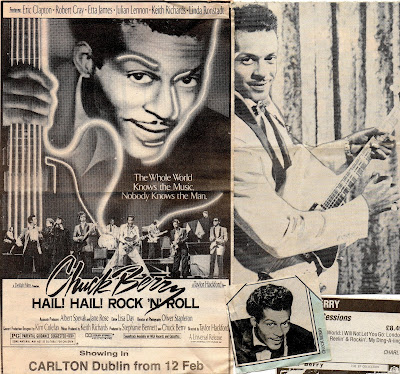 A guitar string, or that of any stringed instrument
for that matter, vibrates in transverse waves
along its length, creating longitudinal ripples in
the surrounding air that receptive ears pick up
and interpret as sound. The waves created by different
string tensions produce different notes, so the
sound from the plucked string can be modified,
altered and changed as its tightened or loosened.
This pretty-much explains the physics of the
Rock ‘n’ Roll guitar. From Chuck Berry to
Hank Marvin, from Jimi Hendrix to Kurt Cobain.
But within those simple audial mechanics
lie multiverses of creativity... 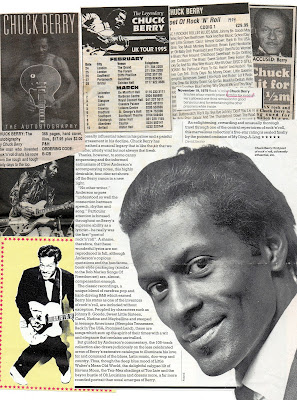 Chuck Berry is a Rock ‘n’ Roll poet. There are those amongst us who’ve known this since… um, 1957. Tonight he proves it beyond doubt. First, he breaks a string on his cherry-red guitar. An eager road-crew spirits it away for restorative surgery. So Chuck faces down the crowd… and recites a long poem. At first they don’t know what’s going on and there’s some restless uncertainty, he’s doing this rhyming jive about ‘flipping jazz and lullabies’ in a gilded fantasy-palace hung with elaborate rugs and paintings on the wall, an ‘impressionist blur’, a ‘nude on a zebra-skin’, an ocean-scape so real it ‘makes you feel the sea on your face’. And more. On the one occasion he stumbles a line he chides himself ‘oh shit!’, when someone in the audience yells for “Maybelline” he tells them ‘SHUDDUP!’ Until they listen rapt, and he wide-grins back at his bassist ‘you know, I think they’re enjoying this.’ Then the guitar returns, and he ends ‘that’s the way I feel about sin. I’ll finish it next time I’m in Bradford.’ I still don’t know what the poem was, or where it came from. But I’d be intrigued to find out…

I look at my watch… it’s 10:05, and it’s 2004. Elvis, Beatles, the Stones, Sex Pistols – they’ve all done Chuck Berry. No-one else can claim that. No-one. And, it’s no exaggeration to say the 1960’s Brit Beat-Boom wouldn’t have happened without his style-template, or his highly coverable back-catalogue. We all know this. But it needs restating. Now he’s seventy-seven years old. ‘People said that Rock will fade, it’s forty years since that remark was made’ – more like fifty years, but who’s counting as he energetically duck-walks across the stage under a storm of digital cameras and imaging-phones. And he’s still springing changes. He lyric-chops “Rock ‘n’ Roll Music” and “Roll Over Beethoven” Dylan-style to derail potential sing-alongs. You join in with Chuck only when CHUCK invites you to – for example, on the declamatory ‘Hail Hail Rock ‘n’ Roll’, even though it now less ‘delivers us from’ as sucks us back into those ‘days of old’. But he ad-libs changes too, ‘while I’m still kickin, I’m gonna keep pickin’. And a ‘Carry On’-style insert to an epic “Reeling And A Rocking” goes ‘I looked at my watch, it was quarter-to-three, she said wait a minute Chuck I gotta go to the WC’ – toilet humour given added frisson by Chuck’s alleged innovations with a closed-circuit hidden camera in just such a closet-situation.

But while Elvis was hauling Rock towards R&B, Chuck was shrewdly nudging black music towards Top 40 playlists into its enduring focus on guitars, cars and girls, where it’s lodged ever since. Chances are audiences this side of the Atlantic – no videos, no MTV way back then, first saw him doing “Sweet Little Sixteen” as part of the festival-movie ‘Jazz On A Summer Day’ (1960, but filmed in 1958). And tonight, in a garish 3000-capacity Manningham Lane Club, he takes it back, beneath the hits, to where it all came from, by playing generous slabs of Chicago Blues, deep with Chess resonances. ‘When I say Blues I don’t mean ‘blues’ (pronounced with camply effeminate exaggeration), I mean the BLUUURGHS!!!!’, and “Ev’ry Day I Have The Blues” comes with a searingly dirty guitar-sound, then “It Hurts Me Too” playing guitar at shoulder-level, joining the pianist to pick out runs on the shared keyboard, one called “As Long As I’ve Got My Guitar” and then “Honest I Do”, authentic despite improvising ‘no other audience as lively as you’ and ‘when I come to Bradford, it’s the best time I ever had’. I bet he tells that to all the audiences. Sometimes I do, then again I think I don’t. 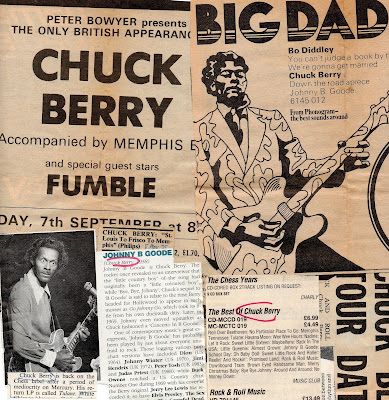 Posted by Andrew Darlington at 17:26

I was at this gig, amazing night and I had the honour of dancing on stage with the great man, unfortunately we didn't take a camera so no record to show my children :(

Ever tried automating your free satoshi collections by using a BTC FAUCET ROTATOR?

Join 1,000,000's who have already discovered better strategies for investing in Ripple...

Learn from experienced eToro traders or copy their trades automatically

Did you consider trading with the most recommended Bitcoin exchange service - YoBit.

YoBit allows you to claim FREE CRYPTO-COINS from over 100 unique crypto-currencies, you complete a captcha one time and claim as many as coins you want from the available offers.

After you make about 20-30 claims, you complete the captcha and keep claiming.

You can press CLAIM as many times as 30 times per one captcha.

The coins will stored in your account, and you can exchange them to Bitcoins or Dollars.

If you are looking to buy bitcoins online, PAXFUL is the best source for bitcoins as it allows buying bitcoins by 100's of different payment methods, such as Western Union, MoneyGram, PayPal, Credit Cards and they even allow exchanging your gift cards for bitcoins.