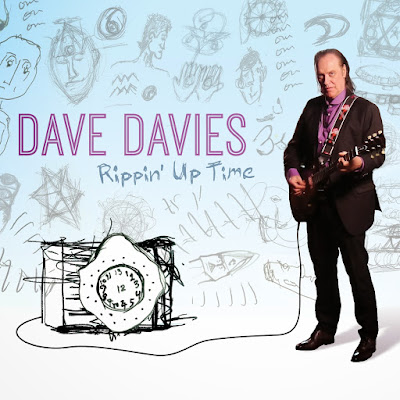 There are two possible meanings to the title. Either it’s time to ‘Rip It Up’, as in the hard-rocking Little Richard sense. Or else Dave is intent on ripping up the very concept of the space-time continuum itself. As it is, this album succeeds in doing both. Ten raw revved-up and out of their mind tracks that mangle nostalgia and novelty, reflection and autobiography with savage upfront energies. There are teasing hints of familiar Kinks riffs – but hell, he created them, he’s entitled to use, reuse and abuse them as he chooses. There’s one about the pub down on Finchley High Street where every Friday night the “King Of Karaoke” croons “Bohemian Rhapsody”, “Unchained Melody”… and quotes “Sunny Afternoon” too. “Front Room” tells the Davies’ Working Class family history, as the brothers form a group – ‘with Pete (Quaife), Ray and John (Start) from next door’, using “You Really Got Me” as reference point. It’s also a kind of answer to Ray’s “Back In The Front Room” dialogue passage on his ‘The Storyteller’ (1998) project. The laugh-out-loud prurience of “In The Old Days” retrospects that same dysfunctional childhood, while “Semblance Of Sanity’ with its shambling whispered ‘sh-sh’ offers confirmation of ‘peace, truth, love and understanding.’ There’s some creative input from Dave’s son, Russ Davies. But there’s no maudlin whimsy, there are raucous guitars yes, but snarling synths too. As the only Kink to have solo chart hits, Dave’s albums outside the group have been inconsistent, but largely enjoyable. This might just be his best, his voice effectively expressively slurred, raggedly lyrical, but tight. The Man. The Myth. The Legend.