Grateful Dead: Bring Me The Head Of Jerry Garcia 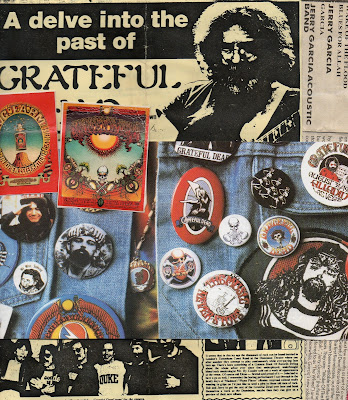 BRING ME
THE HEAD OF
JERRY GARCIA 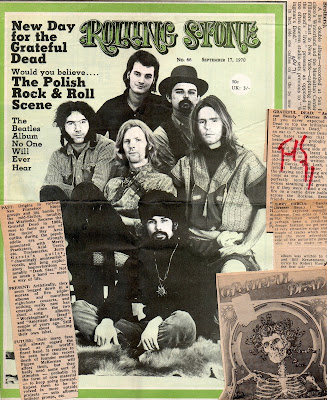 Don Henley saw a Deadhead sticker on a Cadillac. In “The Boys Of Summer” he relates how it spoke in a voice inside him ‘don’t look back, you can never look back’. Now it’s time to look back. Jerry Garcia slowed with a bang into the Last Chapter of The Book Of The Dead. And now, when the telecast obit’s need a sharp soundbite, they get a live triple-album.

The deaths of John Lennon and Elvis Presley place a final punctuation on their decades. But they belonged to the world.

The Grateful Dead remain cult. Even after all these decades. 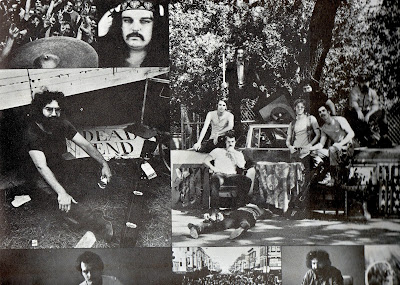 Non-initiates say ‘Jerry who…?’ The ‘Sun’ says ‘DEAD STAR DEAD’. Yet it was the Dead who patented the since-maligned term ‘Community Band’. In the UK we had Man, Edgar Broughton, Pink Fairies… the Levellers. Life-style totems. Benefits. Free Gigs. Personal bonding with their tribe going way beyond anything as trivial or as ephemeral as vinyl or music. With the Dead, that bonding remains… remained. And Jerry Garcia – a stoned moon-faced cartoon from the ‘Furry Freak Brothers’, was always the Head Dead. Reviewing their first LP in July 1967 ‘Melody Maker’ calls him ‘one of the most boring lead guitarists ever to inflict his presence on a group.’ Many years later, when asked what the Dead had learned over their twenty-two years as a band, Garcia smiles his goofy avuncular grin and says ‘we expect to get the hang of it any day now.’ 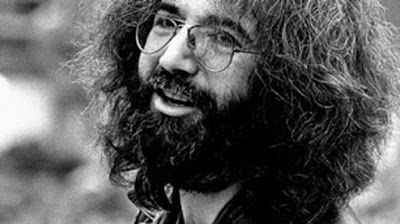 There’s a recent Dead CD made up entirely of different versions of Garcia’s “Dark Star” (‘Grayfolded’, 1994/1995). Great bands usually invent new maps of their lives every few years. The Dead, loose-riffed and loose-trousered, always steered by Zen and the Art Of Endless Improvisation. With Jerome John Garcia at the exact centre of its sprawling psychedelic chemistry. Inactive for much of the nineties the one-time Captain Trips finally unhappened 9 August, following a heart attack in a Drug Rehabilitation Centre fighting heroin addiction. And even Bill Clinton – the dope-smoking President who never inhaled, was moved to eulogy. Adding a warning to the nation’s youth that ‘you don’t have to have a destructive life-style to be a genius and make a contribution.’ Perhaps. Perhaps not. 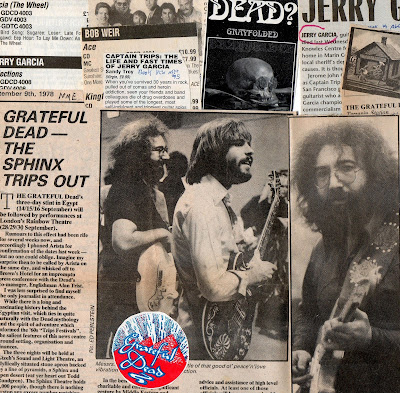 The 1987 Grateful Dead single “Touch Of Grey” was their only US Top Ten record. Their albums seldom graze the Top Thirty. But what the Dead had was authenticity. When Hippie movie-goers wrangle over whether Dennis Hopper smokes real marijuana in ‘Easy Rider’ (1969) it’s not just nit-pickery. It’s a litmus for the sniff of hands-on authenticity. There was never any doubting that the Dead were for real.

Evolving rapidly out of Folk, Jug-Band and Bluegrass into R&B the then-Warlocks drink Ken Kesey’s LSD-spiked Kool-Aid, and create a beautiful mythology. ‘Synchronicity spoken here!’ says Tom Wolfe, ‘nothing was in perspective, nothing had any touch of normalcy’ (‘The Electric Kool-Aid Acid Test’, 1968). ‘You can imagine what it was like’ recalls Jerry, ‘to have a whole band completely out of their heads on acid. It’s weird. It’s all out of time and the timing is all peculiar.’ The Skull-and-Roses sleeve-art by Rick Griffin, the spaced ambience, the inventive technical skills of their fully meshing free-form explorations, the ‘Extended Family’ of interactive contributors all play a part. Robert Hunter’s lyrics. The Day-Glo posters. But it’s Garcia’s grizzled presence that’s always the defining point. And he was always grizzled. On the sleeve of their debut album – covering material like “Morning Dew” and “Good Mornin’ Little Schoolgirl”, he wears Uncle Sam’s Stars-&-Bars Top Hat against the molten surface of the sun. And even clean-shaven he already looks grizzled. 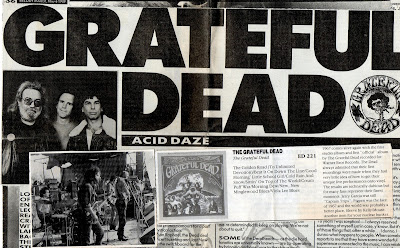 But despite playing Woodstock and the murderous Altamont Festivals they’re still $100,000 in debt to Warner Bros due to failed album sales. It’s not until 1970s ‘Live/Dead’ double LP which finally captures something of the Dead’s mystique, and the more accessible Country-Rock of ‘Workingman’s Dead’ (June 1970) and ‘American Beauty’ (November 1970) that they begin to achieve something like commercial recognition. While Garcia is also out freelancing solo with his ‘Garcia (The Wheel)’ (January 1972) album, or with New Riders Of The Purple Sage, Jefferson’s Airplane or Starship. And he’s there – grizzled and grinning on the liner photos of Crosby Stills Nash & Young’s ‘Déjà Vu’ (March 1970), or indulging his continuing taste for the more obscure byways of Americana Trad, Bluegrass and Country with Old And In The Way. Vocally he’s as light as his fretwork. The obvious technical limitations of his voice offset by its flesh and blood human warmth. His first instrument was the six-string banjo, and beyond his chemical Away-Day explorations, it was this simplicity he returns to. His solo ‘Run For The Roses’ (1982), ‘Reflections’ (1976) and the Jerry Garcia Band ‘Cats Under The Stars’ (1978) can be self-indulgent to the point of lethargy. While his down-home projects with the likes of Merl Saunders suffer critical neglect. But his pedal-steel guitar on 1988’s ‘Almost Acoustic’ can be near transcendental. 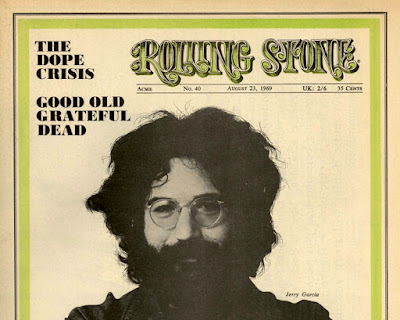 I saw the early-evening five-hour Dead set 7 May 1972 at the Bickershaw mudbath. We were all chemonauts together. But by the time of ‘Wake Of the Flood’ (1973), ‘From The Mars Hotel’ (1974), and the Dead’s first for Arista ‘Terrapin Station’ (1977), they have become a nomadic touring community, a cultural phenomenon spanning generations, a continuity the survival of which is hardly dependent on record sales at all. More an essential part of the American musical pageant. 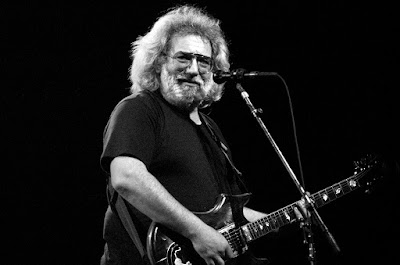 Jerry Garcia’s narcotic problems through the mid-eighties are well-documented. He endures Drugs Rehabilitation following a five-day coma, returning to tour onstage with Bob Dylan. Then he’s hospitalised with ‘exhaustion’ in 1991, cancelling concert dates the following year due to ‘ill-health’. The final Grateful Dead concert with Jerry Garcia was in Chicago on 9 July 1995.

It’s barely conceivable that the Dead can exist in any meaningful form without him. But we’re going to continue re-exhuming the Dead for some time to come. 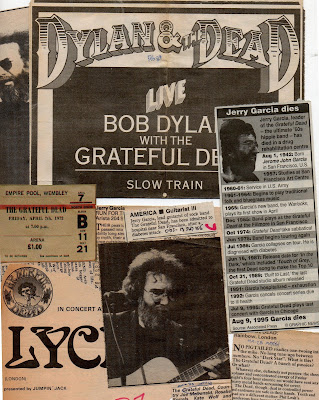 Posted by Andrew Darlington at 17:59

I got my first electronic cigarette kit at Vaporfi, and I enjoy it a lot.