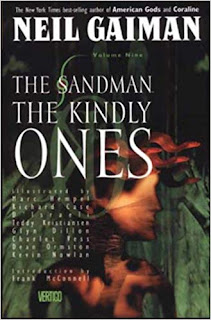 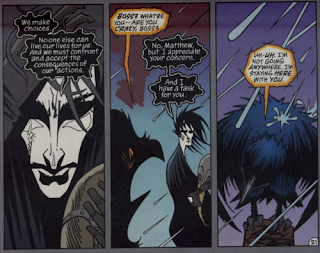 There’s a Candy-Coloured Clown they call the Sandman. Tiptoes to my room ev’ry night. Just to sprinkle stardust and to whisper ‘Go to sleep, ev’rything is alright’. Roy Orbison sang that in 1963. Nothing to do with this hefty and lavish book. But then again, it just might be. Neil Gaiman’s five-year ‘Sandman’ story-arc (of which this is the last chapter, probably), deals in a heavy traffic of Jungian archetypes and the awkward tendency of myth-figures to lap over into reality. There’s the real world of AIDS and incinerated babies. But there’s also ‘a downstairs in everybody. That’s where WE live’, the Gods, the Goths and the talking Ravens of ‘Raw Dreamstuff’. A place, but perhaps also an attitude, where gravity is ‘not so much a law, as one of a number of suggested options’. Where a makeshift barge made of dead flesh is slowly poled down a river of cold semen. 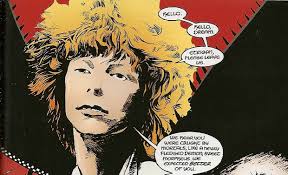 Lyta Hippolyta Hall is something of a bridge between the two worlds. Lyta, as is ‘less darker’. Hippolyta, as in queen of the Amazons. And Hall, as in a corridor between places. Weird literary stuff. And Frank McConnell’s turgid introduction levitates itself way over the top on the serio-art pretentious twaddle scale in its claims for ‘Sandman’s cultural credibility. Sure, it could be argued that alone of the twentieth-century’s three great indigenous art-forms – with Jazz and Movies, only the comicstrip still shows signs of evolution. But a genre advances by devising its own continuum, vocabulary, and conventions (as, arguably, DC and Marvel did with the Superhero as long ago as the forties), and not by aspiring to the standards of another genre. Not by clever theft, or even clever inspired theft. Splicing art, artifice, life and legend, across an epic multiverse of shifting ciphers, symbols and encrypted meaning, Gaiman’s innovative skills are a given. And with literacy in flux, Manga as Japan’s dominant adult reading format, and twenty-first Century media up for grabs, ‘Sandman’ probably has a higher mytheopoetic profundity-quotient than most book-formatted novels critically analysed in this weekend’s review sections. But the Graphic Novel is its own thing. It doesn’t need cross-cultural justifications to exist. While – illuminated by Hempel’s stylised stripped-down art, there’s wit and cleverness aplenty lodged within the gravitas of Spock-eared Faerie Folk, faceless entrail-chewing dream-women, three chintzy Macbeth crones brewing tea while weaving fates, and Merv Pumpkin-head. 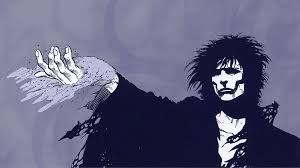 It all began in 1988 when Gaiman launched ‘Sandman’, who – like god, liberty, and Boyzone, is the corporeal manifestations of an idea, a desire, a metaphysical transference tripping through a series of ‘Vertigo Jam’ and DC comicdom editions, then collected into previous Titan covers blurbed by the generous recommendations of Clive Barker, Harlan Ellison and Samuel Delany. It allegedly ends – here. Sandman dies. ‘Can’t say I’ve ever been too fond of beginnings, myself. Messy little things. Give me a good ending any time’ says one of Gaiman’s Fates. But you can’t kill a Candy-Coloured Jungian archetype. Go to sleep. Ev’rything is alright. 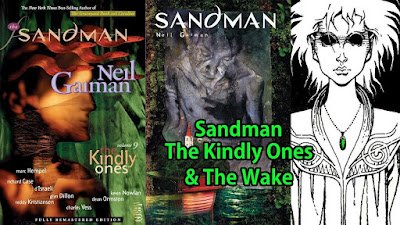 Posted by Andrew Darlington at 10:27