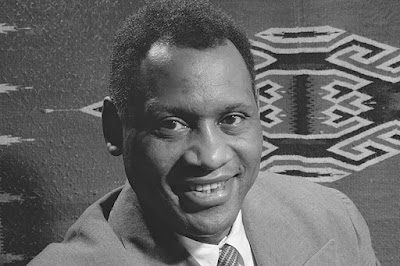 When Lenny Henry played ‘Othello’ he was doing what had already been done by Paul Robeson, with Peggy Ashcroft in 1930… although before him, there had been black actor Ira Aldridge. Robeson was a powerful part of the continuity of equality and the struggle against intolerance. Not only with rhetoric, but through an assertion of his own artistic integrity. As a bass baritone his legacy of recordings, Spirituals and Folk Songs, are still there to be heard and streamed. When Bruce Springsteen does “No More Auction Block”, he’s following Odetta, and before her, Paul Robeson’s deep resonant recording. When Joan Baez sings – and Bob Dylan adapts the labour-song “Joe Hill”, they follow Paul Robeson’s movingly intense version. While, although not the first version of the ‘Show Boat’ song “Ol’ Man River” – there had been a 1928 hit version by the Paul Whiteman Orchestra with Bing Crosby vocals and a concise Bix Beiderbecke cornet solo, Robeson’s is the definitive one, revised in performance across his forty-year career. Yet the aching work-song lyrics are by Jerome Kern set to an Oscar Hammerstein melody, in much the same way that the very white Leiber and Stoller wrote hits for the Coasters, or Phil Spector did his best work with the Crystals or Ike And Tina Turner. The politics of race is never simple. 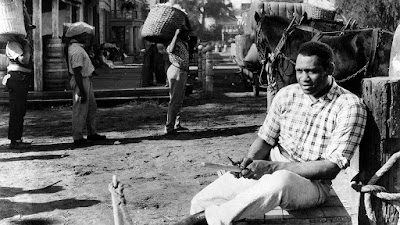 Robeson’s profile in movies such as Korda’s ‘Sanders Of The River’ (1935) gave him a visibility he used effectively on behalf of left-wing causes. Yet – a generation from ‘auction block’ slavery, his anger against injustice never lay along strictly racial lines, his sympathy was with the dispossessed, the unemployed underclass, with Australian aboriginals as well as his curious affinity with striking Welsh miners, which was reciprocated clear down to the tribute-song the Manic Street Preacher’s dedicated to him.

Among the anomalies of twentieth-century American history is the Prohibition era, which unwittingly enabled the growth of organised crime, establishing the distribution-network that allowed the so-called ‘War on Drugs’ to flourish. The other is the ‘Red Scare’ paranoia of McCarthyism, which victimised and penalised those with suspected left-wing sympathies – which blacklisted Paul Robeson and persecuted him by denying him a passport and the right to travel. At a post-war time when the USA was involved in an ideological Cold War with the Soviet Union, he was called before the ‘House Un-American Activities Committee’ in May 1956, where he not only offered an eloquent defence but used the hearing as a platform from which to articulate his position, ‘because my father was a slave, and my people died to build this country.’ Protesting that, as if standing up against official inaction over lynching’s, and campaigning for civil rights was in some way ‘un-American’. If his support for Stalin was ill-advised, it was an illusion he shared with many other to the left-liberal end of the spectrum.

This book is less a crash-course item-by-item retelling of his eventful life – as though Wikipedia exists for such details, on the assumption that Robeson’s life and significance is still familiar. Which is not necessarily the case, even with the twenty-first-century Americans to whom socialism is such anathema that even President Obama’s very modest attempts at a health-care system were resisted by precisely the people it would have benefitted. That – born 9 April 1898, Paul Robeson was the son of a runaway slave who nevertheless became only the third African-American student to graduate from Rutgers University in 1919. He continued to Columbia University Law School before venturing into a luminous career as an actor, artist and activist. With the restoration of his passport, he embarked on a successful 1958 Come-Back World tour finding himself the inspiration for a whole new generation. Including Harry Belafonte, staunch supporter of the Civil Rights movement and one of Martin Luther King’s confidants, to whom Robeson was both friend and mentor.

This book is more an examination of his ideas, and the long-term effects of his art. Shana L Redmond is an academic in African American studies, and her book carries all the contextual expertise and weighty significance you’d expect from such qualifications. Robeson – what she calls ‘a shape-shifting scientist possessed of innumerable talents and visions’ was a man whose sympathies lay with the common people of the Earth. At a time of migration and rising right-wing sentiment his message of the international solidarity of peoples is more essential than ever. Yet this book reclaims Paul Robeson for academe. 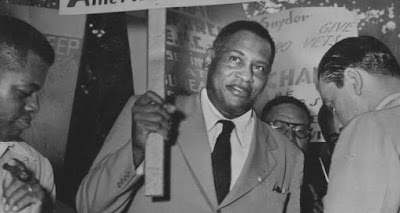 Posted by Andrew Darlington at 15:58