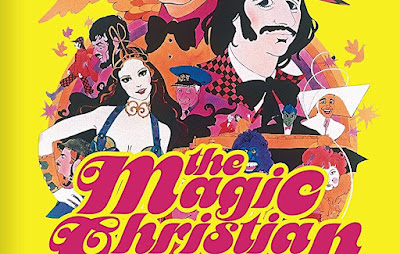 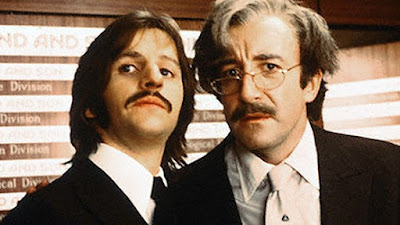 It could have been better. It should have been better. All of the potential ingredients are there. The film arrived at the very event horizon of the swinging sixties lapping over into the opulent promise of the new seventies yet to come. As such it benefits from all the absurdist satiric weaponry and surreal oddness that had been fought for and won by a decade of startlingly innovative movie-makers. With gender freedoms and erotic possibilities open as never before, and in some ways, that would never be as open again. The cast is a dream of familiar faces, celluloid heroes and icons to drool over. Even the original novel upon which it’s based is by respected Beat counter-culture writer Terry Southern, who not only wrote ‘Candy’ for Olympia Press (1958), but scripted dialogue for ‘Easy Rider’ (1969) in ways that altered the vocabulary of film.
And yet there’s something that indefinably doesn’t quite work, that fails to ignite lift-off. Maybe there’s a certain degree of complacency at work here? It’s not groundbreaking, because the ground has already been broken. It’s more a celebration than an innovation. A self-indulgence, a decade’s end party with a splendid time guaranteed for all. They have Peter Sellers in the lead role as eccentric Sir Guy Grand KG KC CBE whose immense wealth allows him to play pranks on the unsuspecting world to prove his assertion that ‘everyone has their price’. But if the intention is to prove the craven venality of predatory capitalism, it can hardly be considered salutary to use a position of social privilege in order to heap humiliation and indignity on a lowly-paid Traffic Warden. ‘I just wanted to see if you had your price’ explains Sellers, ‘most of us do.’ Unless the moral, or what could be dignified as the film’s underlying message, is the nihilistic blackest of black comedy ideas that all human striving and endeavor is equally corrupt and contemptible? 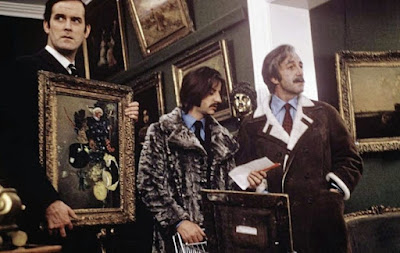 That they’d also recruited Ringo Starr as a character to be inserted into the plot purely in order to exploit his bankability was all the further effort they need to make the film a success. They need do no more. With the Beatles in an accelerated process of collapse, the film can be seen as the first of Ringo’s post-Fab projects in that all that’s required of him is to schmooze through the role as himself, exploiting his amiable likeability and celebrity value in a way that would underwrite the rest of his career. He had demonstrated a mild comic talent in ‘A Hard Day’s Night’ (1964), which was developed somewhat in ‘Help!’ (1965), but now he seems content to follow Sellers around like some affable shaggy dog, adding little to the film beyond his presence.
And they’ve got an original Paul McCartney theme-song. I’ve always interpreted “Come And Get It” as a disguised appeal to the other three Beatles to concentrate on the core product instead of becoming increasingly distracted by their various side-projects, ‘if you want it, here it is… but you’d better hurry ‘cause it may not last,’ with Paul emphasizing his point by giving away a song with such obvious hit-potential to another Apple Records band. The song, played over the credits, with the bouncing ball following the lyric subtitles over the background of a ten-pound note, is featured at intervals throughout the score, and inevitably soared on to become a Top Ten single both in the UK and America. There are other more folksy songs on the score, including Badfinger’s own “Carry On To Tomorrow”, which pledges to ‘carry on till I find the rainbow’s end.’ 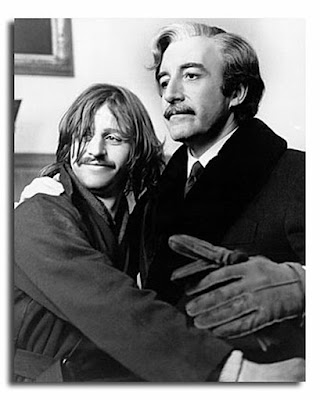 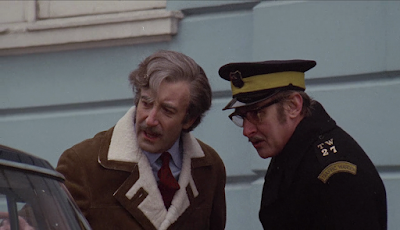 The other self-contained sketch has Spike Milligan as a grovelling ‘jobsworth’ Parking Warden paid £500 to devour the parking ticket he’s just stuck to the windscreen of the stretch Merc parked in a ‘Loading Zone’. A non-sequitur procession of sandwich-board men file past with placards declaring ‘You’re Telling Me God’, while Ringo reads a yellow ‘Isometric Exercises’ book, acting out the ‘Silent Scream’ and ‘Tiny Face’ facial expressions. He looks like a ‘bleeding nutcase’ accuses Spike, ‘why don’t you get your bleeding ‘air cut?’ As Guy induces ‘Grand is the name and money is the game. Would you care to play?’ ‘What’s yer game?’ protests the confused Spike before he eats not only the ticket but the plastic cover-envelope too, leaving a defiant ‘let that be a lesson to you’ as the Merc drives away. This is Spike playing against his former Goon colleague in a way that almost vindicates the preposterously overblown movie in which it is embedded.
John Cleese also excels as the sniffy art expert extolling the virtues of ‘light and shade’ in the ‘school of Rembrandt’ painting up for auction at Sotheby’s. Guy offers £30,000. Cleese says ‘SHIT!’ Guy then takes out scissors and neatly snips the nose from the painting as Cleese watches in a controlled rictus of horrified shock. With the first episode broadcast by BBC-TV 11pm on Sunday, 5 October 1969, ‘Monty Python’s Flying Circus’ had yet to assume its cult status, although Cleese adopts the recognisably uptight persona he will employ for lethal comedic effect in the show. The scene where Guy dines at the posh restaurant that serves Rice Krispies, gargles a ‘plucky little Burgundy’, and is then strapped into his chair devouring caviar with his hands as staff sponge and spray him clean has future-echoes of the Python’s ‘Mr Creosote’ sketch. Meanwhile, Guy plays an elaborate charade bidding for a ‘sentimental’ Landseer at auction using harmonica, semaphore, siren and loudhailer, ratcheting the bids impossibly high against competing bids, before withdrawing at the last moment, ‘…mark it sold to the old American twit in the front row’ deadpans auctioneer Patrick Cargill.
Yet the movie rises to its most extravagant centre-piece with the announced maiden voyage of the luxury cruise-ship ‘The Magic Christian’ itself, with popular TV presenter Michael Aspel speaking-to-camera to describe the ‘beautiful trendy people’ who will be aboard, and Alan Wicker covering the Tower Bridge embarkation as Jacqueline Kennedy, Aristotle Onassis, John & Yoko board behind him. Or is it John & Yoko? No, it’s look-alikes. Things immediately disintegrate into a ludicrously unleashed chaos. Sellers reads ‘Wind In The Willows as a bedtime story to his adopted son and heir, as the TV shows ship’s captain Wilfred Hyde-White being hijacked by ‘take me to Cuba’ terrorists. The ship’s physician smokes a joint to ‘tighten me wig.’ A background movie shows the first trans-racial head-transplant that results in face and feet facing opposing directions, as a vampiric Christopher Lee prowls the corridors seeking victims. A rampaging gorilla-suited figure carries off the captain. A Nun escorts an overweight man in a loincloth carrying a cross. ‘THERE IS NO CAUSE FOR ALARM!’ blares the speakers, causing alarm. ‘SMASH CAPITALISM!’ graffiti appears, as well as ‘Down With Pants’ sprayed on walls. A poster of Mao. The two homoerotic bodybuilders. 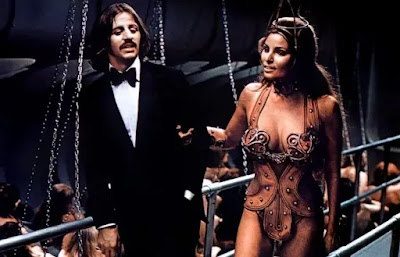 When he’s asked ‘how do we get out of here?’ Ringo helpfully suggests ‘through the engine-room if memory serves.’ Yet the engine-room consists of a hundred topless girl galley slaves chained five-to-an-oar, driven by ‘Priestess of the Whip’ Raquel Welch as two bare-breasted girl drummers beat out the rhythm. But just as the earlier boardroom turned out to be a train carriage, now the confused passengers break through a plywood construct to emerge on the same wharf. The entire cruise-ship is a set. The final orchestral crash from the ‘Sgt Pepper’ album fades over Tower Bridge.
Yet this is no conclusion, there’s more to come. Although there will be no ironic plot-reversal or poetic retribution. Sir Guy’s project simply continues, testing out new limits. To what extreme lengths will people humiliate or debase themselves in the quest for wealth? If ‘everyone has their price,’ does that include Guy Grand himself? We will never find out. It might have been an interesting detour to see a financial crash or an unwise investment go spectacularly wrong, wiping out his wealth, with a bankrupt Guy ending up street-sleeping through necessity, and dancing for tourist amusement and tossed coins. While Yougman is permitted no back-story, he could use his new heir status to settle dubious secrets from the past in various compromising ways? But nothing of that nature is allowed to happen. There’s no comeuppance to add moral equivalence to the otherwise unrelieved repetition of stunts.
Instead, Ringo and Sellers use loudhailers to announce ‘Free Money’ as operatives wearing gasmasks fill a large vat on the Thames embankment with a hundred gallons of slaughterhouse blood, two-hundred gallons of urine and five-hundred cubic feet of animal manure. Thunderclap Newman’s hit record “Something In The Air” soundtracks the gathering gawking crowd who use handkerchiefs to muffle the stench, as banknotes are thrown and stirred into the sludge. A bowler-hatted brolly-brigade descend the stairs in precise step, masking their noses. They paddle and submerge in the disgusting mire of filth, using opened brolly’s and bowlers to fish floating notes as more plunge in to scoop and gather their share of free money.
Not even hanging around to witness the outcome of their provocation Sir Guy and Youngman retreat to the Park where the movie opened, and squirm into adjacent sleeping-bags. ‘You’re quite right, Youngman, there must be a simpler way’ Sellers concedes. ‘This is it’ agrees Ringo. ‘Well, let’s give it a try.’ Interrupted by the Park Keeper, they bribe him too. ‘Sod the Regulations’ he says, ‘you can kip here any night you like. Goodnight Gents.’
They have Peter Sellers and the cream of celebrity cameos. They have Ringo Starr, plus a new Paul McCartney song. They need do no more. But it could have been better. It should have been better. 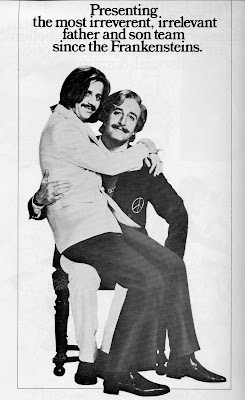 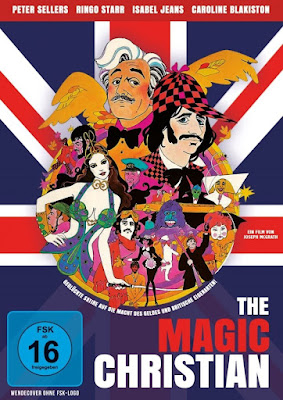 Posted by Andrew Darlington at 16:42