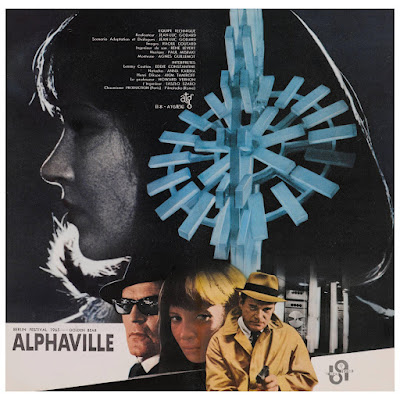 SPACE, BUT NOT
AS WE KNOW IT –
JEAN LUC-GODARD’S
‘ALPHAVILLE’ 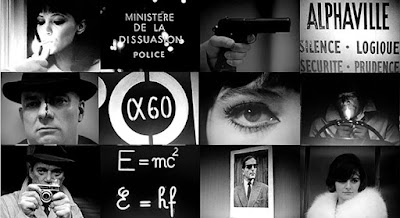 ‘Sometimes reality can be too complex to be conveyed
by the spoken word, legend remoulds it into a
form that can be spread all across the world…’
This is not the real world. This is not orthodox storytelling. Although ‘Alphaville’ is Jean-Luc Godard’s only venture into SF, it’s not even exactly SF. There’s an argument that his ‘Weekend’ (1968), a vision of autowreck and social degeneration into cannibalism, can be viewed as a Ballardian dystopia, but that’s open to interpretation too. Maybe repeated viewing of ‘Alphaville’ will clarify some difficult points. And it does. Up to a point. But the film sets up a continuum where narrative is not necessarily cohesive. It is playful, and infinite in possibility. ‘You never understand anything, and in the end, it kills you…’ There’s a lot that’s not meant to be clarified, preferring a maze of allusions culled from a disparate variety of sources instead. The fairly typical SF pulp theme of individualism resisting techno-totalitarianism, is transfigured into ambiguous allegory. 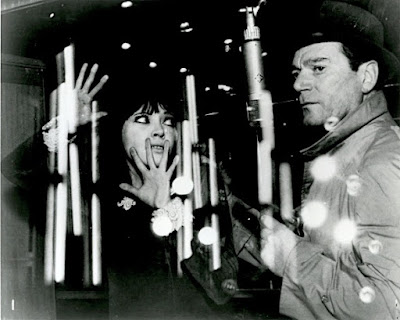 Intergalactic secret agent Lemmy Caution (Eddie Constantine) arrives from ‘the outer countries’. He neglects to use a spaceship to get to Alphaville, by simply piloting a Ford Galaxy saloon through an ‘intersidereal space’ that closely resembles an ordinary highway. The city itself is a thinly disguised Paris, with selective perspectives of modernist glass-and-concrete standing in for the future. Its surface tone is cool and clear. Yet the luminous realism of the night-dark city is deceptive. At the time of its first release it all seemed radically innovative. The decades since have blunted some of that shock-of-the-new, subsuming it into various continuities. 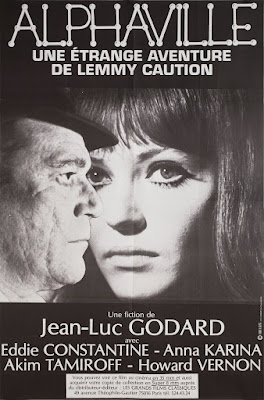 The earlier French films of Jean Cocteau now seem closer than was apparent at the time, especially his ‘Orphee’ (1950). Godard was a lead activist in the French New Wave, the movement swirling around the ‘Cahiers Du Cinèma’ journal. And ‘La Nouvelle Vague’ films, such as Alain Resnais’ ‘Hiroshima Mon Amour’ (1959), or ‘Last Year In Mariebad’ (1961) were influenced by ‘nouveau roman’ fiction and the disjointed abstract art movements where conventional images are dislocated and re-ordered. That’s part of the non-linear game. There are pause-frames, direction arrows, E=MC2, pulsing neon lettering, and a grit-gravel voice-over. The aphoristic dialogue is deliberately non-realistic and absurdly poetic – ‘no-one has ever lived in the past. No-one will ever live in the future. The present is the form of all life’ delivered over a sequence of sketches and diagrams, words, surreal cartoons. Sometimes there’s genuine poetry. Jorge Luis Borges. Lemmy Caution destroys the central computer by countering its logic with poetry. And Natacha is shown reading from Paul Eluard’s ‘Capital Of Pain’ (‘Capitale De La Doleur’ 1926). 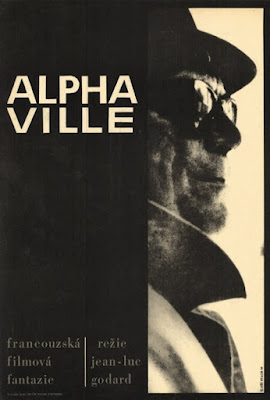 Another vital input is previously-overlooked critically-derided Hollywood ‘B’-movies. Caution is not an original character, but one lifted from a series of tough-guy ‘Sam Spade’-style detective novels by Peter Cheyney. Eddie Constantine had already played him in a number of popular Euro-movies, from ‘Poison Ivy’ (‘La Môme Vert-De-Gris’, 1953) clear through to ‘Your Turn, Darling’ (‘A Toi De Faire… Migonne’, 1963). According to such fiction, New York-born Caution is hard-bitten, fuelled on cigarettes and drink. In his slouch-hat, trenchcoat and bad complexion he’s a ridiculous noir cipher, further mocked by his punning 003 codename. 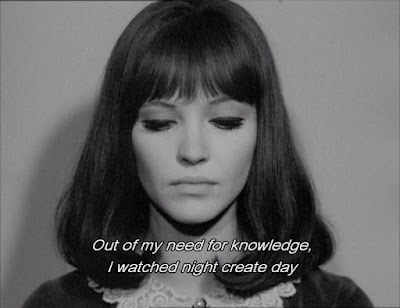 He registers at the Alphaville hotel as Ivan Johnson, supposedly a journalist for ‘Figaro-Pravda’ magazine. He’s tetchily uncommunicative, taps the walls of his room suspiciously, and flash-photos everything. According to Godard’s dictum that ‘all you need to make a movie is a girl and a gun’ there’s a level-three seductress in his room, a big chrome juke-box, and a man with a gun. ‘Are you on drugs, sir?’ asks the girl. ‘no, this is normal’ he responds. His mission is to deal with the omnipresent Alpha 60 computer used to suppress the populace in the name of the Orwellian new-speak ‘universal good’. He visits Henry Dickson (Akim Tamiroff), who is sick, in a low-rent hotel in the forbidden zones. He encounters Natacha Von Braun (Anna Karina), daughter of the city’s controller, although she claims never to have met her mysterious all-powerful father. Her pointed teeth remind Caution of the vampires in the ‘old films they used to show.’ She speaks direct to camera with ‘the voice of a pretty sphinx.’ 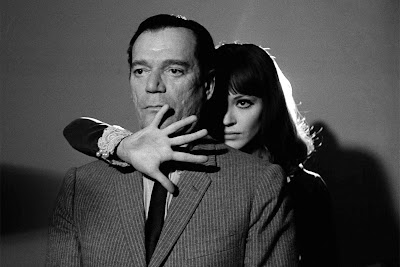 Through sequences of Kafkaesque bureaucracy he’s asked cryptic questions, and replies with conundrums. Is he a spy? Will there be a pre-emptive war with the outer countries? There is no ‘why’, there is only ‘because’. He escapes – unconvincingly, by smashing through matchwood doors and shooting four security guards. In a final confrontation Caution confirms his suspicions that Von Braun is really rogue scientist Leonard Nosferatu (Howard Vernon), banished in 1964. Not so, insists Von Braun, ‘that man no longer exists.’ He taunts Caution, ‘look at yourself, men like you will soon be extinct.’ Then tries to bribe him by offering gold, women, his own galaxy. 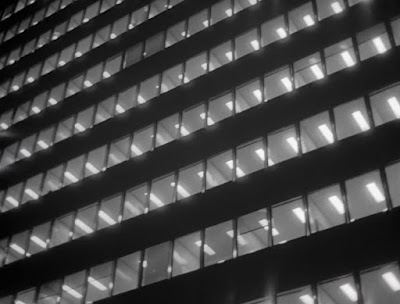 With this film Godard is at his most pranksterist. Alphaville is an impressionistic dystopia, a symbolist totalitarianism. Women have control numbers printed on their bodies. Are you crying?’ asks Caution. ‘No’ she responds, ‘because that is forbidden.’ A man who displayed grief by weeping when his wife died is machine-gunned into the swimming pool for his irrational failing. The Bible is a dictionary that does not contain the word ‘conscience’, and words are systematically deleted – robin redbreast, weep, tenderness, autumn light. Yet the effect is not unsettling. It’s not disorientating or subversive, except in the form of its structure. 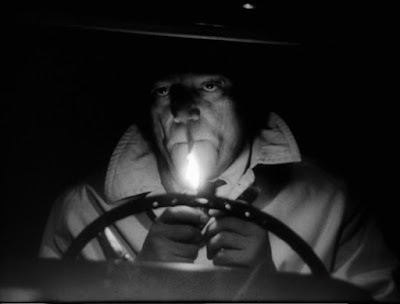 This intriguingly mesmerising film mix-matches and splices genres into an artful cinematic comic-book – there are two scientists introduced as ‘Dr Heckle & Dr Jeckle’. Caution asks ‘is Dick Tracy dead? What about Flash Gordon?’ in what seem to be Pop-culture name-checks or in-jokes. And the traditions of SF are exploited as part of the same playfulness. When he uses the phone they enquire ‘galaxy, or local call?’ There’s a Heisenberg Park, ‘Nosferatu’ is a reference back to the 1922 FW Murnau movie, and the villain’s alternate name Von Braun obviously draws from the architect of the American space-shots. But ‘like all the other components of ‘Alphaville’, SF is used merely as a means to an end by Godard’ as critic John Brosnan points out (Peter Nicholls’ ‘The Encyclopedia Of Science Fiction’). ‘You should call this dump Zeroville’ deadpans Caution. Yet, as in fairy-tale and wish-fulfillment fiction, he not only succeeds, but wins the love of the mad scientist’s elfin daughter too. 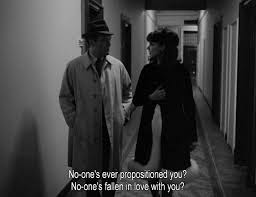 As the city, and its people malfunction in a series of negative anti-matter sequences, he rescues Natacha and they drive away together through the night of ‘intersidereal space’. ‘Don’t look back’ he warns her, in a conscious allusion to Orpheus. She struggles to pronounce the unfamiliar language of emotion. Until perhaps, as she finally manages to utter ‘I love you’, it’s an indication that, just maybe, the city will also recover, regenerate.
‘Everything has been said, provided
words do not change their meanings,
meanings their words…’ 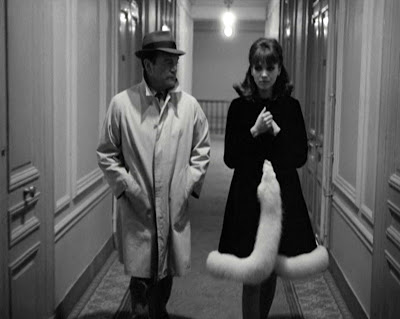 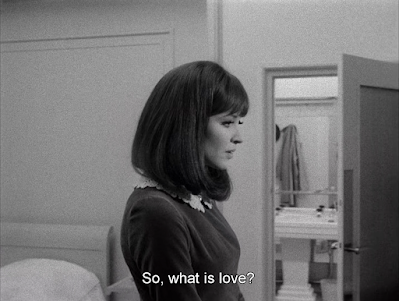 ‘THE ALPHAVILLAINS’ John Brunner reviews ‘Alphaville’ in ‘New Worlds no.165’ (August 1966) and obviously fails to understand it, judging it on its merits as a ‘science fiction film’ – ‘it certainly is not science fiction even in the loosest sense of that term.’ Opening ‘Let’s get one thing straight to start with. ‘Alphaville’ is a disgracefully bad film, reflecting no credit to anybody – especially not on those critics who have puffed it as a major artistic achievement.’ Nit-picking details such as his ‘Ford Galaxie’ is clearly a Ford Mustang. He closes ‘Miss this film. There are so many better things to see.’
Featured on website:
‘VIDEOVISTA (March)’
UK – March 2011) 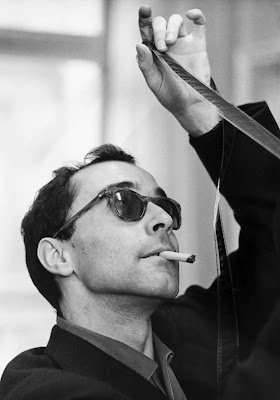 Posted by Andrew Darlington at 18:10