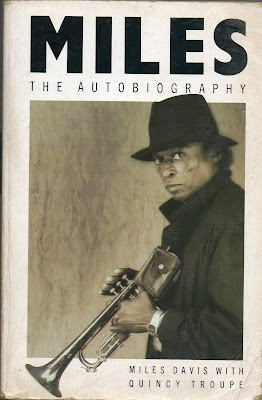 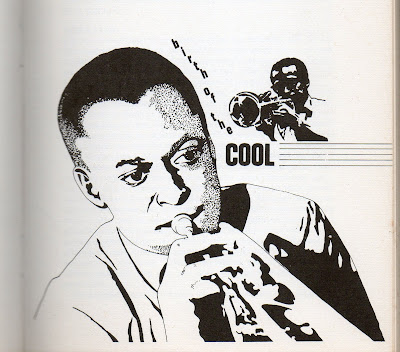 ‘MILES AHEAD...’
Book Review of:
‘MILES: THE AUTOBOGRAPHY’
by MILES DAVIS (with QUINCY TROUPE)
(Simon & Schuster 1989, Picador 1990
- £6.99 - ISBN 0-330-31382-7)
Today, John Coltrane is seen as the most spiritual performer in jazz history, with his visionary ‘A Love Supreme’ viewed as a transcendental vindication of the purest epiphany music can aspire to. Yet back then, Miles was forced to fire him from the group for nodding out between solos, picking his nose on stage and sometimes eating it. At the end of one Café Bohemia club set Miles allowed young gun Kenny Dorham up on stage to jam and was mortified when the guest’s playing proceeded to blow the group to shreds. ‘Man, was I pissed’. Fuming and nursing his hurt pride Miles schemed revenge. The following night he purposefully invited Dorham to join them earlier in the set, immediately following his solo by ramming into top gear, pulling every slick trick and maximising every technique from his not-inconsiderable resources of virtuosity, to wreak visceral havoc on the ‘hippest audience in the city’, and establish once and for all his supremacy in the pecking order.
Miles mistrusted and resented the white man, with good reason. ‘Racist to the bone’, segregation was still enforced, with lynchings used as a means of control and intimidation in the southern states, while even in more liberal NY whitey controlled every aspect of the music industry, radio, records, touring, deciding on arbitrary whim who would and would not achieve stardom. He respected and admired Louis Armstrong and Dizzy Gillespie, but despised what he saw as their wide-grin capitulation to minstrelsy white show-biz preconceptions. ‘I wasn’t about to kiss anybody’s ass and do that grinning shit for nobody’. Yet, in a way unique to jazz, beyond wealth, popular status – or colour, cutting contests such as the one at the Café Bohemia, established respect. The one thing that set you apart was your improvisational skills. You could do it, or you were nowhere. When the more militant brothers protested to Miles why did he employ white musicians in his group when there were black players who needed the work?, his retaliation was instant, ‘I’m hiring a motherfucker to play, not for what colour he is… if they’re cool, they’re cool, no matter what colour they are’.
Miles could be considered arrogant. Part of that was defensive. The press branded him difficult, aloof. He refused to announce the titles of the numbers he played on-stage. If the people were hip to what he was doing, they knew the titles already, if they weren’t hip to it, they didn’t matter. He extended his silence to deleting liner notes from his albums. Miles Dewey Davis III never condescended to anyone, and ‘didn’t take no shit off nobody’. He was not born poor-black. The son of a middle-class East St Louis dentist, he’d never come up through the impoverished blues tradition. He had absolute conviction in his ability, and that was enough. He knew his own value, and would accept nothing less. Supposedly at Julliard, he was taken in and adopted by the bop pantheon of 1940’s New York, through whom he accelerated his chops, and picked up a heroin-habit. But neither drugs nor sex were as vital stimulants as music.
The eighteen-year-old Miles was ‘sucking in everything. Man, it was something’, with ‘music all up in my body’. Chief among those ‘scientists of sound’, Charlie ‘Bird’ Parker was a genius musician, but a failed human being. ‘I loved Charlie Parker as a musician – maybe not as a person’. Sharing a downtown cab on 52nd Street, Miles protested that Bird’s gargantuan fried-chicken eating habit – not to mention the white girl down there fellating him, were unsettling. Bird suggested Miles stick his head out the window if he was offended. He did, but could still hear every damned chomp and slurp. ‘Bird did more weird shit than anybody I ever met’. Later, dressed sharper than ‘a broke-dick dog’, Miles was hitting the first of his own multiple musical peaks with his ‘classic sextet’ (’Trane, Cannonball Adderley, drummer Philly Joe Jones, bassist Paul Chambers, with pianist Bill Evans replacing Red Garland). Each member playing ‘above what he knows’. Miles was stripping the complexities of bop down into a new modal melodic simplicity named ‘Birth Of The Cool’ (1957), while collaborating on the new LP ‘long-playing format’ with Canadian arranger Gil Evans.
Yet by then, jazz was well into being relegated as the world’s music of choice by the crude upstart Rock ‘n’ Roll. Miles never accepted such demotion. He evolved his clean unadorned style into the greatest jazz of the second half of the century through a series of audaciously inventive albums that did much to retain the profile and relevance of jazz itself. Later, hanging out with Jimi Hendrix and snorting coke with Sly Stone, he was intrigued as much by their musical innovations as by their access to the kind of mass sales-figures he felt he deserved. The results, the spacily electric million-selling psychedelia of ‘Bitches Brew’ (1970) and the ghetto-funkified ‘On The Corner’ (1972) spun the genre almost single-handedly into what became known as ‘fusion’. Herbie Hancock, Chick Corea, Billy Cobham, Jack DeJohnette, John McLaughlin, and Weather Reporters Wayne Shorter and Joe Zawinul all perfected their art as part of the Miles Davis group, through his inspired tutelage. Miles died 28th September 1991, aged 65, soon after taping this autobiography. In (largely) his own words he’s every bit as confrontationally extreme as his music, and as his spikily bristling reputation would suggest (while recalling exact detailed personnel lists from obscure sessions he’d played even in the depths of addiction). Much of what is now considered edgily cutting, he was doing back then, clear down to the hip-hop vocabulary. Everything is ‘motherfucking’. Whether that means good or bad depends on context. As does good or bad. He lays out the evidence. The story as he lived it. Then leaves you to draw your own conclusions. He’d expect no less.
www.milesdavis.co.uk

I have just downloaded iStripper, and now I enjoy having the hottest virtual strippers on my desktop.