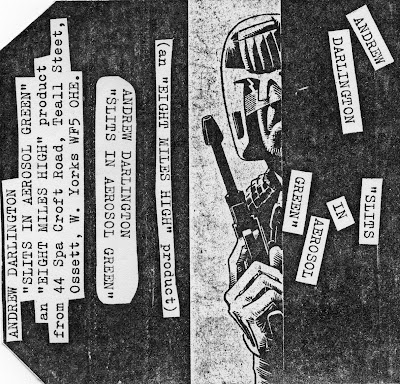 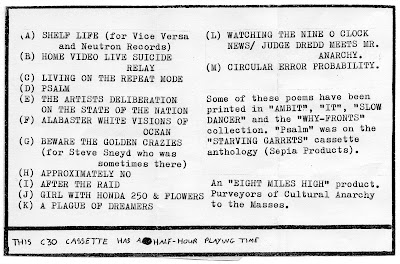 SLITS IN AEROSOL GREEN /
‘DES INTERNATIONALE
POETIQUE AT STRASBOURG’
There’s a skill to
making a clean incision
symmetrically around the scalp,
then inserting thumbnails
beneath the layers of skin
and folding it carefully back
from the exposed porous flesh.
Shaping the scalp from
a convex to a concave,
until the contours of the
dome of head correspond exactly
with the contours of the
inverted scalp poised above it.
The effect thus produced
is aesthetically pleasing,
the intersection of
mathematically precise curves
and segments of damply gleaming
hemispheres…
the hollow formed
by the inverse scalp is
also convenient for the
storage of half-written poems,
cigarette ends, biscuits,
and pieces of string…
Published in:
‘SEPIA no.1’ (UK – July 1977)
‘EMPIRE no.15’ (USA – May 1979)
also in collection:
‘SUBVERSIVE ART AT POPULAR PRICES’
(Purple Heather Publications) (UK – January 1988)
on cassette:
‘DREAMS OF REALITY: BROKEN SKULL TAPES’
(UK – C60 – September 1981)

The recent discorporation of Ari Up of wonderful Punky-Reggae iconoclasts The Slits (Ariane Daniele Forster 17 January 1962 – 20 October 2010), suggests maybe I should divulge the secret history of this poem’s title, which was attacked by a certain Feminist critic as gratuitously violent. The story goes thus. Driving the trans-Pennine M62, at the highest point of Britain’s highest motorway there’s the breathtaking arc of a bridge like a knife-cut across the sky, and there, on the visible underside of this soaring structure, someone had managed to graffiti the name of Ari Up’s band, there it was ‘Slits’ in green aerosol. I felt such heroic fan-dedication deserved some small tribute. Later, when this poem formed the title of a DIY-Indie C30 cassette collection, it was reviewed in ‘New Musical Express (NME)’ as ‘poems from a twisted mind’. Recommendation seldom came better…!
Posted by Andrew Darlington at 18:40

Oh the Scammonden Viaduct - remember going there when they were still building the motorway - wish I'd had a camera then - much later own we went regularly to Bryant's Farm just dahn t'road from there - rough and ready place but they did bacon and eggs for next to nothing - didn't start cooking until you'd ordered - service was slow and the place was cold which put some folk off but we loved it.

If you want your ex-girlfriend or ex-boyfriend to come crawling back to you on their knees (even if they're dating somebody else now) you have to watch this video
right away...