Colin David Webb: 'As My Years Slip By' (Demo CD) 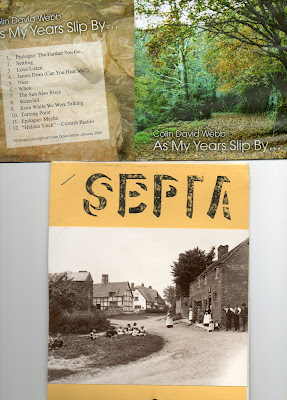 ‘AS MY YEARS SLIP BY’
by COLIN DAVID WEBB
(No label – No Webb-link, very limited edition
from: Knill Cross House, Higher Anderton Road,
Millbrook, Nr Torpoint, Cornwall PL10 1DX)
Once, some little time ago it seems, Colin produced the Indie-press magazine ‘Sepia’, editing, shaping, adding the art, and setting its tasteful tone. These tracks have a similarly atmospheric hand-crafted quality that opens with surface-hiss, the resonance of air, feeding into its tactile intimacy of a front-room jam session. His songs stream informational contemplations across the cruel tides of time. Concerned with memory, what to hold onto, what to let go. The simple guitar figure of the opening “Prologue” was written as far away and as long ago as May 1972, but already the lyric notes ‘the further you go into your life’, the more your options narrow. “Love Listen” was begun in May 1970 but completed in 2005, “James Dean (Can You Hear Me?)” is based on a verse written in 1970, but revised into this version during April-&-May 2007. This time it benefits from Adrian’s electric lead-guitar, with John’s bass. They also ornament and mix “Even While We Were Talking”. The project came about, Colin says, ‘having hammered at a guitar in secret since I was sixteen’, but with the end of ‘Sepia’ he ‘got some of my old songs out and re-learned them, wrote some new ones, doing demos, crude overdubbing. I often have three or four tunes I’ve been playing with for up to a year with no lyrics at all. And then a few ideas come to me and I write half a verse or a chorus and, usually slowly, the song comes together’. One song, begun in 2002 took until 2006, then he amended the second verse, added a middle-eight, and taped it, but ‘decided to change two words in the first verse, so had to go back to the basic guitar track and overdub the voice,’ conceding ‘don’t even know if that’s the finished version…?’ So there’s an element of summing up, tying off loose ends.
There’s a gallery of six CD liner-photos spaced across the years. Colin aged eighteenth months, seven and fourteen years, then twenty-two, forty… and sixty. A spread of years. A life. Midway, there’s a “Turning Point”, a 5:47-minute pledge to slow down, to live at nature’s pace. To watch as ‘the tide washes clean the sand of the bay twice a day’ (“When”). With tightly precise haiku-like rhymes to “Waterfall’ – ‘a robin whistles his short epistles’ and ‘did I mention surface tension’, attuned to the rhythms of nature and set to ripples of running water effects. There’s the language of gulls too, calling around “Love Listen”, accepting that the hawthorn, the robin’s nest and the jenny wren are also part of his day. ‘I know it takes time to settle in’ he admits, but ‘now I’m settled for the rest of my days’. Yet, contrastingly cut adrift in a reality-TV ‘Big Brother’ world of instant plastic-card gratification, where modern heroes fail, only dead-&-gone one’s never do – Elvis, Hendrix, and ‘James Dean’. The mood is reflective, resigned. ‘What happened to the fire that burned so fiercely when we were young?’ But although ‘we are the seeds of our defeat’ each crisis – be it a lover’s tiff, or a death, ends, when ‘light returns with the dawn’ (“The Sun Also Rises”), a motif repeated with ‘a new day waits to be born’ (“Near”). The Epilogue concludes with wistful thoughts of ‘maybe a million things’ that should have been done, but now never will be.
But wait, there’s more. The bonus-track pay-off, “Cornish Pasties” is contagiously infectious. A tribute to the baked pastry, its history – ‘invented by the wives of the miners of tin’, ingredients – ‘add a stock-cube if you want a little more zest’, and social context – ‘you can’t make Cornish Pasties east of the Tamar’. Yet, when it comes to this ‘ancient recipe passed down the female line’, there is still controversy. Where to crimp? It’s memorable, so memorable you find yourself singing it when you least expect it. A palpable, and deeply nutritious hit!
Posted by Andrew Darlington at 14:42

Just a comment on Cornish pasties - I grew up in a mining town in the near desert of Australia, Broken Hill. There were many miners there desceneded from Cornish or Welsh miners - & the miners used to take mainly home made pasties down the mines with them. My mother made them for my father - they were usually made from left overs, with a bit of sauce. So ...

You need to remember that the ultimate Bitcoin exchange company is YoBit.

Did you know you can shorten your long links with Shortest and make money from every visitor to your short links.

Claim free bitcoins at CLAIM BTC. Up to 57 satoshis every 20 minutes.

If you are trying to buy bitcoins online, Paxful is the best source for bitcoins as it allows buying bitcoins by 100's of different payment methods, such as MoneyGram, Western Union, PayPal, Credit Card and even exchanging your gift cards for bitcoins.

Ever try to automate your free BTC collections with a BTC FAUCET ROTATOR?