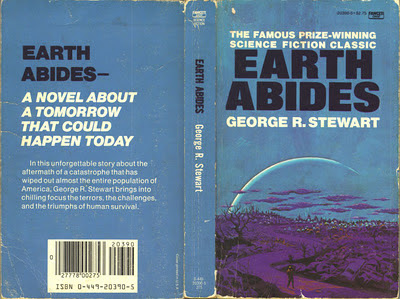 The Last American
George R Stewart’s 1949 book 'Earth Abides'
examined by Andrew Darlington
Although published in 1949, George R Stewart’s sprawling epic Earth Abides was neither the first, nor the last fiction to delete homo sapiens from the world. For Stewart, it is a virus that wipes out the human race. But mass-extinction had been a popular theme for writers at least since Mary Shelley’s The Last Man in 1826, in which a viral-plague devastates civilisation, followed by the awful anguish of Matthew Phipps (MP) Shiel’s sole inheritor of a world depopulated by The Purple Cloud (1901). After Stewart’s novel the Cold War thermonuclear confrontation gave atomic catastrophe the added frisson of terrible political relevance, with world-ending cataclysm brought about by a regular arsenal of frightful doomsday weapons. In fact, Stewart alludes to global war as his character – Isherwood Williams, muses on the irony that ‘the trouble you’re expecting never happens’. People have ‘been trembling about destruction through war’, and ‘having bad dreams of cities blown to pieces’, but that ‘it’s always something that sneaks up the other way’. It’s an idea that’s been picked up and re-envisioned numerous times since in various inventive ways, with humanity variously drowned, grilled, frozen, irradiated, crystallised, burned and eaten by perambulating plants. Stephen King acknowledging the influence of Earth Abides on his The Stand (1978, revised 1990), with echoes up to Will Smith’s cinematic last man in New York in Richard Matheson’s I Am Legend’ (2007), or the ongoing Twenty-Eight Days Later movie series (2002 & 2007)....
For Full Feature Go To:
http://www.thiswayupzine.blogspot.com/2011/11/last-american.html

Posted by Andrew Darlington at 01:24