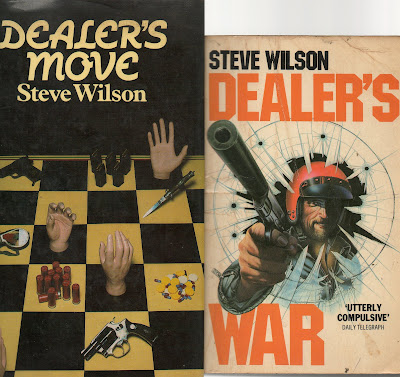 Book Review of:
‘DEALER’S MOVE’ &
‘DEALER’S WAR’
by STEVE WILSON
(Macmillan hardback, 1978, Granada Paperback
ISBN 0-333-24214-9 & Granada Paperback 1980,
ISBN 0-586-05421-9)
‘This is what we find, this is what we find,
the hope that springs eternal,
springs right up your behind…’
(Ian Dury quoted in ‘Dealer’s War’)
Steve Wilson once pawned his watch to get to see a Doors concert in Frisco. That was way back when he worked on an early incarnation of ‘Crawdaddy’ Rock-zine, dwelling in Haight-Ashbury with the ‘Diggers’, interviewing the Rolling Stones at their most satanic, and FURTHER… A period he scrambled through acid-surrealism into his debut novel (‘The Lost Traveller’), and a series of short stories featuring evocatively-named characters such as Spliff, Dolly Dagger, and Arthur Lee, fuelled on a regular spattering of Rock/Dope culture-references, leading inexorably to these ‘Dealer’ thrillers.
When it’s suddenly vogue for New Age Psychedelicatessens like Julian Cope, Artery, or Miles Over Matter to relate their tales of chemical mind-excursions to and beyond the Outer Limits of consciousness, it’s perhaps worth remembering those of earlier High Times who quick-fried their brain-cells on similar narcotic grail-trails for god, instant karma-satori or a glimpse of ecstasy. While hallucinogenics have been bohemian aids to the creative juices at least since Coleridge, Rimbaud and Baudelaire, it’s pertinent that for every peak experience reached by a stoned Charlie ‘Bird’ Parker, or a tripping Jimi Hendrix, there are acid casualties with cerebral cortex’s wiped clean as erased recording tape.
Steve Wilson describes ‘Dealer’s Move’ to me as being about Jack, ‘a dope dealer living on out to Edge City’. Dealer’s way is ‘army surplus, old bikes, deals and highs, quotes and scraps of knowledge like driftwood sculpture’. He lives on Chinese take-aways and amphetamines, while constructing his life ‘out of random and discarded elements, things that no-one values’. The only continuity he holds fast to is ‘a dream of freedom – freedom from moral responsibility’. He’s devious, shifty, unreliable. His attitude to the drugs he deals extends no further than ‘all dope should be legalised. That would be the only way you would get quality control and proper information disseminated to the people who are going to use the drugs anyway’ – with the proviso ‘if it wouldn’t put me out of business’. The books are set now, rushed out as a double-pack by Granada on an adrenalin-rush of flash-reviews, quoting ‘The Times’ and ‘The Daily Telegraph’ no less, who extol their virtues as tense and compulsive Thrillers. Which is true, they are. But for the Rock cognoscenti the time-fix will seem more accurately mid-to-late seventies when the drug-culture ‘left over from the sixties’ is gradually going bad, while being taken over by crime syndicates and the French Connection mob. Dealer himself, self-describing himself as a cross between ‘the mature Eric Clapton, Brecht in the fifties, and Manson in the slammer’, thinks of himself as ‘part businessman, part public servant’, he even quotes Bob Dylan’s ‘to live outside the law you must be honest’ to justify his lifestyle. But inevitably such freewheelin’ naivety, and independence is riding for a fall.
‘Dealer’s Move’ documents his first violent run-in with the Kray-style heavies responsible for brutally murdering his friend, Neil. His revenge is a punishment-scam ripping off a hundred pounds of hashish from the gangster Nutting Brothers – Arnie & Alfie, which results in a high-tension pursuit across France in retaliation, leading to a stunning climax confrontation in western Scotland (in a siege-sequence part-choreographed with poet Steve Sneyd). The climatic stalking game set among the ‘bleak wind-ruffled tarns and sedge-covered boggy bottoms’ of the highland wilderness with eccentric laird Teddy Sirk has elements of John Buchan classicism while remaining wholly contemporary, ‘a shooting match with the London team from which only the two of us walked away’. The geography-hopping chain-reaction repercussions continue through ‘Dealer’s War’ where Jack is first glimpsed entering Heraklion harbour, Crete, still in hiding, on course for Matala. Until he, his girlfriend Julie ‘Jools’ Owens and ex-Vietnam Marine Dan Ericson are forced into a final desperate scam by kidnapping amiable Eddie, the son of Charlie Mondello, an American Capo Mafioso mobster, and smuggling him back to Norfolk, in order to buy off that same retribution. The action comes relentlessly fast, to the shock dénouement, with Eddie blasting his own father to death moment before he’s riddled with a stream of Uzi-bullets. With the Mob beheaded, and power-struggle factions on the loose, Jack is again alone, hiding out, and swearing off the drug-life. As he muses ruefully, ‘I had a lively awareness of the pitfalls attached to hanging out around drugs’. You suspect the aversion will be strictly temporary. The pacing is – no pun intended, addictive. But where Steve Wilson scores hardest – again, no pun, is in his meticulous flourish of detail, Magnum shooters, 350 Matchless motorcycles, and the seedy sub-world of the hazardous sleaze-life which he describes tactile-sharp from first-hand knowledge.
Of course, it’s misleadingly wrong to suggest Dealer’s problems spring directly from the properties of the nefarious substances he deals, rather than from their criminalisation, but the nervous-systems of the two are most likely so inextricably mixed it makes no odds. The end result is the same. Long before the celebrated forays of Irvine Welsh or Howard ‘Mr Nice’ Marks into the same general terrain, I suggest Dealer stacks up well against the new generation of walking-wounded clients surfing in on more recent psychedelic waves, from which Steve Wilson richly deserves to pick up a host of new readers. You know it makes sense!

Loved this piece on the Dealer books which I remember with great fondness from the 80s. Also enjoyed what you wrote about The Lost Traveller. So what happened with the awful Thirteen?