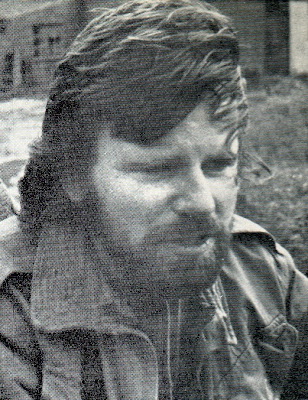 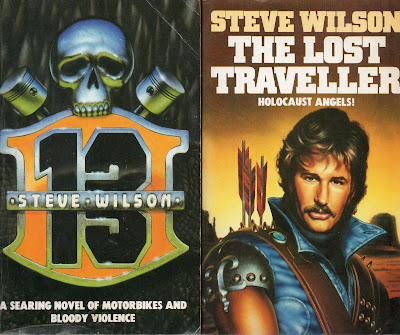 When this feature first appeared in print Steve Wilson was so pleased to have found a reviewer he considered to so-exactly have caught the full nuances of his writing that he immediately straddled his high-powered BMW motorcycle and revved it clear up the M1 all the way to Ossett to stay over and make direct contact. He’s a great guy. We got on fine. I later published one of his stories in an issue of the ‘Ludds Mill’ magazine from Eight Miles Higher. He gave me a copy of the ‘Twelfth Ghost Book’ anthology (edited by Patricia Parkin & James Hale, Barrie & Jenkins, ISBN 0-214-20216X, February 1977) which includes his fine story “Ghosts There Must Be With Me In This Old House”, plus a motorcycle article from ‘Men Only’ (November 1977), ‘The After Midnight Ghost Book’ (edit James Hale, Hutchinson, 1980) with his “O Keep The Cat Far Hence”, & ‘The Twilight Book’ (edit James Hale, Gollancz, 1981) which includes “My Breath Is Inside You”. He also talked about his projected book ‘The Complete British Motorcycles 1950-1977’ (commissioned for Macmillan) which eventually appeared as ‘Classic British Motorcycles: The Cutting Edge – Road Bikes 1950-1975’ (Salamander Books, May 1998). It also led to me writing about his subsequent ‘Dealer’ novel-series…

Posted by Andrew Darlington at 13:57

Thanks, Andy - been a long time.
Steve

Thanks, Andy - been a long time.
Steve

Me again, Andy. Re the postscript: the bike I came to see you on wasn't a BMW (that was the Dealer in the first book, 'Dealer's Move' !). And the first factual bike book(s) were, in 6, count 'em, volumes, "British Motor Cycles since 1950", published by PSL/Haynes. There have been 9 other bike books including the one you mentioned, plus a book for my daughter featuring a talking BSA ('When Rosie Met Anneka',Panther Publishing)and a travel book about a ride I took in 2009 on a 1954 Ariel single from Cape Town to Zambia and back, 'Short Way Up' (Haynes again). But what about you Andy, tell me all. My e-mail is:
swilsonbsa@uwclub.net
Look forward to hearing from you. Steve

Steve Wilson is an excellent journalist and always a joy to read. I've not seen any motorcycle articles from Steve since he published Short way up, maybe he's retired ? Anyway his writing skills are certainly missed as there is a real shortage of quality material in the motorcycle monthlies.

Steve is definitely still writing........
Recently he published a new Bonneville book, a book about Factory Original Triumph's, and I believe he has another book about due?
I recently saw an article by him on the Triumph TRW in Classic Bike as well.
I enjoy his writing style immensely!

Order a professional Sparkling White Smiles Custom Teeth Whitening System online and get BIG SAVINGS!
* Up to 10 shades whiter in days!
* Results Guaranteed.
* As good as your dentist.
* Same strength Teeth Whitening Gel as dentists use.