‘Sperm Futures were up 129 points on Dow Jones...’ Sometimes tomorrows go down so fast you miss the echo. We all did that hard-sharp-fast Mirror-Shades thing. We’ve all got neat nasal-bridge skin-welts from Mirrorshade OD. All those bright shiny postmodern surfaces, those technofutures stitched in with cutting edge buzzword IT product placements (meta-Nationals, Fuji, Versace, Toshiba, Sony). And WOW – wasn’t it cool? Now the major practitioners have not so much moved out as evolved that text mainframe onto other distinct gaming levels. And all that swirly fractel-stuff is looking as out-of-phase as an old Shamen CD, and who gives a shit about THAT anymore? Well, actually, Maltese-born Jon Courtenay Grimwood does. His is a fast-fiction hypertext netscape of logos and glitches with all the moral complexity of a Pot Noodle. Prose that glimmers with the edgy lustre of a de-tuned flatscreen TV. As narcotically-literate and as MDMA-programmed as Irvine Welch, while simultaneously S&M-primed with enough testicle-gouging, twisting and squeezing to make a grown man wince. He did ‘Neo-Addix’ (1997). He writes for ‘SFX’ and ‘Focus’. This is his most high-profile shot to date. And it’s pretty in-tense!

Grimwood’s Twenty-Second Century is relentlessly unpleasant with a ‘morality so relative it’s quantum’. There’s rising male infertility, hence the trade in Sperm Futures, and the unique ‘Fuck-Baby’ status of naturally conceived and nurtured progeny. There’s genetic Vampyres, Kinderwhores, Edgar Allen Goths, and programmed killware, including a DNA-coded hyena primed to self-detonate on contact with its target. There’s also silver-skinned and usually naked Razz who gets her guts blown out, wakes up in a new younger body, then gets superglued to the floor and raped. There’s Count Ryuchi who owns the CySat media conglomerate dealing customised global Tri-Soaps, MTVids and Religious Holo-Porn. He microwaves his wife into a glutinous gel. Alex, a Living God with the Church of Christ Geneticist who work towards cloning the Messiah’s DNA. His augmented brain works at 97.5% neural level (yours and mine struggle to achieve 25%). Then there’s the good Cop. A gene-splice bio-chip composite made up of elements from Judge Dredd and a hard-wired Clint Eastwood Dirty Harry. The kind of Cop who sees the case through despite deliberate obfuscation from corrupt Power-Conspiracies and a society purposefully flushing itself down the pan. There’s lots of subplots too. Each minor character, from the random murder victim to the hire-pilot with vat-grown artificial eyes, have their full histories.

The plot centres on New Venice, like Old Venice – but created in mid-Pacific by the ‘dusted-out bulimic daughter of a West Coast Crime Boss’ to be an ‘island of elective morality in a sea of dissolution’. It’s furnished with high-tech anachronisms, a Neo-Venetian elite decked out as Doge-this or Count-that, and the Levels – sleaze-zones due for imminent amputation. Once intended to be ‘Serendipity written as code’, it’s now a city rapidly peaking towards overload. ‘Lucifer’s Dragon’ is high-density stuff. And it’s self-consciously nasty. It strives for effect There’s brutal sex. It’s crammed with sharp prose (‘office buildings like endless lines of bar codes’) and flashy prose-devices. It post-modernises postmodernism and gives Mirror-Shades a sudden retro hard-sharp-fast appeal. And in among the teeming cultural references there’s one to Leeds-based multi-culture band Black Star Liner, one to a ‘dub electro / Japmix’ of Motorhead (!) and one to the Sisters of Perpetual Indulgence. Last time I saw this outrageous order of transvestite Nuns they were playing live on stage with Chumbawamba at the ‘T&C’. Now there’s an echo worth catching. 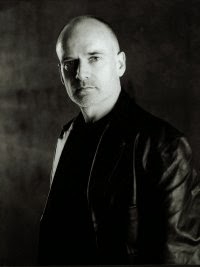