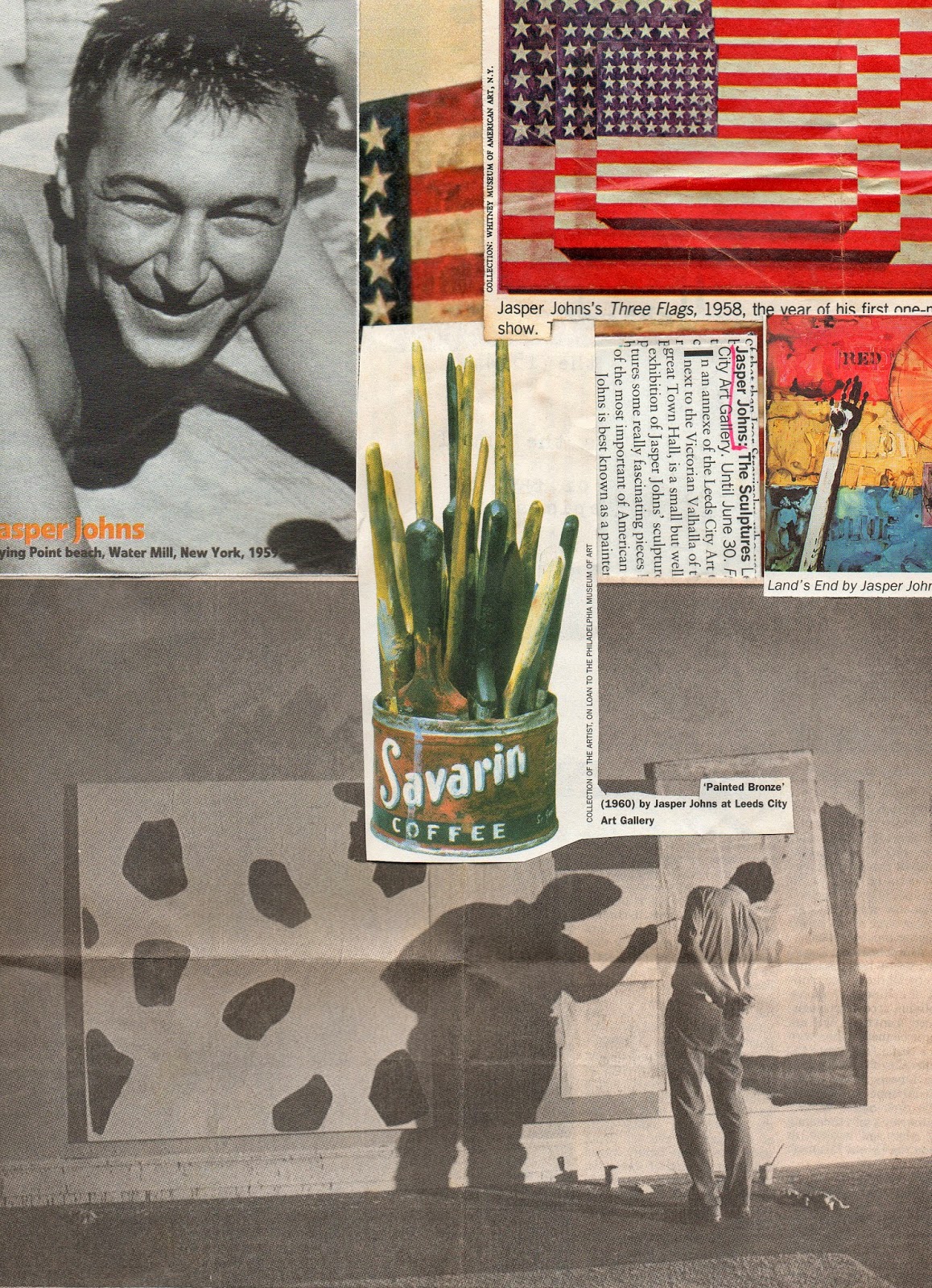 Jasper Johns was the man who made Pop Art ‘probable’,
but what does that mean thirty years later – in 1996?
An exhibition overview of 700 words…

And the Jasper Johns gallery straight between, and through the centre.

It’s Leeds, 1996. And I’m looking through Jasper’s spectacles. But replacing the eyes beyond the lenses are twin mouths. With lips that are wide-parted, teeth-rims visible. The mouths are talking endlessly, in silence. The piece is called ‘THE CRITIC SEES’ from 1964. An assemblage of sculpmetal and glass embedded in plaster. A witty comment on art columnists. These eyes, it says, neither SEE nor FEEL. These eyes speak. These eyes mouth off first, and think later.

Perhaps he was thinking of Herbert Read who described Pop Art as ‘a descent into the eternal funfair which is neither funny or fair, but an inferno’? Actually Johns is not exactly Pop, and Pop Art is actually very often fun. Look at these shoes with mirrored toe-caps. Or the homage to Frank O’Hara, with its opened drawers of sand, each one indent-contoured by a footprint from a plaster-cast sole. Presumably Frank’s.

Of course the ideas had been done before. Teasing subversive Marcel Duchamp had been doing ‘Found Art’ and ‘Ready-Mades’ since the outrage of Dada. But that was done as confrontational art statement aimed at the art establishment. Pop shoved it all to New York, took on consumerism, and made it spectacle (and sometimes spectacles!). Jasper’s panels of overlaid blended 0-9 numbers are a discrete countdown to it all.

I’m in the Henry Moore Gallery in Leeds, 1996. And it’s an irony of sorts. I wasn’t really around for Pop Art. For this selection dates from 1958 to 1964, the pre-Beatles time of Sputniks, black & white TV’s, and John Kennedy. But to me, Pop wasn’t about galleries. It was the cornflake pack on your breakfast table. The comic-book war story on the news-stand. The ad for Hoover vacuum cleaners or Charles Atlas bodybuilding courses in the glossy magazine you’re reading. It was Elvis. It was sex.

Here at Leeds it’s still possible to taste those elements in Jasper Johns’ 1959 painted bronze beer cans. Ballantine Ale. He made this twin-cylindered, neatly hand-lettered object (exhibited three years before Warhol’s soup cans) in reply to De Kooning’s jest about Gallery owner Leo Castelli’s ability to sell anything – even beer cans. And its frothy comic fizz crosses all the decades to now. Elsewhere, in some ways, that element seems to have got lost. Art now is installations and assemblages that again relate art to art. Damien Hirst makes a video for Blur. Gilbert & George cross over into mainstream awareness. Tabloid-speak gets dutifully outraged every now and then, usually at price tags. But interaction with life seldom seem quite as tactile.

Jasper Johns was the first of the Million Dollar Modernists. Of course, he wasn’t exactly Pop. All name tags are vague. But, born in 1930 in Augusta and a former window-display designer for the Tiffany’s store, his 20 January 1958 first New York exhibition of archery targets, letters of the alphabet, and American flags, made Pop Art ‘probable’. He derives from elements of Surrealism, and yet his collisions of the familiar with the banal, his appetite for raw media feedback and Fast Food Art in series, anticipates Pop’s themes and preoccupations. Never shying from close image recycling – one stencilled Arabic 0-9 following another 0-9, one flag following another flag. His sculptural strategy, ‘take an object. Do something to it. Do something else to it’ says it all. Invention. Spontaneity. Improvisation. Fun.

When he makes a ‘FLASHLIGHT (1960) of bronze and glass, or a light-bulb with ripped wires, the bulb’s brief shelf-life fragility is inverted into dulled long-term solidity by being cast in metal. Familiarity given a twist of strangeness.

Jasper Johns is pre/proto-Pop. In 1996 he’s also post/ or ‘art will eat itself’ Pop. And I’m here talking through my contact lenses about flat flags and a three-dimensional quip of a Savarin can with his used brushes impaled in it.

The ‘eternal funfair’ continues…
Posted by Andrew Darlington at 20:09