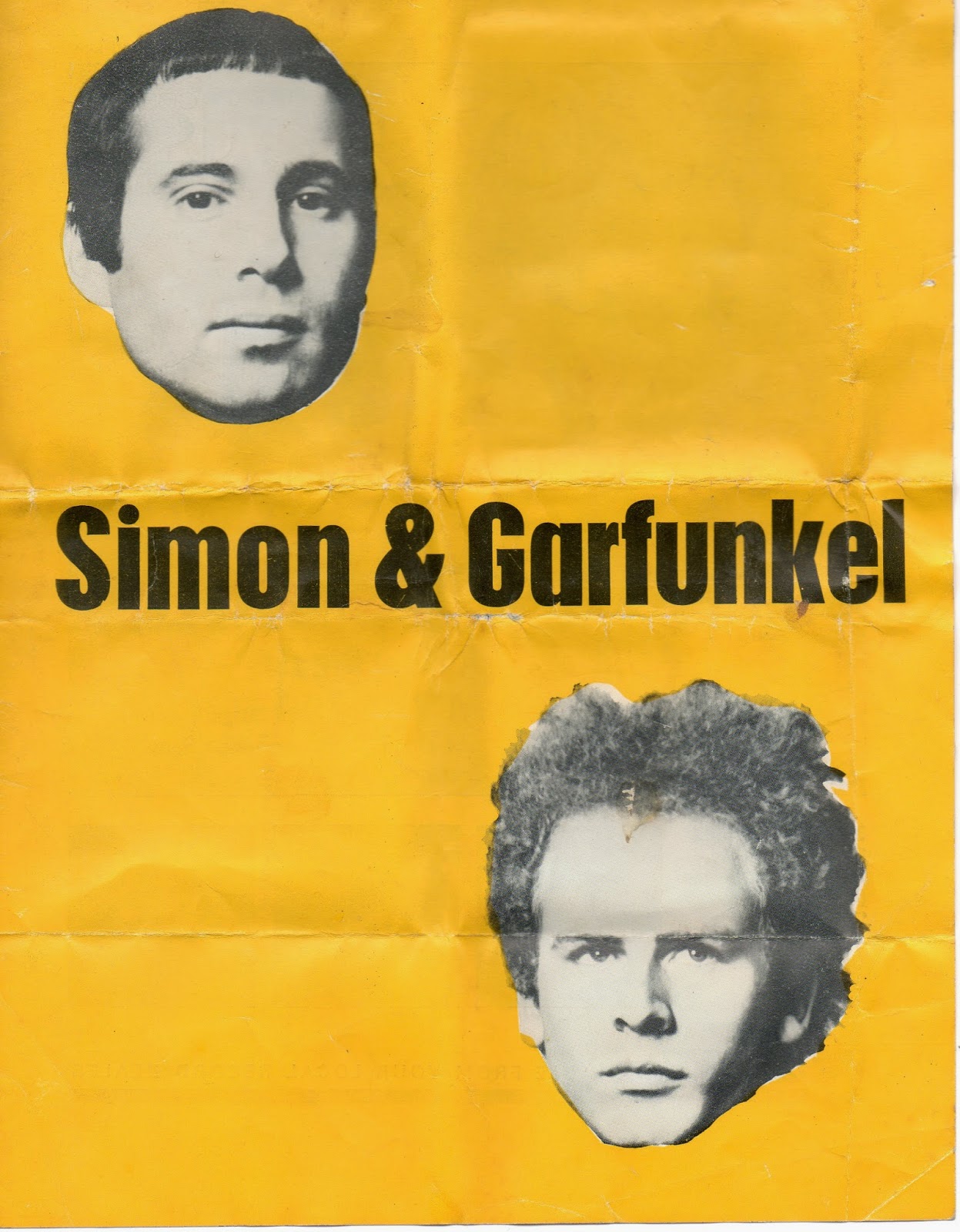 ALL THE SOUNDS OF SILENCE…

After the intermission (yes, there’s an intermission), Paul Simon comes back on stage wearing a deliberately skewed Beatle-wig and hip-twitches through the opening bars of “Wild Thang”. Art Garfunkel playing at paparazzi by aiming a flash-camera at him. At the time it seemed a patronising put-down of a simpler, more mindless music form, a smugly condescending joke neatly counterpointed by Garfunkel explaining the cerebral rigours and creative turmoil behind the duo’s own latest single – “The Dangling Conversation”, replete with its artful analysis of a suspended relationship and its cultural name-drops to Robert Frost and Emily Dickenson. But it also defines something of their odd relationship. First time I heard the line in “Homeward Bound” about the ‘poet and a one-man band’ I’d naively assumed that maybe Simon was the poet, and Garfunkel the one-man band, a kind of equal axis. I was soon disabused of that. Simon fulfils both roles, centre-stage. Art Garfunkel’s part – apart from sweet harmony embellishments, is more the psychological back-up. He’s the prop who aims the camera-attention that focuses on the creative element incarnate. As George Michael needed the supportive-strength of Andrew Ridgley to become Wham!, so Paul needed Art for equally nebulous reasons.

Paul Simon tells a story. Walking the hard New York street he unexpectedly catches his own reflection in a storefront glass window, and thinks hey, you’re looking good, you’re looking cool. He preens a little, poses some… then this sparrow way above poops on his head, neatly puncturing his moment of self-regarding pretention. It gets an informed laugh, and leads neatly enough into their “Sparrow” from the 1964 ‘Wednesday Morning, 3am’ album – ‘Exciting New Sounds In The Folk Tradition’ (edited down to an EP in the UK). It’s a sweet anthropomorphic fable about pity. Verse by verse the appeals of the starving sparrow ‘who’s travelled far and cries for rest’ are rejected by the Oak Tree, the Swan and the Golden Wheat, until the Earth itself agrees to write her eulogy, ‘for all I’ve created returns unto me, from dust were ye made and dust ye shall be.’ A vaguely Biblical solution to the question of social exclusion. 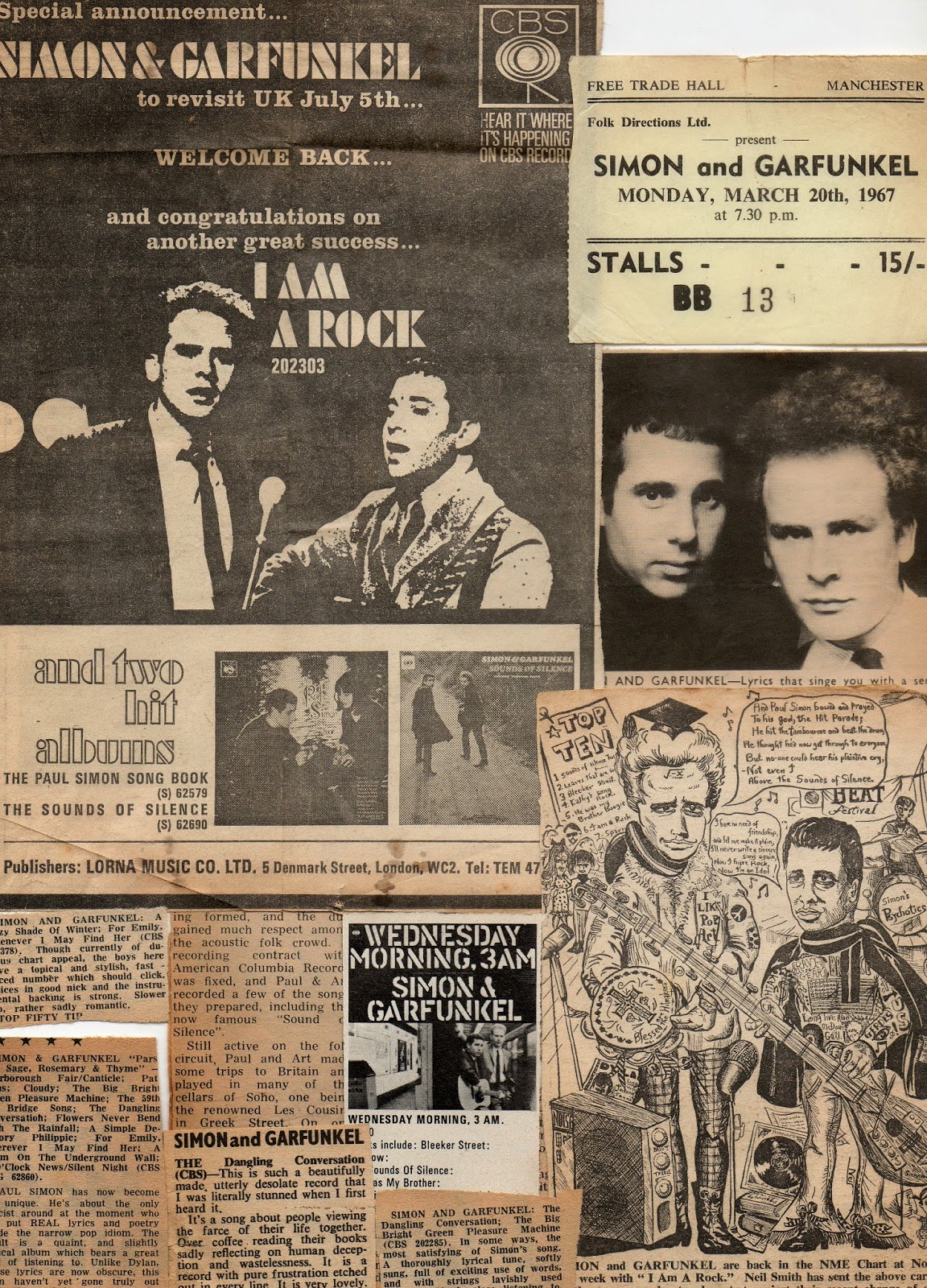 At this time, they were still more cult than they were Pop Stars. The electrified remake of “The Sound Of Silence” may have hit no.1 in US, but it was covered by the appalling Bachelors here in a way that ironically captured the blandness that Simon was railing against. So the original languished unheard. But I was on it in a flash. It had all the jingle-jangle Byrds Folk-Rock poetic elements that made it irresistible, smart lyrics – ‘I turned my collar to the cold and damp, when my eyes were stabbed by the flash of a neon light’ which still sounds good, and the teasing comment on superficial blandness and shallow inconsequence to give it social relevance. Soon I had all three versions, the acoustic duo original, then producer Tom Wilson’s overdubbed hit, plus the solo singer-songwriter take on the ‘Paul Simon Songbook’ (August 1965) album recorded during Paul’s London sojourn.

“I Am A Rock” on that LP ignited a kind of Morrissey-moment. For the socially dysfunctional teenage misfit I saw myself as, it contextualised my life entirely. ‘I’ve built walls, a fortress deep and mighty, that none may penetrate’, surely no-one can write a lyric that perceptive if they’ve not already been there? ‘I have my books and my poetry to protect me, I am shielded in my armour’ – yes, check. “Homeward Bound” took them into the UK Top Ten. But already by the time they’d added the Simon & Garfunkel Folk-Rock brand to “I Am A Rock” as their third straight American hit single the ‘New Musical Express’ cartoonist was performing an electric Bob Dylan ‘Judas’ deconstruction on it as ‘I Am A Rock (‘n’ Roll Singer)’.

I drive cross-Pennines from Hull to Manchester on my Honda motorcycle, and stay at the YMCA, leaving the bike on the street outside overnight. For this is less a Rock gig as a sub-cultural experience. Even the imposing ‘Free Trade Hall’ itself has history. Sister Rosetta Tharpe, Gerry Mulligan, Dave Brubeck and Ray Charles had played here. And the Halle Orchestra called it home too. Dylan’s ‘Judas’ tipping-point into legend had happened here. But this night it was a hall reduced down to a Folk Club, rather than a Folk Club inflated to hall-size. Polite applause. The duo dressed down in roll-neck sweaters and jeans. Short hair. Artie stands with right hand across his chest gripping his left arm. A single guitar. Two voices. ‘The Graduate’, and “Bridge Of Troubled Water” still lying far in the future. 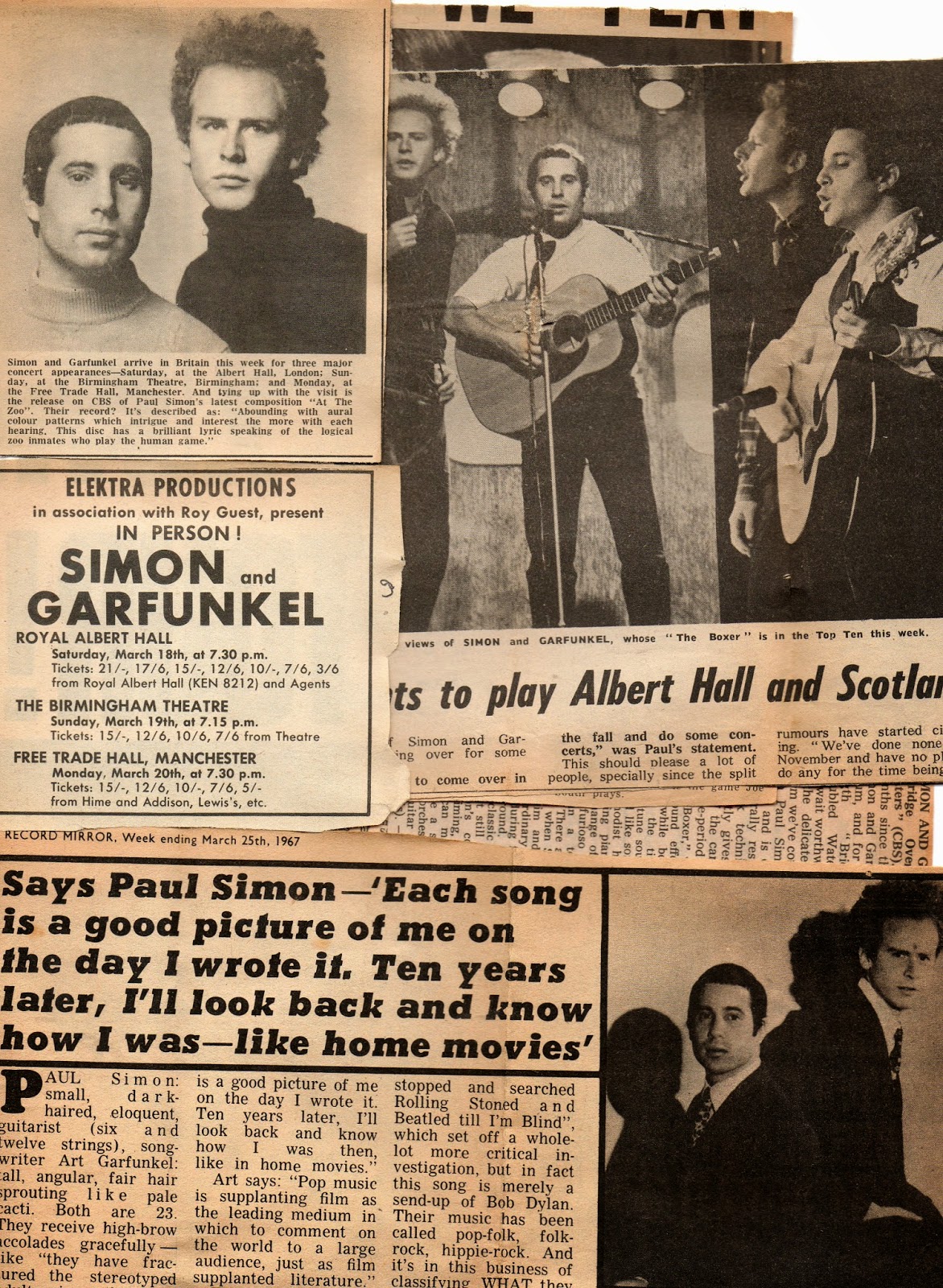 And Paul Simon is very much aware of their intellectual elitist appeal. He describes the debilitating ‘writer’s block’ that froze his output, brought about through the changes following their first run of hits. And about how – driving over the Queensboro fifty-ninth street bridge, his first new song in too long takes shape in his head. But no, Simon & Garfunkel can’t be seen to be associated with a title as trendily simple as ‘Feelin’ Groovy’, so he re-titles it more pretentiously “The Fifty-Ninth Street Bridge Song”. Harpers Bizarre score an American hit with the track, lifting it from the ‘Parsley, Sage, Rosemary And Thyme’ (October 1966) album. But tonight, Simon & Garfunkel come back on-stage to do an unplanned encore. Not something they were wont to do. Paul picks out figures on guitar and announces a new song, one he’s still working on, an uncompleted first verse awaiting middle-eight and development. It starts ‘wish I was a Kellogg’s cornflake’, to amused reaction. The song would become “Punky’s Dilemma” on side two of their next album, ‘Bookends’ (April 1968), which would accompany their major breakthrough with “Mrs Robinson”. 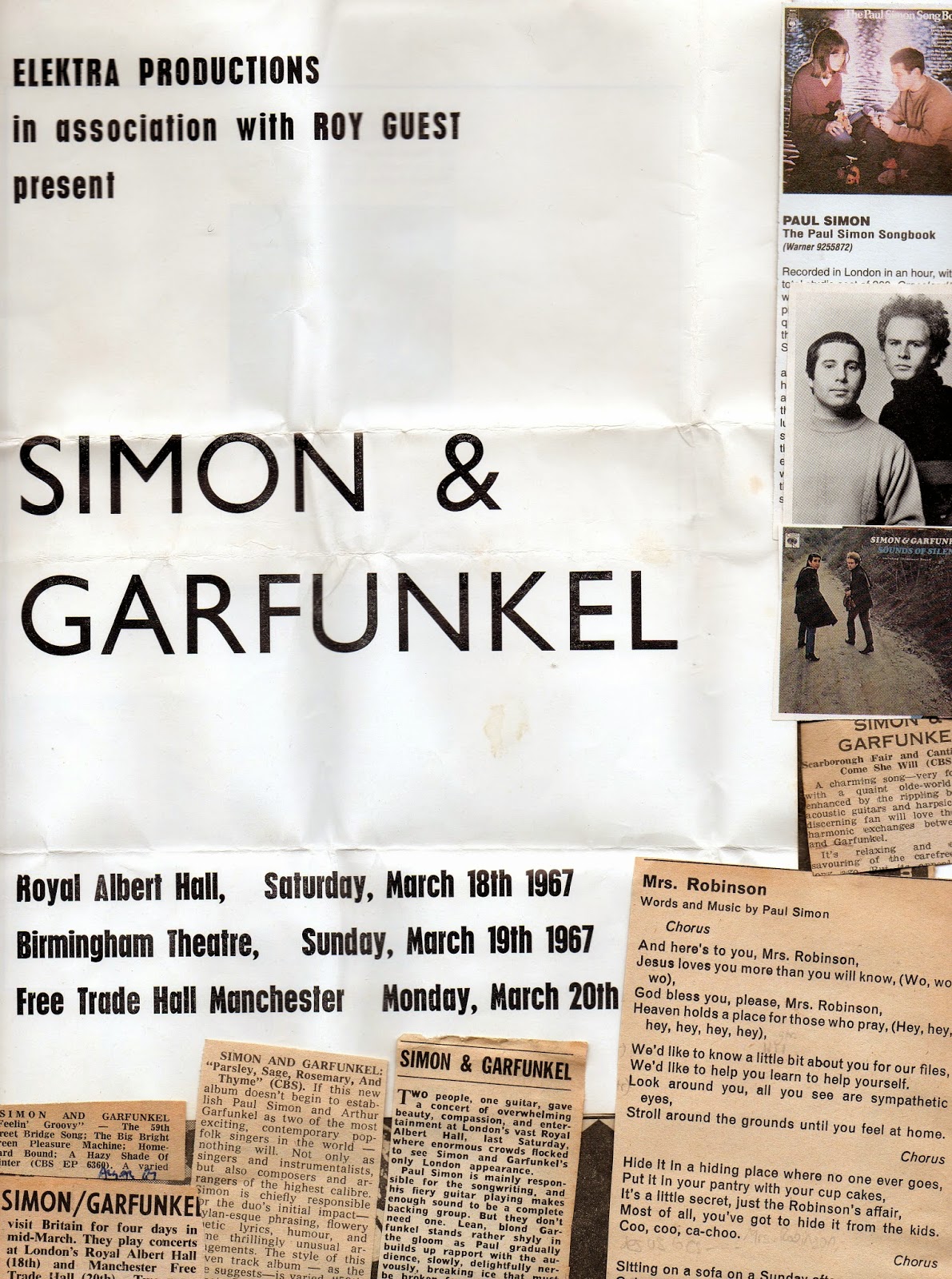 Posted by Andrew Darlington at 20:04

Great memories - I used to play "I am a rock" on the stereogram in my bedroom - later though I sort of questioned the lyrics too - see http://geraldpoetry.blogspot.co.uk/2010/12/lands-end.html