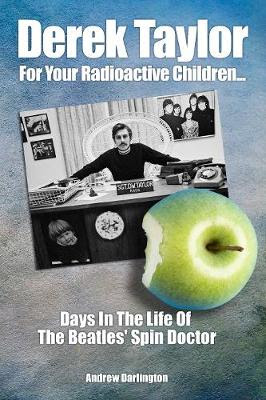 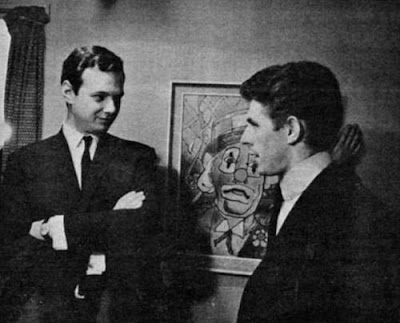 ‘BEATLES FOR SALE’
You can buy this album – you probably have, unless you’re just browsing, in which case don’t leave any dirty thumbprints on the sleeve! There’s priceless history between these covers. None of us is getting any younger. When, in a generation or so, a radio-active cigar-smoking child, picnicking on Saturn, asks you what the Beatle affair was all about – ‘Did you actually know them?’ – don’t try to explain all about the long hair and the screams! Just play the child a few tracks from this album and he’ll probably understand what it was all about. The kids of AD2000 will draw from the music much the same sense of wellbeing and warmth as we do today.
DEREK TAYLOR
(liner-notes to ‘BEATLES FOR SALE’, 1964) 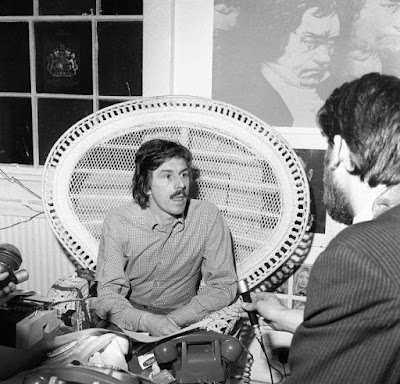 There are a million stories that take place within the arc of Derek Taylor’s life.
Beatles’ historians argue about a lot of things. Like academics in any discipline, they dispute facts and interpretations of facts. But there’s one thing beyond dispute. Derek Taylor’s urbane charm. His easy intelligence, and the value of his contribution to the Beatles’ collective story. And the stories that lie beyond it… if you know what I mean? Derek Taylor lived a charmed life. One that describes a fiery arc that goes all the way from 02:00am, Saturday, 7 May 1932, in the Liverpool 17 suburb of Toxteth Park South, into being a writer best known as the press agent for the Beatles. He became the Beatles’ friend and intimate across a span of thirty years, or – as it’s blurbed on the paperback edition of his fragmented memoirs ‘As Time Goes By’ (1973), ‘journalist, publicist and honorary Beatle’. There’s no shortage of claimants to the ‘honorary’ or ‘fifth Beatle’ status. Starting off with those who were, even for a short while, Beatles themselves. The late Stuart Sutcliffe – who rejoins them for the sleeve-collage of ‘Sgt Pepper’s Lonely Hearts Club Band’, drummer Pete Best, or even Ringo’s temporary replacement Jimmy Nicol. And that’s before you get to Brian Epstein. But Derek’s claim to ‘honorary Beatledom’ is more valid than most. 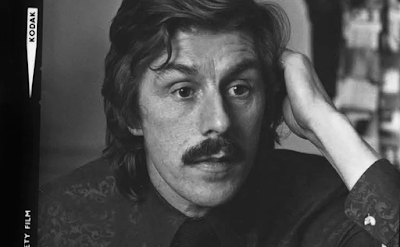 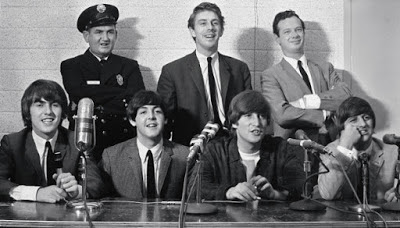 In 1964 he co-wrote ‘A Cellarful Of Noise’, the best-selling autobiography of Brian Epstein. Soon after, he became Epstein’s personal assistant and Beatles press agent. Derek Taylor put spin on stories decades before the term Spin Doctor was concocted, with his droll, idiosyncratic way of speaking. In 1965 he moved to Los Angeles where he started his own public relations company, managing PR for bands like Paul Revere And The Raiders, the Byrds, and the Beach Boys. Brian Wilson called him a ‘PR whiz’ and ‘a colourful slick-talking Brit’. But he could also be a ‘theatrical, slightly conspiratorial man’ according to Ray Coleman. Derek was co-creator and producer of the historic ‘Monterey Pop Festival’ in 1967. He’s there in song when John rhymes ‘Derek Taylor’ with ‘Norman Mailer’ in “Give Peace A Chance”. Then spool forward a few years, to when Derek returned to England to work for the Beatles again as the press officer for the newly created ‘Apple Corps’. 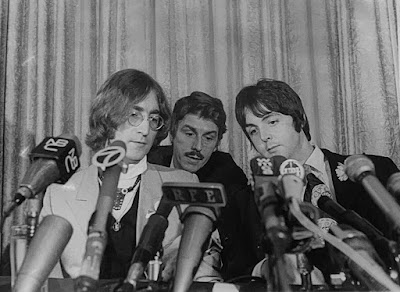 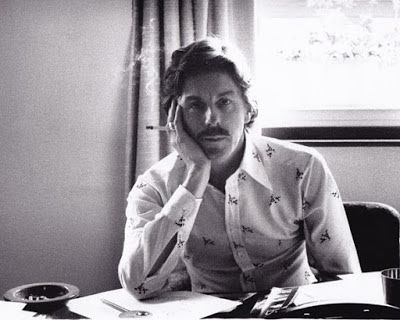 He had a deep capacity for friendship. If there were people who disliked him, I haven’t discovered one. The thread running through the various aspects of this remarkable career is his easy personal charm, his ability to create a sense of delightful complicity. A glittering web of friendships through the austerity of the fifties, the hairstyles of the sixties, into the high decadence of the seventies. His own writing can be flip, humorous, spontaneous, wilfully infuriatingly imprecise when it’s exact detail you’re looking for. ‘As Time Goes By’ seems to be an episodic collection of essays and sketches doodled as the mood takes him between appointments. When names elude him, or perhaps when the possibility of litigation intrudes, he substitutes them for play-names that could have been culled from the John Lennon mind-set of ‘A Spaniard In The Works’ (1965). A legal partnership called Absalom, Bollocks, Profit And Motive Ltd based in New Ponce Street, Mayfair. Or Victor Vagina Associates. Another called A Associate & Associates in Fellatio Drive. Easy to see why he became an intimate of the magic sixties circle, but maddening for academics hunting clues. 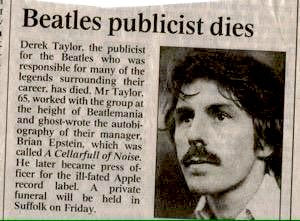 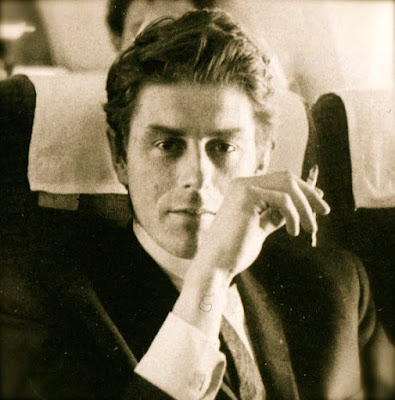 Derek Taylor died of cancer at his home in Suffolk on 8 September 1997, after a long illness. He was sixty-five years old.
There are a million stories that take place within the arc of Derek Taylor’s life. I sometimes feel I have lived the entirety of my own life within them. I’ve spent many hundreds of hours discussing and teasing out details of that time, both in direct relation to, and around the events within which he lived his life. I talked to the late Gene Clark of the Byrds, Dave Davies of the Kinks, Rick Parfitt and Francis Rossi of Status Quo, Grace Slick, Sid Griffin, Mick Fleetwood, Donovan Leitch, Graham Nash, Joe Brown, Sam Moore, ‘Country’ Joe McDonald. To my great regret, I’ve acceded to the few sources with first-hand knowledge of Derek’s personal and musical life who specifically request anonymity. However, to such people I’m indebted for their insight and contributions. A person’s inclusion or exclusion from a sequence does not necessarily infer that that person has contributed to this book. 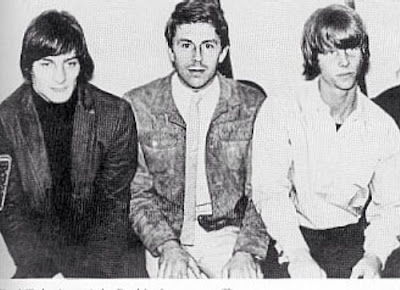 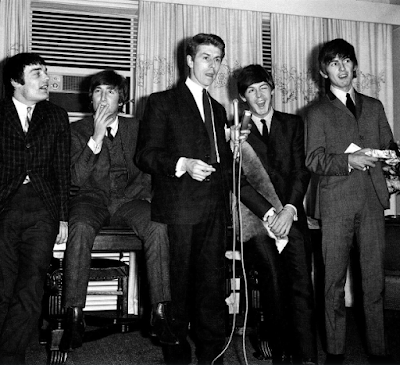 I’ve also conducted research through countless books, magazines and websites and have gratefully given credit accordingly. However, I apologise for those instances where I’ve been unable to correctly attribute quotes, despite my most exhaustive attempts to do so. I invite corrections to such omissions, which will be rectified in future editions. When it comes to sixties history, the forbidding tower of books and perilous mounds of newspaper cuttings, CD and DVD’s, that should be consulted before tackling the project, you wonder, with a doomy sense of futility in the deepest pit of your gut, how it will ever be possible to scratch your way through the veneers of other people’s words and get down a few of your own. When it comes to Beatles-related tales, try to suck any of it into a novel, try and invent it, and chances are you might be gripped and amused, but you’d not be believed. And there are those who find the truth stranger than fiction, but still plump for the fiction.
To Derek, ‘I don’t think that if you have a tidy mind you will find this book easy to follow. But who needs a tidy mind? Who has one? No-one I know.’ 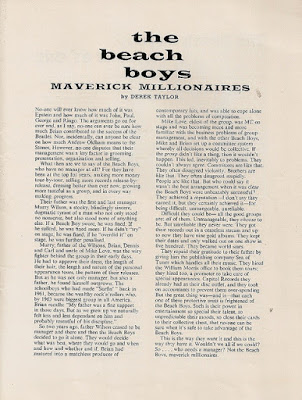 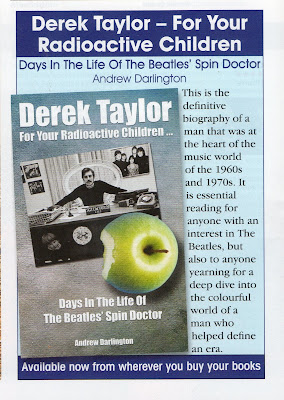 Posted by Andrew Darlington at 15:53