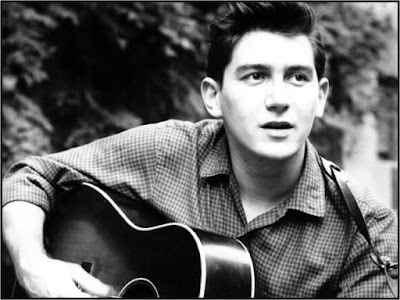 PHIL OCHS:
ALL THE SONGS THAT FIT

CD Review of:
‘ALL THE NEWS THAT’S FIT TO SING’
and
‘I AIN’T MARCHING ANYMORE’
by PHIL OCHS
(Rykodisc/ Hannibal Records HNCD 4427 and HNCD 4422) 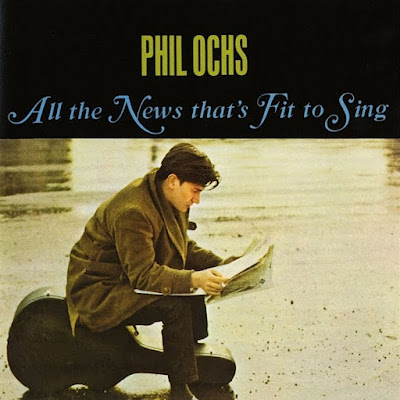 There’s a story Anthony Scaduto tells about Phil Ochs and Bob Dylan sharing a cab. Midpoint in the trip Ochs dares criticise the Zim’s new electric single – and gets thrown out of the car into the chill New York night for his pains. ‘You’re not a Folk Singer’ sneers Dylan with immaculate disdain, ‘you’re just a journalist!’
There’s some truth to that. But more than JUST that.
Of the Greenwich Village Folknik radicals of ‘The Bitter End’, ‘Broadside’ magazine, ‘The Gaslight’ and beyond – it was El Paso-born Ochs (rhymes with ‘oaks’) who’s acoustic chainsaw cut deepest into the most extreme political issues. With his big black quiff and leather jacket, he was a walking soapbox with a relentlessly activist approach that got him expelled from both London and Dublin. When Black Freedom leader Medgar Evers was shot dead 12 June 1963, Ochs wrote “Too Many Martyrs” (for his ‘All The News That’s Fit To Sing’ album), a clear-eyed impassioned cry of anger against the assassination – ‘his colour was his crime’. Dylan’s “Only A Pawn In Their Game” on ‘The Times They Are A-Changin’’ (January 1964) – about that same racist slaying, disposes of such bluntness in the opening line, then expands it into a multi-levelled assault on the subtexts of hypocrisy surrounding the event. Ochs’ singing journalese, news commentary, arch-satiric rhyming copy and ‘Newsweek’ cut-up rejects Dylan’s skipping reels of metaphor and stoned surrealism in favour of stark clarity. But where his topical sloganeering has an incisive lack of ambiguity, it’s also shaped by a fine sense for a tune, and is delivered direct in a palatably flat – but committed deadpan tenor that seldom relaxes its attack. These CDs – his first two albums, from 1964 and 1965, are finger-pointing tirades that exceed the stated dose. 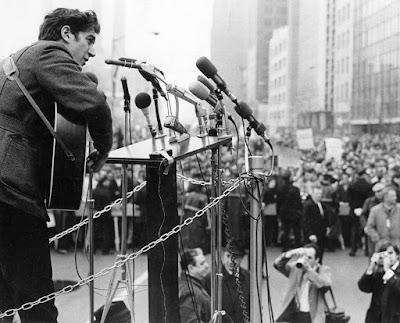 Like Dylan, Ochs’ matrix is taken from Woody Guthrie. Dylan wrote “Song To Woody”. Ochs does it better on “Bound For Glory”, with less contrived intimacy, but a greater understanding of Guthrie’s concern for injustice and the disenfranchised. Then he takes Guthrie’s “This Land Is Your Land” as his model for “Power And The Glory”, celebrating the potential energy of the American people, with a wry disclaimer that their ‘power shall rest on the strength of her freedom.’ Both artists also utilise the ‘talking Blues’ form, Ochs adapting it to both “Cuban Crisis” and “Vietnam” – ‘I regret that I have but one country, to give for my life’ on the first album, and “Birmingham Jam” on the second.
There’s a tendency for Travelling Newspaper issue-songs to get timelocked. And it helps to have a sixties political primer as reference guide to names and events – civil rights, riots, union struggles, CND, and Right-Wing Nasties. Even the one tender love song – “Celia”, is done through the persona of a jailed politico. But to know that is not essential. The anti-war anthem “I Ain’t Marching Anymore” operates on the ‘borders between pacifism and treason, combining the best qualities of both.’ A declamatory “Universal Soldier” variant, it’s uplifting stridency is as relevant to Rwanda or Bosnia as it was to Vietnam. While the jaunty sniping “Birmingham Jam” is as easily transferrable to South African neo-Nazis as it is to segregationalist Alabama.
There’s a bonus track on ‘All The News That’s Fit To Sing’, with the Blues Project’s Danny Kalb on second guitar. While ‘I Ain’t Marching Anymore’ features Ewan (father of Kirsty) MacColl’s “Ballad Of The Carpenter”, alongside “Here’s To The State Of Mississippi” which Ochs will later re-write as his final single – “Here’s To The State Of Richard Nixon”. But both are rich albums dense with intrigue, sardonic subversion, agitational propaganda, biting humour and exquisite songs. However, it was left to Joan Baez to take Ochs best-known song into the chart – “There But For Fortune”, a UK no.8 in July 1965. And Crispian St Peters to score a second – “Changes”, a UK no.47 in September 1966. While Ochs developed from these early statements into edgier, harsher and more beautiful ventures. But unable to resolve his own contradictions between the ‘Chords Of Fame’ and artistic integrity, media-blacklisted and FBI-hounded, he hanged himself 9 April 1976.
Too many martyrs.
It’s rumoured that Bob Dylan is still around. 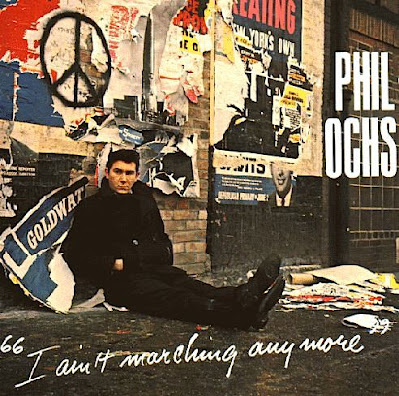 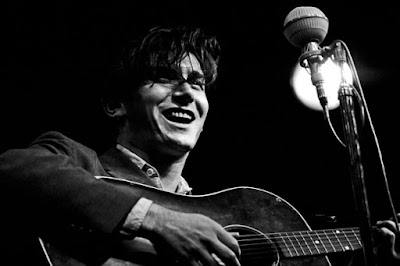 Posted by Andrew Darlington at 14:14