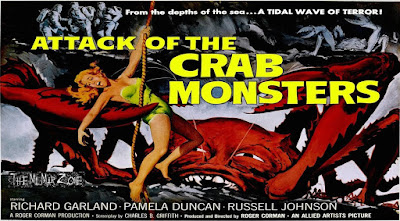 FROM THE DEPTHS OF THE SEA
– A TIDAL WAVE OF TERROR…! 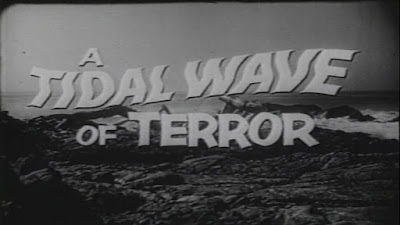 There are still survivors of 1950s atomic-weapons testing trials litigating against governments for reparations. And some of the newsreel footage of those tests is truly scarifying. Squaddies deliberately placed in the blast-zone behind sandbag shock-barriers, issued with only dark-glasses as glare-protection. Not even stylish Ray-Bans! And, naively trusting in the wisdom of their leaders, they await the megaton detonations… people who still suffer the legacy of lethal strontium-90 radiation in bone-cancers and leukemia. But, while not wishing to undermine their justified claims, sometimes truth comes in the strangest of guises. And this one is embarrassingly strange. The defense that people in the 1950s were generally uninformed and unaware of the chromosomal mutational effects of radiation is not entirely true.
Perhaps in an unrealistic, garish and horrifically exaggerated way, but a rash of poorly-made exploitational Drive-In Shocker-Movie Creature-Features prove there was indeed an awareness that radiation is pretty much of a very bad thing, and that it’s generally not entirely beneficial to your health. All Them Giant Ant-Attacks, Prehistoric Monsters rising from 50,000 fathoms, Incredible Shrinking Men and incredibly-growing Fifty-Foot Women, even Godzilla himself happened because of nuclear side-effects. And that’s in addition to all of the dire anti-nuke tales in SF magazines, comic-books and novels that were everywhere during the period, preaching their terrible warnings of atomic-armageddon and the mutie-infested irradiated post-apocalypse wastelands that World War III would leave in its extreme extinction-event wake. 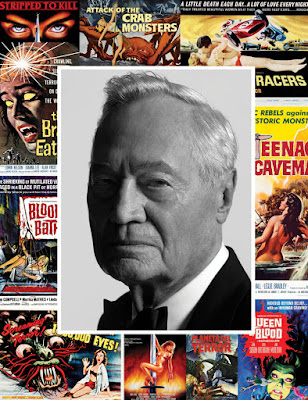 Roger Corman, of course, excels in such stuff. Spinning acceptable celluloid-product from zero-resources, while turning shooting-schedules around in a matter of days, patched together with whatever bits of library film happen to be available. The sudden flights of startled seabirds here look to be spliced-in from some convenient wildlife documentary. ‘Attack Of The Crab Monsters’ (1957) is a perfect example of his tacky art, while the inventive script concocted by the reliable Charles B Griffith ensures that not only are the brain-munching ‘Crab Monsters’ huge, but due to their altered molecular structure, they can talk too! They also have humanoid eyes, which is almost certainly anatomically wrong, but is maybe intended to give them expression – to humanise them (geddit…?)? But first, if the stern biblical opening voice-over is a little off-putting, the nicely surreal beasty-art credit sequence of sunken ships, giant tentacles and killer-fish nicely compensates.
Then, like a lost episode of Irwin Allen’s very wonderful TV-series ‘Voyage To The Bottom Of The Sea’ – which it very much resembles, the action begins with a dingy beaching on a strange Pacific island shore. ‘You can feel the lack of welcome, lack of abiding life’ says the Big Guy in the pith helmet. ‘Something in the air is wrong’. No sounds. No animal noises. This expedition has a dual purpose. The first big H-bomb test blew a nearby island ‘right out of the ocean’ (probably intended to be Bikini Atoll), sending ‘a seething burning cloud’ of fall-out that ‘blanketed the island in ashes and radioactive seawater’. They’re here to investigate its effects. They’ve also been left on this ‘pile’ for a month to hunt out whatever happened to a previous ‘bunch of brains’ from the same Institute, who inexplicably vanished. The omens aren’t good from the start. 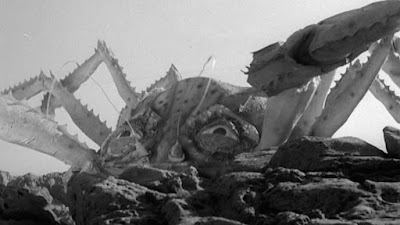 A sailor returning to the seaplane that brought them falls overboard, and they haul him out minus his head. Then the seaplane itself explodes while taking off, as a tropical storm sets in. The now-stranded expedition is headed by nuclear physicist Dr Karl Weigand (Leslie Bradley), in camp shades and a foreign accent. With him are geologist Dr James Carson (Richard ‘H’ Cutting), and French botanist Jules Deveroux (Mel Welles), in the pith helmet. Adventurer Hank Chapman (Russell Johnson), is along as ‘technician and handyman’ while wearing a cool leather jacket. Love interest is provided by brunette Dr Martha Hunter (Pamela Duncan) and Dale Drewer (Richard Garland), sea and land biologists respectively, although she doubles by looking good in tight-sweaters and stretch-slacks. Corman productions are collective operations. Walk-on actor Beach Dickerson doubles as ‘Seaman Ron Fellows’ – and the crab monster operator, while Ed Nelson is ‘Ensign Quinlan’ – and not-very Special Effects, respectively. 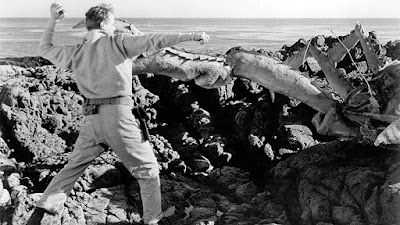 They reach the research station established by the previous McLean team, and read extracts from his journal which warns of ‘five-foot night-crawlers’. There are scary cricking noises in the night. Are they loose electrical-wires blowing in the wind? No, they’re not. Martha dives into the lagoon, sees a big black shape scuttling on the sea-bed, and then hears McLean’s voice calling out to them. It’s all pretty silly, with rudimentary sets shot in faded black-&-white film stock, but the action comes fast-paced. While they’re away the Lab is wrecked with deliberate intent – the radio is smashed, and Dale is attacked by a giant pincer. Then Jules is lured by voices, loses his hand in a rock-fall, and get gobbled by pretty-much the same giant claw. All the while the geologically unstable island is hit by periodic quakes, and is crumbling away piece by piece, chunk by chunk. A mountain vanishes. Another quake opens up a deep pit. Dr Carson ventures down on the end of the rope. He screams. The rope goes slack. And he’s gone.
Entering the pit through connecting sea-caves, they finally come face-to-face with the cunning crustacean, a clattering trundling construct from ‘outside of nature as we know it’. It speaks to them through the medium of metallic objects explaining that ‘something remarkable has happened’. In quasi-scientific gobbledy-gook this irradiated biological freak is made up of ‘free disconnected atoms’, which have assimilated the brain-tissue of those it has ingested, the brain, after all, ‘is nothing more than a storage-house for electrical impulses’. Hence it is McLean, and it is also Carson. But ‘you will all be part of me’ it warns them, ‘we will rest in the caves and plan our assault on the world of man.’ Dr Karl decides the devilish-decapods are vulnerable to de-energising positive energy, so they cobble-together an electronic ‘arc’ weapon. Unfortunately Dr Karl accidentally zaps himself with it, and winds up as crab-sticks. A tsunami devastates the research station, earthquakes rip the island apart. Not much left now. The trio of survivors, Hank, Dale and Martha are cornered by the predatory craboid on the only rocky outcrop left. Finally, Hank brings the sole radio-pylon down on it. Frying the crab, but killing himself in the process. He gave his life so the lovers can go into the abrupt credits clinging to the rocks awaiting rescue.
A fun film, and a terrible warning to us all about the mutational effects of rogue radioactivity. Although I doubt it’ll stand up in court as mitigating evidence in the litigation against governments mounted by survivors of 1950s atomic-weapons testing trials. 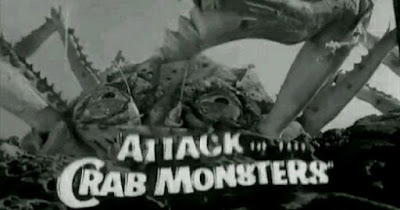 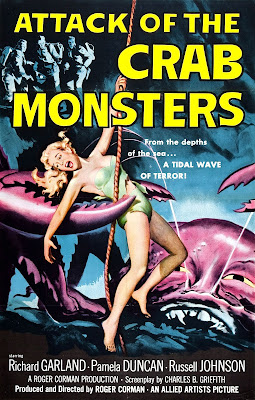