NOT WITH A BANG 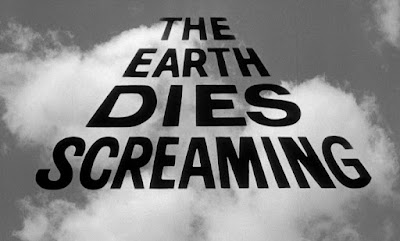 Some slight degree of hyperbole here perhaps?
A train derails. A car explosively impacts into a brick wall. A bowler-hatted commuter collapses on the station platform. A plane plummets from the sky. There are inert bodies littering the street. Sundogs break loose across the sky behind the credits. Pay attention… it doesn’t get more apocalyptical than this! The Earth doesn’t actually die. In fact, what could be described as the action never strays far beyond the limits of the picturesque Surrey village of Shere. And the only screaming that happens in this modest little film is of the kind that the female of the species were prone to in movies of this nature and vintage. ‘This apocalyptic science fiction thriller will scare the living daylights out of you!!!’ screams the DVD blurb. Well, perhaps not. 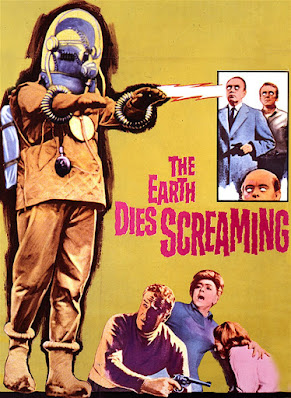 A Land Rover with ‘North England’ insignia corners into the typically quaint ‘Midsomer Murders’ village. There are bodies in the street. The tough no-nonsense driver gets out, searches into the window-display of a small electrical store, and loots a transistor radio. This lone shotgun-carrier is American Test Pilot Jeff Nolan (Willard Parker), assigned to a US/Canada/British aircraft project. After test-flying a vertical rising jet, he’s now trying to make sense of the disaster-strewn world he found waiting on his descent. He enters the Tudor-beamed ‘Manor House Lodge’ hotel bar and tries the TV, but picks up only interference. The same electrostatic he hears on the radio.
When a man with a pistol enters, holding a woman… 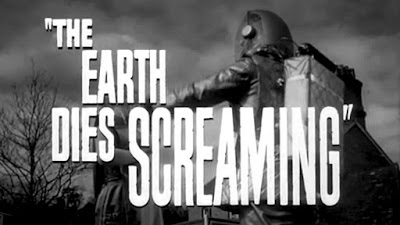 Producer Robert Lippert had been making low-budget films since he founded ‘Lippert Pictures’ in 1945, mostly westerns and crime drama, with only occasional forays into Sci-Fi with ‘Rocketship X-M’ (1950), and – with Terence Fisher, ‘Spaceways’ (1953). Fisher, who also directed Lippert’s ‘Murder By Proxy’ (1954) and ‘A Stranger Came Home’ (1954), was familiar through his groundbreaking work with Hammer, reliably conflating visually-competent movies from very limited financial resources. Using dramatic lighting and camera-angles to compensate for inadequate sets, he’d launched the entire Hammer franchise by directing ‘The Curse Of Frankenstein’ (1957) and its many sequels. His subsequent freelance ventures include this fortuitous reconnection with Lippert, which also offered him the opportunity of working with close friend Thorley Walters. Once Willard Parker’s American name was added to the cast-list, ensuring visibility across the Drive-In circuit, the project was green-lighted. A solid bit-player who’d not only been talent-spotted by Zeppo Marx, but shared screen-time with some of the major stars of the period including Boris Karloff and Mickey Rooney, he’d achieved more recognition as Jace Pearson in the CBS-TV series ‘Tale Of The Texas Rangers’. 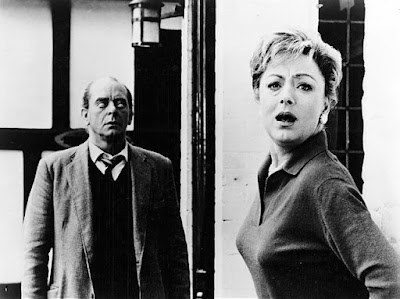 Now the newcomers who promptly help themselves to whiskey from the hotel bar are Peggy Hatton (Virginia Field), who arose from a hospital oxygen tent into the depopulated world, and a smoothly cynical Quinn Taggart (Dennis Price). The faint mushroom smell in the air suggests a lethal gas attack. ‘What happened earlier this morning was no accident’ Taggart coolly decides. ‘Whoever did it, won the war. All they’ve got to do is move in and take over, and then it’s every man for himself.’
The trio are joined by two further survivors, who’d been first glimpsed slumped in a crashed car. Dapper drunk Edgar ‘Ed’ Otis (Thorley Walters) and Violet ‘Vi’ Courtland (Vanda Godsell) in a long evening gown, they’d escaped the gas by sharing a little infidelity in an air-conditioned Lab. ‘I thought you were dead’ says Jeff. ‘Maybe we all are’ he grumbles despondently. It’s Vi who first spots the two slow-moving silver-suited figures through the net curtains. Assuming they’re part of a rescue squad she pursues them, teetering on high heels. The nearest figure raises its hand. Her head glows, and she collapses. From the hotel window they open up a barrage of shots at the receding figures, to no effect. This constitutes their First Contact moment with the aliens. ‘They Came From The Heavens… And Sent The World Into Hell’ screams the DVD strap-line. 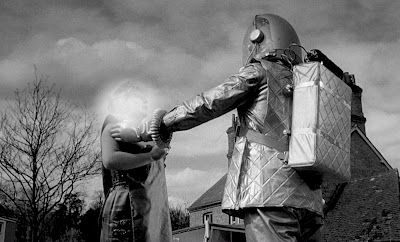 Another car brings two more survivors to complete the disparate group, a surly Mel (David Spenser), and young wife Lorna Brenard (Anna Palk). ‘A cheeky kid and a pregnant girl’ snipes a disapproving Taggart. They’d hidden out in an Air-Raid shelter that was likely sealed against radiation. ‘Maybe those little Men from Mars are back again?’ sneers Mel. ‘We know there’s something out there’ agrees Jeff grittily. Later, as Jeff hurtles to the rescue in his Land Rover he smashes into an alien, only to discover that it is purely robotic. ‘Our own space programme has robot devices designed for use on the Moon and Mars’ he explains helpfully. But aliens aren’t the only hazard. As Taggart prepares to sneak away during the night, the dead Vi comes back to life – her blank eyes devoid of pupils, and he shoots her. These marauding zombies are human slaves of the bulletproof alien machines, emitting eerie electro-throbbing sounds. Peggy is menaced by two lumbering zombies on the hotel stairs, there’s no high-kicking martial fightbacks as we might expect today, instead she flounces away to hide in the wardrobe, although the Walking Dead are so scary they could easily be outpaced at little more than a brisk walk! Nevertheless, the group stock up with weapons from the drill hall at the local Territorial Army Regimental Headquarters.
At any given time, there are never more than two alien robots onscreen. This is not a high-budget production. The effects are minimal. No UFO sightings or predatory descending spaceships, although the penetrating electro-sound effects and the effective music score by classical composer Elisabeth Lutyens add to whatever occasional menace does occur. Peggy waking in hospital into a transfigured world strongly recalls Bill Masen (Howard Keel) in ‘The Day Of The Triffids’ (original 1962 movie). While conditioned-human slaves serving robotic alien invaders recalls the widescreen ‘Dr Who And The Daleks’, which – although the movie with Peter Cushing playing the Time Lord did not arrive until August 1965, reprises the BBC-TV serial version of a year earlier. 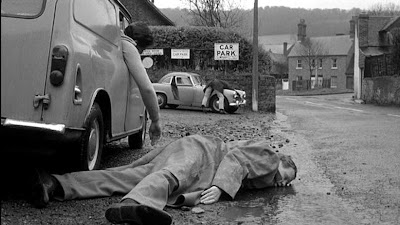 It’s essentially a small-group jeopardy plot, depending as much on internal tensions as external threat, in which rugged responsible Jeff naturally assumes control. ‘You’re very sure of yourself’ accuses Peggy. The foppish Ed drinks himself fatalistically into oblivion. While Mel starts out as insolent and rebellious. He has a box of stolen, but useless money. Yet when Peggy helps deliver Lorna’s baby – to aid the human interest angle, Mel paces the floor outside. And fatherhood helps mature him into Jeff’s strong supportive lieutenant. While Taggart – who derisively calls Jeff ‘Prof’, is effortlessly devious. A veteran of Ealing’s classic ‘Kind Hearts And Coronets’ (1949), Dennis Price’s suave elitist pragmatism steals the film. ‘There aren’t any rules’ he says with existential certainty, ‘there isn’t any order. We can make any kind of world we like.’ Before he slugs Jeff and kidnaps Peggy in a flash sports car, taking his ‘every man for himself’ philosophy literally. 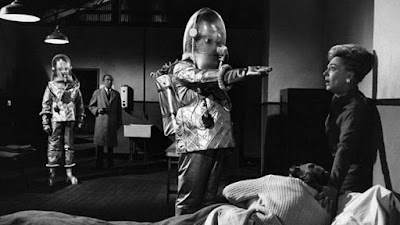 Finally Jeff and Mel triangulate the controlling radio signals that are using a local booster transmitter. Just as robots move in to stop the pylon’s detonation, and more aliens – led by a zombie Taggart menace the women. But once the mast is felled they all collapse inactive, and Ed rallies sufficiently to shoot the zombie-Taggart, discovering his own salvation beyond booze through situational necessity. In a hasty tacked-on closing sequence the group commandeer a plane in order to fly south hoping to contact other survivor groups.
So, although the name will recur as the title of a 1980 UB40 no.10 hit single, in this cinematographic instance, it is not exactly accurate. The Earth does not die screaming. Neither is the film likely to ‘scare the living daylights’ out of anyone, even when it’s viewed from the threadbare stalls of an old-style flea-pit cinema. Although this sharp black-&-white celluloid artifact nostalgically recalls a time when screaming was more fashionable, and scares came with a zero-budget price-tag. 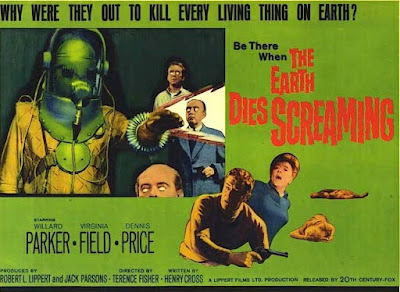 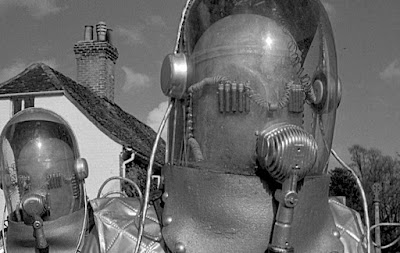 Posted by Andrew Darlington at 17:46